Zelenskyy before the US Congress: no-fly zone against “terror” 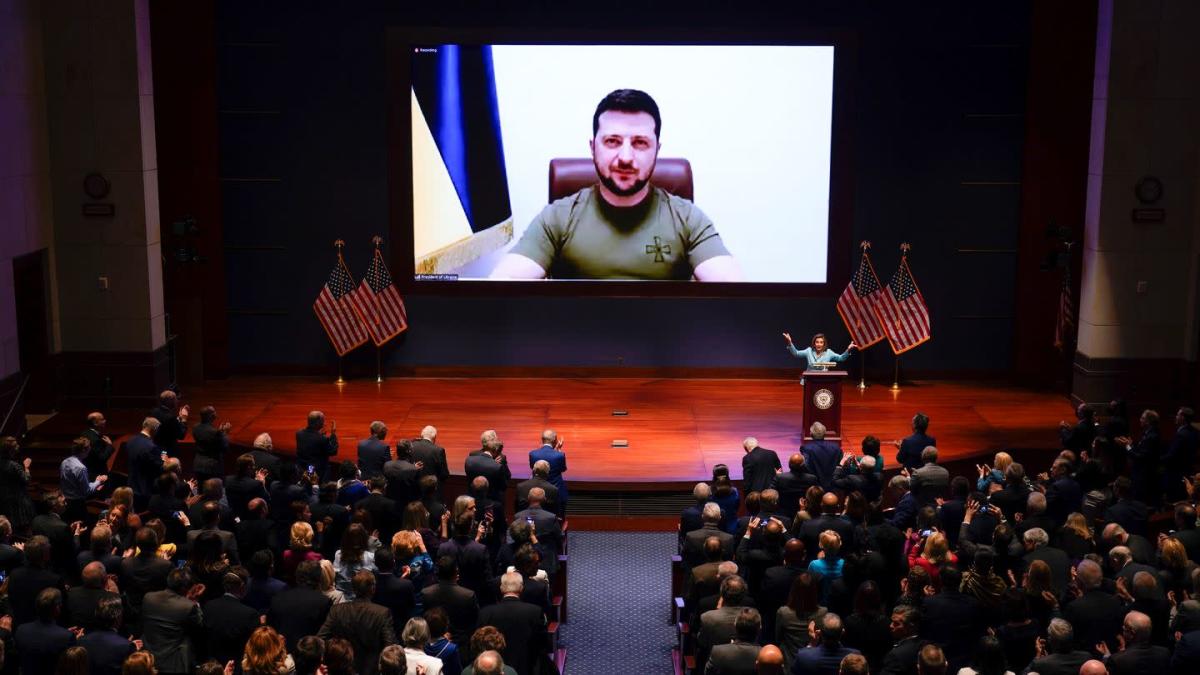 Washington (AP) – In an urgent appeal to both houses of the US Congress, Ukraine’s President Volodymyr Zelenskyj called for more support from Western allies.

There must be new sanctions against Russia every week, while Ukraine urgently needs more weapons and a no-fly zone, Zelenskyy told US senators and members of the House of Representatives in Washington on Wednesday via video link from kyiv. “Now, in the darkest hour for our country and for all of Europe, I urge you to do more,” he said, according to an English translation.

“Russia has turned the Ukrainian skies into a source of death for thousands of people,” Zelenskyy said. Russian forces have already fired some 1,000 rockets at Ukraine and “countless bombs,” he said. A “humanitarian no-fly zone” is necessary so that Russia can no longer “terrorize” Ukrainian cities. “This is a form of terror that Europe has not experienced in 80 years,” Zelenskyj said.

I want you to be the leader of the world

Deputies and senators responded to Zelenskyj’s speech with standing applause. Speaking before both houses of the United States Congress is considered a special and rare honor.

Why the West rejects a no-fly zone

A no-fly zone would make it more difficult for the Russian Air Force to attack targets in Ukraine. However, the application of a no-fly zone by the US or the NATO defense alliance is currently ruled out. Biden and others have repeatedly warned that such a move could lead to a direct confrontation between NATO forces and the Russian military, potentially escalating the war. For this reason, Biden had also rejected Poland’s proposal to deliver MiG-29 fighter jets to Ukraine.

Selenskyj’s calls for more arms deliveries are likely to be more successful. Since the beginning of last year, the US government has provided Ukraine with about US$1.2 billion in military aid, including US$550 million since the start of the Russian war of aggression.

According to US media reports, Biden wanted to announce more military aid of around US$800 million on Wednesday. Other countries, including Germany, have also supplied or promised weapons to Ukraine, including anti-aircraft missiles and anti-tank guided missiles.

In his speech, Selenskyj explicitly called for the Russian-designed S-300 anti-aircraft system. The NATO state Slovakia still has such systems. On Wednesday, the Bundeswehr began moving the US-made Patriot anti-aircraft missile system to Slovakia. This could serve as a backup in case Slovakia ceded its S-300 systems to Ukraine.

Threats between Washington and Moscow

Meanwhile, the US government has warned Russia against using chemical or biological weapons in Ukraine. This would have “consequences” for Moscow, Biden’s national security adviser Jake Sullivan warned in a conversation with Russia’s security council chief Nikolai Patrushev. The White House said Sullivan had made it clear that the United States would continue to support Ukraine, was prepared to take further punitive action against Russia, and would also continue to strengthen the defenses of NATO countries in Eastern Europe.

If Russia is “seriously” interested in a diplomatic solution, it should stop “bombing Ukraine’s cities and towns,” Sullivan said.

On the other hand, Russian President Vladimir Putin accused the West of pressuring Ukraine to continue the bloodshed. “Western bosses” supplied weapons, information and sent mercenaries to the neighboring country, Putin said in Moscow.

On Thursday, Selenskyj also wants to address the German Bundestag with a video address.