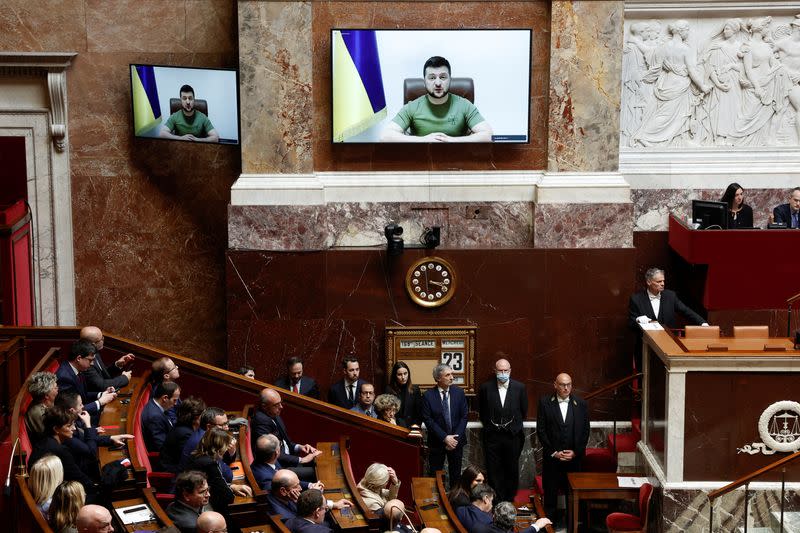 “Renault, Auchan and Leroy Merlin must stop being sponsors of the Russian war machine, stop financing the murder of children and women, rape,” Zelensky said in a videoconference speech to the French National Assembly.

Sitting at a desk in his trademark khaki T-shirt, Zelensky received a standing ovation from French lawmakers after his appeal. At his request, they also observed a minute of silence in tribute to the victims of the almost month-long war.

Renault, which has not commented on its exposure to Russia since the start of the Ukraine invasion, declined to comment on Zelensky’s appeal.

Company sources told Reuters the board of directors would discuss the situation at a board meeting later on Wednesday.

Renault – which controls Avtovaz, Russia’s No. 1 automaker – is among the Western companies most exposed to Russia, where it generates 8% of its top profits, Citibank said.

Two sources familiar with the situation told Reuters that about 10 days ago Renault’s board members considered different scenarios, but decided to keep their presence in Russia for now, with the support of its main shareholder, the French state, and in line with international sanctions.

The sources said the company fears exiting Russia would jeopardize the recovery of the firm, which returned to profit in 2021 after two years of losses. Avtovaz last year accounted for half of its car division’s current profit.

Renault said earlier on Wednesday that it was considering suspending new production at its Moscow plant due to logistics problems.

Leroy Merlin, who belongs to the same Mulliez group as Auchan, also declined to comment. Mulliez also includes ownership of the Decathlon sporting goods chain, which has a large presence in Russia.

Other French companies that have been heavily criticized for continuing to operate in Russia include energy giant Total and food group Danone. Zelensky did not name them, but called on French companies in general to leave Russia.

Moscow calls its actions in Ukraine a “special operation” to disarm and “denazify” Ukraine. Ukraine and its Western allies call it an unfounded pretext for a war of choice that has raised fears of a broader conflict in Europe.

- Advertisement -
Share
Facebook
Twitter
Pinterest
WhatsApp
Previous articlePutin has ‘crossed the threshold of barbarism’ with the invasion of Ukraine: PM
Next articleThe demand for export boosts soybeans and corn in the US; the wheat goes down