Zelensky Says 16,000 Russians Have Died In Ukraine War As Moscow Hints At Scale Down Ambitions 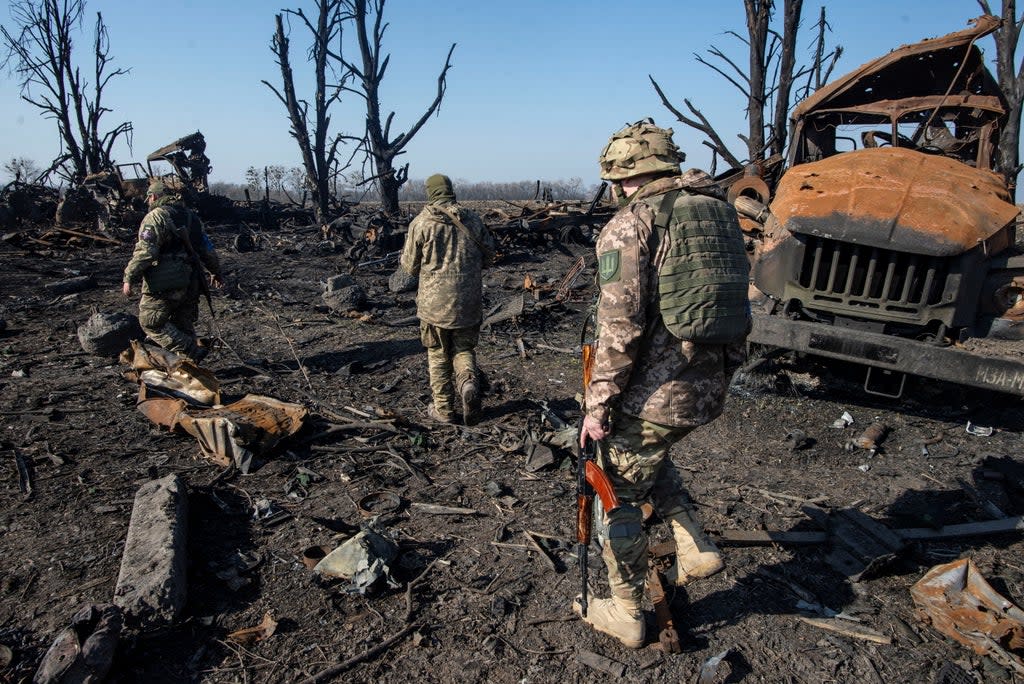 Volodymyr Zelensky has claimed that more than 16,000 Russian soldiers have been killed so far in the Ukraine war.

It comes as Vladimir Putin appeared to be preparing the Russians for a possible downsizing of their ambitions in Ukraine, shifting from seizing kyiv to fighting for control of the east.

On Friday, Moscow said the “special military operation” would now focus on the “main goal, the liberation of Donbas.”

Speaking in his evening speech, the Ukrainian president said that his “heroic armed forces had dealt powerful blows to the enemy.”

Zelensky added that the situation in Mariupol was getting worse, with tens of thousands trapped in the southeastern city without water, food or heat.

He said: ‘The situation in the city remains tragic. Absolutely tragic. The Russian army does not allow humanitarian aid to enter the city.”

Western officials say more Russian battalion groups are heading towards the Donbas, but they stressed that these are the least trained soldiers, with the worst equipment and often with the lowest morale.

One official said: “It is clear that what Russia is acknowledging is that it cannot run its operation on multiple axes simultaneously.

“So it has to concentrate its force, particularly its logistics supply and firepower, on a more limited number of approaches.

“As we see, both with the nature of the operations and with the scale of reinforcement of these new battalion tactical groups that are being incorporated into the operations in and around the Donbas instead of being more evenly distributed around the other axis of advance “.

He added: “It is clear that we are not looking at necessarily taking forces from kyiv and other strategic directions to reinforce the Donbas, but pausing those operations to limit the amount of logistical supply that will be required, either in those defensive positions, to provide the maximum effort they can in the Donbas”.

In Donbas, Ukraine has ten brigades, including its best-trained and best-equipped soldiers, so Russian military commanders will face a battle to win in this region.

Their strategy seemed to be to encircle the Ukrainian forces from the front with separatist forces, reinforced by Russian troops and “Wagner” mercenaries in Donetsk and Luhansk, and to move troops from the Kharkiv area in the north and from the Mariupol region in the west. North. South.

“They ended up instead of being liberators, where they were invited to enter, they really found themselves in a hornet’s nest and they are suffering a lot.”

In the defeated city of Mariupol, authorities said some 300 people were killed in a Russian airstrike earlier this month on a theater where hundreds of people were sheltering.

If confirmed, it is likely to lead to renewed calls for Western powers to step up military support for Ukrainian forces.

In his late-night speech, Ukrainian President Volodymyr Zelensky said that more than 16,000 Russian soldiers had been killed in the conflict and called on Moscow to negotiate an end to the war, but warned that it would not cede sovereign territory.

The former British ambassador to the US, Lord Darroch, believes Putin was trying to reframe his goals, having said from the start that one of them was to “de-Nazify” the government in kyiv.

“I think he is trying to get his version of events out first. It’s a pretty shaky story, let’s face it, but he’s trying to create the narrative in the hope that the Russian people will buy into it and hide how bad this has gone,” he told BBC Newsnight.

The former diplomat said “this was certainly not the plan”, adding: “They did not launch a multi-pronged invasion a month ago to say now that it is really just Luhansk and Donetsk.”

An intelligence assessment by the UK Ministry of Defense said the Ukrainians were continuing to press against Russian forces advancing on the capital.

In other developments, Environment Minister Victoria Prentis told the Telegraph she had taken in a Ukrainian refugee who is a friend of the MP’s daughter.