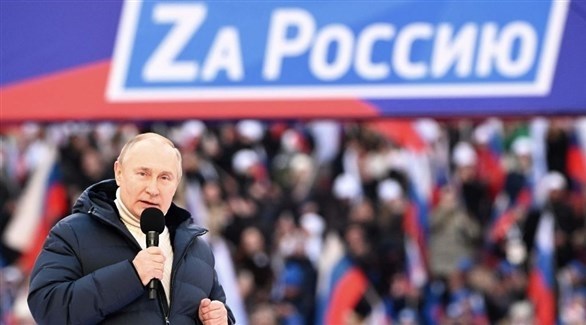 Ukrainian President Volodymyr Zelensky responded to his Russian counterpart Vladimir Putin’s appearance at a Moscow stadium on Saturday by sending a blunt message.

This came a day after Putin praised the “special military operation” in Ukraine, describing it as a “heroic” mission by the Russian military during a nationwide rally at Moscow’s Luzhniki Stadium, in front of tens of thousands of cheering Russians. .

On Saturday morning, Zelensky said in a video message that the number of people, which is 100,000 in front of the stadium, as well as 95,000 in the square, roughly corresponds to the number of Russian soldiers who entered Ukraine.

“Now, imagine 14,000 dead bodies in this stadium, plus tens of thousands of wounded and maimed,” he added, referring to Ukrainian estimates of Russian losses since the war began, figures that could not be independently confirmed.

Zelensky again called for an immediate end to the conflict, adding: “The war must end, Ukraine’s proposals are on the table,” according to the “Ukrainska Pravda” daily.

Russia invaded Ukraine on February 24, and the head of the humanitarian aid team in the capital, kyiv, Oleksiy Kuleba, assured this Saturday morning that at least 50,000 civilians have been evacuated from the conflict zones, to the north and northwest. of the capital, kyiv, and the authorities continue with the rescue efforts of the most affected areas.

Humanitarian corridors have been opened to allow civilians to leave besieged cities and towns, but related agreements have been repeatedly violated.

Advisor to the Ukrainian president, Oleksiy Aristovich, said on Saturday morning that there are more clashes between Russian and Ukrainian forces, at the Chernobyvka airport near the southern Ukrainian city of Kherson.