Zelensky makes fun of the “Nestlé” logo and the company responds 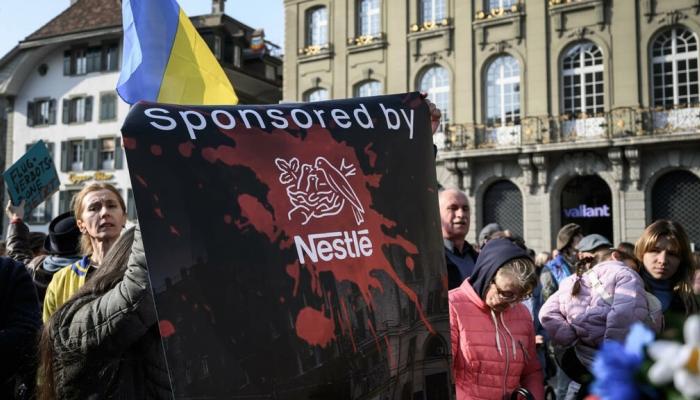 Swiss food giant Nestlé confirmed on Sunday that it is not currently making a profit in Russia.

This came a day after Ukrainian President Volodymyr Zelensky criticized her for her continued activities in this country despite the war and mocked her catchphrase.

On Saturday, Zelensky urged Swiss companies to stop their activities in Russia during a live video address from kyiv to thousands of people gathered outside the Swiss parliament building in Bern.

“Business works in Russia even if our children are dying and our cities are being destroyed,” he said, while people in Mariupol are “without food, water or electricity, and under bombardment.”

A Nestle spokeswoman said on Sunday that much of the company’s activities in Russia have slowed since the Kremlin ordered the invasion of Ukraine on February 24.

“We do not make any profit from our remaining operations in Russia. The fact that we provide basic food to the population, like other food companies, does not mean that we continue our activities as before,” he added.

On March 11, Nestlé announced the suspension of the export of some products to Russia, including Nespresso coffee. But it continues to export some basic necessities, such as baby food and cereal products.

“We are doing everything possible in Ukraine and in neighboring countries to help alleviate this humanitarian catastrophe,” the spokeswoman stressed.

“Our colleagues in Ukraine are doing their best to help the population through food donations.

We are one of the few food companies that are still active in Ukraine and we are able to distribute food, sometimes even in Kharkiv”, a large city in northwestern Ukraine that is relentlessly bombarded by Russian forces.