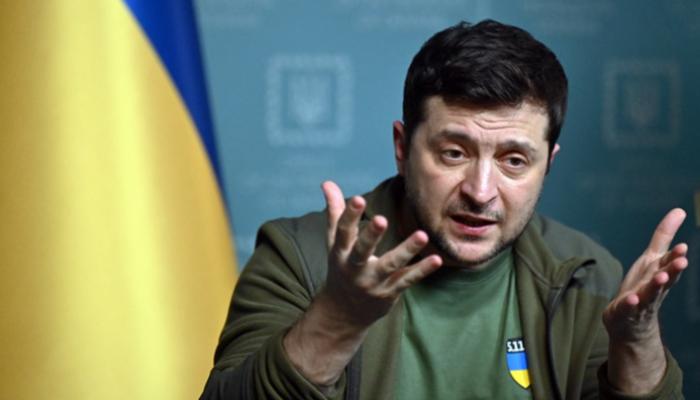 Ukrainian President Volodymyr Zelensky has called for swift sanctions against Russia as the US moved to support NATO in Germany.

Zelensky called on Western countries to include sanctions against Russia, the oil embargo, so that Moscow is not free to escalate its actions towards his country.

In his late-night video address to the Ukrainians, clearly angry, he said the West miscalculated last year by delaying sanctions, which was followed by the invasion.

He explained: “A full-fledged war has started… Now there are many indications and warnings about the imposition of sanctions that are supposed to be stricter, such as the ban on Russian oil supplies to Europe, if Russia uses chemical weapons.”

The Russian invasion of Ukraine more than a month ago, the biggest European conflict since World War II, has left more than 3.8 million Ukrainians fleeing abroad, killed or injured thousands and isolated the Russian economy.

Zelensky said the sanctions should be “effective and serious” given Russia’s actions so far.

The United States has already imposed a ban on Russian oil shipments, but Europe, which is much more dependent on Russian energy, has been more reticent.

While Germany, Europe’s largest economy, stressed that imposing such a ban would lead to widespread recession and unemployment.

On the other hand, the Pentagon announced that it will send Germany six inhibitor aircraft from the US Navy to enhance the capabilities of the North Atlantic Treaty Organization (NATO).

“The EA-18Gs are not being deployed for use against Russian forces in Ukraine,” Pentagon spokesman John Kirby said, “but in line with our efforts to enhance NATO’s defense and deterrence capabilities throughout the country.” from the eastern flank.”

He pointed out that these aircraft are a modified version of the F/A-18 aircraft specialized in electronic warfare and use sensors to jam enemy radars and air defense systems.

He said that 240 Navy personnel will escort these planes to Germany.

In a budget proposal on Monday, the White House revealed plans to spend $6.9 billion to help Ukraine defend against a Russian invasion and support NATO member states.

The United States increased its assistance to Ukraine in the wake of the Russian invasion, including humanitarian and security assistance.

The United States has so far ruled out sending aircraft or other specific weapons systems to Ukraine.

US President Joe Biden said he did not want to cross boundaries that could lead to a “third world war” or pit Russia against the North Atlantic Treaty Organization (NATO).