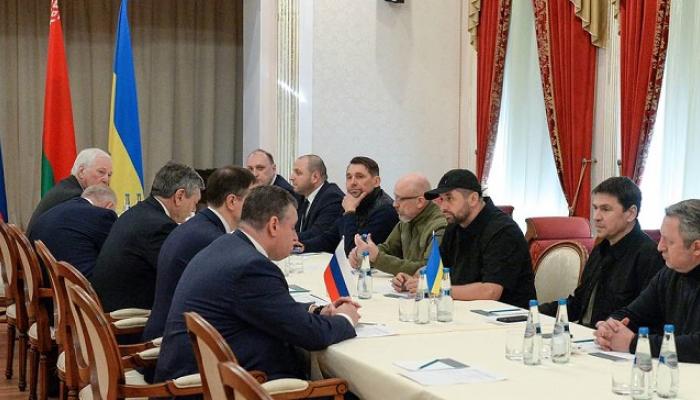 Ukraine’s presidential adviser and negotiator Mikhailo Podolyak said Sunday that his country is working with Israel and Turkey as mediators to finalize the final touches.

on a venue and a framework for peace negotiations with Russia.

“When the agreement is reached, there will be a meeting. I think it will not take long,” Podolyak confirmed on state television.

On the other hand, the death toll from the Russian shelling of the Yavoriv base in western Ukraine rose to 35, after it remained relatively safe from Russian strikes, while another nine died as a result of bombing operations. bombing in Mykolaiv, in the south of the country. , local authorities reported on Sunday, and this comes amid fears that the capital, Kiev, is facing an all-out siege.

The military base is located in Yavoriv, ​​about 40 kilometers northwest of Lviv, where many of the displaced have congregated, and about twenty kilometers from the border with NATO member Poland.

In recent years, the base has been a training ground for Ukrainian forces under the supervision of foreign trainers, especially Americans and Canadians.

“Russia attacked the international center for peacekeeping and security. Foreign trainers work there,” Ukrainian Defense Minister Oleksiy Reznikov said, without specifying whether they were present at the time of the attacks.

“This is a new terrorist attack on peace and security near the borders of the European Union and NATO. We must act to stop this. Shut down the air!” Reznikov said, repeating Kiev’s call for the creation of a no-fly zone. a request rejected by NATO for fear of further conflict.

According to an updated balance announced by the governor of the region, Maxim Kozytsky, 35 people died as a result of the attacks and another 134 were injured.

And it was announced in a preliminary balance that nine people died and another 57 were wounded in the attacks on the base.

Previous attacks targeted a military airport in Lutsk (northwest) on Saturday, killing four Ukrainian soldiers, and the Ivano-Frankivsk airport in the far west.

On the other hand, Polish President Andrzej Duda said in an interview on Sunday that Russia’s use of chemical weapons in Ukraine would be a game changer and that NATO would have to think seriously about how to respond.

Asked if Russian President Vladimir Putin’s use of chemical weapons would be a red line for NATO, Duda told BBC television: “If he uses any weapons of mass destruction, that will change the rules of game in the world.

“Certainly NATO and its leaders, led by the United States, will have to sit down and seriously think about what to do because this will be the beginning of the danger,” he added.

Since the beginning of the Russian invasion of Ukraine on February 24 by the decision of President Putin, the United States has felt that NATO should not get involved in a broader war with Russia.

Western officials said on Friday that Russia might use chemical weapons in a fake attack to find new justification for its invasion, but there was no indication that such weapons would be used on a larger scale in the war.

On Wednesday, Washington denied renewed Russian accusations that Washington operates biological laboratories in Ukraine, describing these accusations as “ridiculous” and indicating that Moscow may be a justification for the use of chemical or biological weapons.

The Russian embassy in Washington did not respond to Washington’s assurances on Wednesday.