“You can no longer fail an exam, but you have to learn everything by yourself” 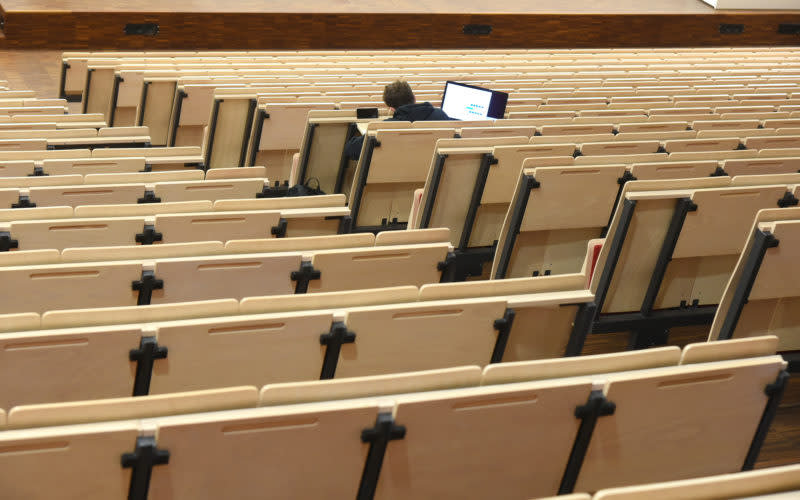 “I’ve been studying for two years and have actually only been to the university five times in that time, each time for an exam,” Jan* tells us. The 22-year-old has been studying at the Technical University of Munich (TUM) for two years. The previous studies of him were carried out entirely during the corona pandemic. The consequences for his studies: “You don’t belong to a group, in that sense you just feel alone.” He also has the feeling that there is no one to answer open questions. He is practically in self-study, because the barrier to asking questions is significantly higher than in face-to-face classes.

Jan told us about her daily life and special exam situations during her studies and about her disappointment at how late she felt her university reacted to the pandemic situation. We then asked several universities across Germany how they had adapted their university operations to the exceptional situation of the pandemic.

We have changed your name at your request because you fear that you will be disadvantaged if you speak freely about your views and experiences at your university.

“At first it was said that the pandemic and the lockdowns were only temporary, so it was not worth building an extensive digital infrastructure”

Jan is one of almost three million students currently enrolled at a university in Germany. His situation shows how strongly the pandemic is affecting those affected in the educational system. Because young people are exposed to a comparatively lower risk of contracting a severe form of Corona, but still make great sacrifices, especially in school and university years. This time is socially and academically particularly formative and can hardly be replaced by online events.

Jan understands that the situation is also difficult for universities, but his patience seems to be exhausted: “At first it was said that the pandemic and the lockdowns were only temporary, so it was not really worth building an extensive digital infrastructure. Only now , two years later, it is slowly starting to roll: all the tools that the university could have used in the beginning are now being used”.

It is quite clear that Jan had imagined his studies differently. He doesn’t want to take all of his frustration out on the university, because there are plenty of professors who work hard and can handle it well. “But getting used to it took an incredible amount of time. Only now, some professors learn to do it, but many still don’t.” That’s why she just couldn’t understand how late her university reacted to the situation to develop adequate infrastructure and make the lessons more digital.

However, TUM -the university where Jan studies- says that the quality of the courses is currently given because “extensive experience in digital and hybrid teaching” had already been accumulated before the pandemic; Jan’s reports describe the opposite.

“There was a big protest from us, it was ignored”

He also reports on one of his professors, who is said to have refused to take online courses: “He justified it by saying that we gave everything we had to learn and that he was happy to answer any questions via email. But he would think it would be silly to hold Zoom events. Then we wrote the exams, even though we hadn’t had any teaching preparation for two months. We are all a bit speechless. There was a big protest on our part, it was ignored. Only when the corona numbers dropped did he go back to offering in-person events. But otherwise no.”

The TUM, for its part, speaks of an “internal quality management system” that would constantly evaluate the current situation. In this way, it could ensure “that the learning objectives defined for the courses and modules can be achieved comprehensively”. Here, too, Jan’s experiences differ greatly from the statements made by her university. He tells how the students were simply exposed to the digital will and skills of the teachers.

Is there not now a certain basic standard in Germany, according to which universities teach and assess more or less uniformly after two and a half years of the pandemic? The answer is usually “No”, because there is a constitutionally guaranteed freedom of education, also known as academic freedom. According to this, university professors are free to design their courses in terms of content and methods, or apparently simply not to design them. But shouldn’t the quality of a degree and the courses it contains for students be guaranteed in the same way?

At least the Hamburg University of Technology (TUHH) seems to have found a middle way: because your university would, of course, provide the proper guidelines each semester. As far as possible, face-to-face teaching was opted for, “so that the students had the same conditions of the quality framework to which they were accustomed.” All students and teachers had to adhere to these specifications. Certain norms are therefore compatible with freedom of education.

Another big drawback to self-study and lack of group membership is the lack of sharing with other students in the lecture hall, Jan says. “I would really like to ask what and how others are learning and if I’m even going to go. the right direction. Now it’s more like trying to learn as much as possible and not being able to concentrate at all. That increases the pressure enormously during the exams, because here you are also left quite alone.”

So how are universities reacting to the increased pressure on exams, even without a pandemic?

The TUM explains that they accommodate students taking the exams on a voluntary basis. This means that there are no compulsory registrations for the exams and there is no standard period of study or compulsory semesters. Students can use as many exam semesters as they need during the pandemic.

The Humboldt University (HU) Berlin even goes one step further: exams that have been taken and not passed since the summer semester of 2020 are considered as not taken. Of course, this mainly affects the grade point average. This improved from 2.53 to 2.25 in the pandemic years; the 5.0 rating, which is drastically deteriorating, no longer exists, making a comparison of GPA to pre-pandemic years not exactly meaningful.

TUHH has also made additional adjustments to compensate for difficulties in student exams. “For example, it was possible to cancel exams at short notice, rules were made for failed attempts, and individual rules for exams were also made.”

“I hardly know normal university life, but then at the end of the semester, I sit in a tent for four hours wearing a mask to take the exam”

Jan is already relieved by this. However, he wonders why he should stay home for lectures all semester, but he can set up the necessary infrastructure for face-to-face exams. “This is probably due to the fact that online exams would in turn be too much of a strain for teachers and principals. Of course, that’s frustrating, because I barely get to know normal university life, but then at the end of the semester, I sit in a tent for four hours wearing a mask to write the exam.

The TUM justifies it by saying that the challenge of face-to-face exams was felt even more clearly than in the courses. “This is due to several factors such as the comprehensive control of hygiene standards and also the legal provisions that prescribe a simultaneous alternative offer in attendance at a large part of the electronic exams.”

The TUHH, for its part, argues that the different phases of the pandemic and the different prescribed distancing rules made flexible room and hygiene concepts necessary. Consequently, the infrastructure would have had to be adapted again and again. Apparently this flexibility could only be given for exams.

Jan adds that don’t forget that “an online exam like this, at least the one you always hear about from other universities, tends to be easier. So it can be frustrating to look left and right at friends from other universities who just they have online tests with multiple choice tasks. courses and exams. Even if she knew, of course, that she had chosen a difficult course of study.

However, the universities tell us that they would regularly exchange information with other universities in the respective federal state in order to coordinate the corona regulations. There would also be various university conferences for this. Here, too, Jan’s experiences differ from the statements made by the universities.

*Name has been anonymized to protect the person