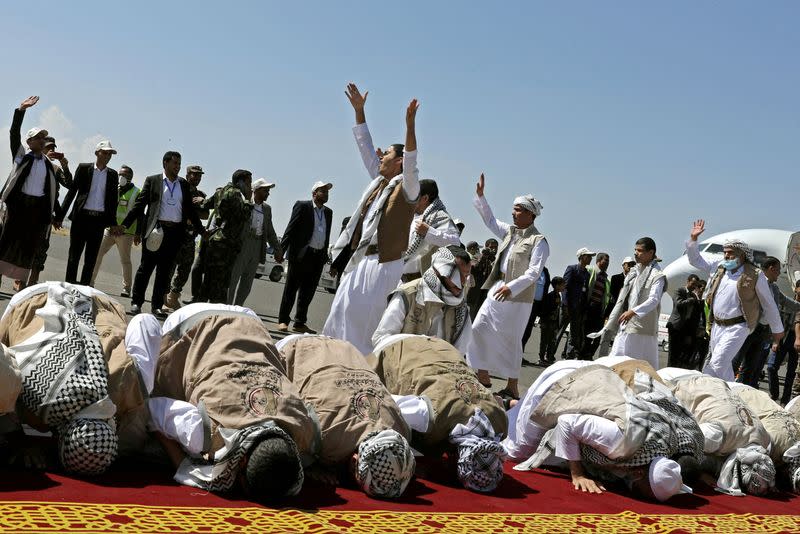 RIYADH (Reuters) – Yemen’s warring sides are discussing a possible prisoner swap that could free hundreds of detainees, including 16 Saudi nationals and a brother of the Yemeni president, officials said on Monday.

A deal between the Saudi-led coalition and the Iran-aligned Houthi movement could help reduce violence and boost UN efforts to broker a truce during the Muslim holy month of Ramadan, which begins in April, analysts say.

The initiative comes as the war enters its eighth year, with an escalation of violence in recent months. The conflict has killed tens of thousands of people, mostly civilians, and left millions facing hunger and disease.

Houthi official Abdul Qader al-Mortada said on Twitter that the deal, under the auspices of the United Nations, could free 1,400 Houthi prisoners in exchange for 823 coalition prisoners, including 16 Saudis and three Sudanese.

The release of the brother of Yemeni President Abd-Rabbu Mansour Hadi and former defense minister Mahmoud al-Subaihi is also being discussed, he said.

Mortada, head of the Houthis’ national prisoner affairs committee, added that the two sides will exchange their prisoner lists on Tuesday.

An official in Hadi’s Saudi-backed government said no final deal had been reached.

“The issue is under discussion. When there is final approval, a formal note will be sent to the (UN) envoy’s office and published,” said Hadi Haig, head of the government delegation to the prisoner talks.

A senior official from the UN envoy’s office in Yemen also said no final agreement had been reached.

On Saturday, the Houthis said they would suspend missile and drone attacks on Saudi Arabia for three days in a peace initiative that it said could be a lasting compromise if the Saudi-led coalition stopped airstrikes and lifted port restrictions.

This followed a call by the UN Special Envoy for Yemen, Hans Grundberg, for both sides to agree to a humanitarian truce.

Saudi Arabia will also host a meeting on Tuesday with several Yemeni parties in attendance. The Houthis said they would participate in the talks only if they were held in a neutral country.