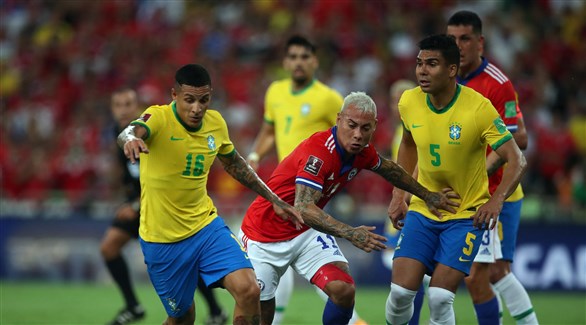 The Brazilian team continued its outstanding start in the South American qualifiers for the World Cup, beating the Chilean team 4-0 on the penultimate day.

“Samba” raised his score to 42 points, at the top of the qualifying table, 7 points ahead of his Argentine pair, knowing that the two teams qualified early for the final before the matches of this round.

Chile’s balance froze at 19 points, falling to seventh place, one point behind Colombia, and the conflict between both teams and Peru (21 points) for fifth place, whose owner qualifies for the world qualifying match against the fifth Asian qualifier.

The Brazilian team translated its total superiority in the first half into two late goals, scored by Neymar da Silva and Vinicius Junior, in the 44th minute from a penalty, and the first of extra time in this half.

In the second half, substitute Philippe Coutinho added the third penalty goal in the 72nd minute, while fellow substitute Richarlison scored the team’s fourth goal in the first minute of extra time.

And the Brazilian team imposed its hegemony in the match from the first minute, as it surrounded its Chilean guest in the penalty area most of the time.

Despite the clear superiority of the ‘samba’ in the first half, missed opportunities continued for the team’s two stars, Neymar da Silva and Vinicius Junior.

The Chilean defense managed to stop the Brazilian attempts on several occasions, while goalkeeper Claudio Bravo did the rest.