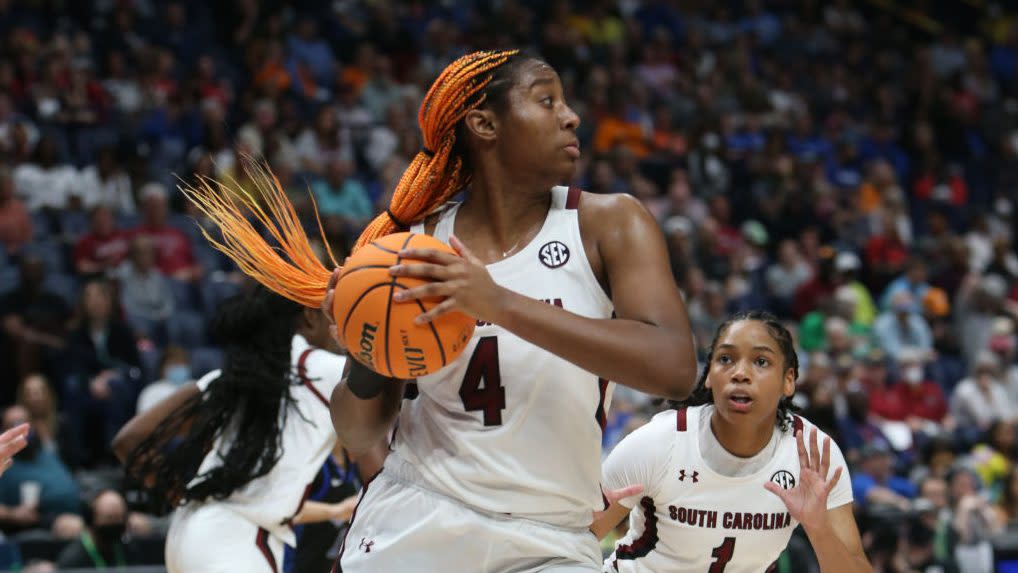 Dawn Staley and South Carolina are once again the No. 1 seed in the NCAA Women’s Basketball Tournament, a familiar role for the Gamecocks.

South Carolina earned the first overall seed in the field for this year’s tournament, which was announced Sunday night. The Gamecocks have been No. 1 in a region six times since 2014.

The women’s tournament itself is also returning to a familiar setting.

For the first time since 2019, the tournament will feature games on campus with fans in the stands.

“I think the semblance of normalcy, I hope it brings some good feelings and the excitement and buzz that is part of this event, which is what makes it so great, is the fans,” UConn coach Geno Auriemma said. “I think having them back will make all the difference in the world.”

The Auriemma Huskies are the No. 2 seed in this year’s competitive field.

North Carolina State, Stanford and Louisville are the other No. 1 seeds.

Staley doesn’t buy the argument that, as the top seed, his Gamecocks will have an easy road to winning their second national championship.

“They said the No. 1 seed overall has an easier path to the Final Four. I don’t see that,” Staley said. “But I do think we’re going to play our best basketball from here on out.”

Potentially waiting for Aliyah Boston and the Gamecocks in the regional final could be Caitlin Clark and No. 2 Iowa in a matchup of two of the best players in the game.

While there will be a lot of familiarity with the tournament, there are also some big changes, including expanding the field to 68 teams.

This year’s bracket grew to coincide with the men’s field with play-in games on Wednesday and Thursday. The Gamecocks, who lead the Greensboro region, will face the winner of Howard and Incarnate Word, one of the first four games.

Expanding the field was one of many changes to the women’s basketball tournament in the wake of inequities revealed in the NCAA last season.

North Carolina State is the top seed in the Bridgeport region and could face UConn in the regional final. The Huskies are finally on the mend with reigning Associated Press Player of the Year Paige Bueckers working to recover from a knee injury that sidelined her for two months.

“They have all the pieces, all their players playing,” said women’s basketball selection committee chair Nina King. ”Regarding Bridgeport, we put teams in the seed lines on an S-curve. When we put them in regionals we try to stay true to the S-curve. … That’s how it went this year and that’s why Connecticut is in Bridgeport. ”.

AN NCAA TOURNAMENT FIRST: The March Madness brand will be used for the 2022 NCAA Women’s Tournament

Defending champion Stanford heads the Spokane region. The Cardinal came through the Pac-12 and will try to win a second straight national title. Texas, which won the Big 12 on Sunday, handed the Cardinal one of its three losses this season.

Louisville is the top crop in the Wichita region. The Cardinals were the most surprising of the top seeds, edging out No. 2 seed Baylor after the Bears lost in the Big 12 title game.

The NCAA announced the selections on Sunday for the first time since 2006 this year. Officials expect the ad to return to its normal Monday night time slot next year. NCAA officials would also like to play next year’s opening-round gate games at a neutral site, similar to the men’s event in Dayton, Ohio.

As part of a return to normalcy, the top 16 seeds will host the first and second round games. Last year, the entire tournament was played in a makeshift bubble in San Antonio due to COVID-19 concerns. However, as the coronavirus continues to affect the country, the women’s pool, like the men’s tournament, has teams waiting in case a school is unable to play due to COVID-19.

King said the first four teams in the queue are Boston College, Missouri, South Dakota State and UCLA. But the NCAA hopes to be able to play the tournament at all of its normal locations, including on campuses during the opening weekend.

Bridgeport, Connecticut; Greensboro, North Carolina; Spokane, Washington; and Wichita, Kansas, will host the regionals and Minneapolis is the site of the Final Four on April 1-3.

Longwood, IUPUI and Incarnate Word will make their first appearance in March Madness, a phrase that women can use for the first time. Incarnate Word became the first sub-.500 team to play in the tournament since 2015.

The Southeastern Conference and the Atlantic Coast Conference led the way with eight teams each in the field.

More of In your territory

Oksana Masters becomes the most decorated US Winter Paralympian of all time Poulin (who else?) scores OT winner in US-Canada rematch In sledge hockey, co-ed solo name, women are building their own Paralympic…