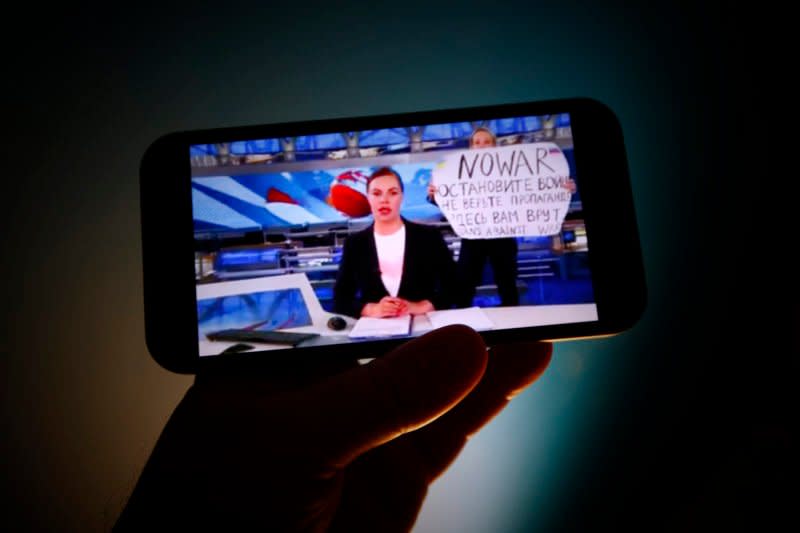 An opponent of the war broke into Russian state television news with a protest sign and loud shouts.

During the live broadcast on Monday at 9 pm Moscow time, the woman suddenly jumped into the picture behind the presenter Ekaterina Andreeva and held up a banner reading “Stop the war. Do not believe the propaganda. Here they are lying to you.” “. She shouted out loud several times: “No war, no war, no war!” The transmission was then interrupted and footage of a hospital was shown.

The excerpt from the video spread immediately on social networks. Above all, the Russian opponents praised the woman for her bravery. “What courage really means,” pianist Igor Levit wrote on Twitter. In Russia, the media is prohibited from calling the Russian invasion of Ukraine a “war” or an “invasion.” Instead, there is official talk of a “special military operation.” Violators face up to 15 years in prison.

According to Russian media and journalist reports, the woman’s name is Marina Ovsyannikova and she is an employee of the state broadcaster. A previously recorded video circulated online, in which she said she was ashamed of years of spreading Kremlin propaganda. “What is happening in Ukraine is a crime.” Only Russian President Vladimir Putin is responsible for the aggression. He called on his compatriots to protest against the war. “It’s up to us to end all this madness.” The authorities could not lock everyone up.

Ovsiannikova also criticizes her own inaction against Putin and that of Russians in general: “We were silent in 2014 when it all started. We didn’t go out to the demonstrations when the Kremlin poisoned Navalny. We just silently watched this misanthropic regime.” , according to the opponent of the war.

In fact, Russian opposition leader Alexei Navalny’s camp now wants to support the woman. They want to take over the sanctions that could be imposed on them, Maria Pewtschich of Navalny’s FBK organization wrote on Twitter on Tuesday. It is said that Maria Owsiannikova was already arrested after her action.

In a statement, the first Russian TV channel only spoke of an “incident” during the “Vremya” program and announced an internal review.