With these three special ships, Germany is supposed to get rid of Russian gas 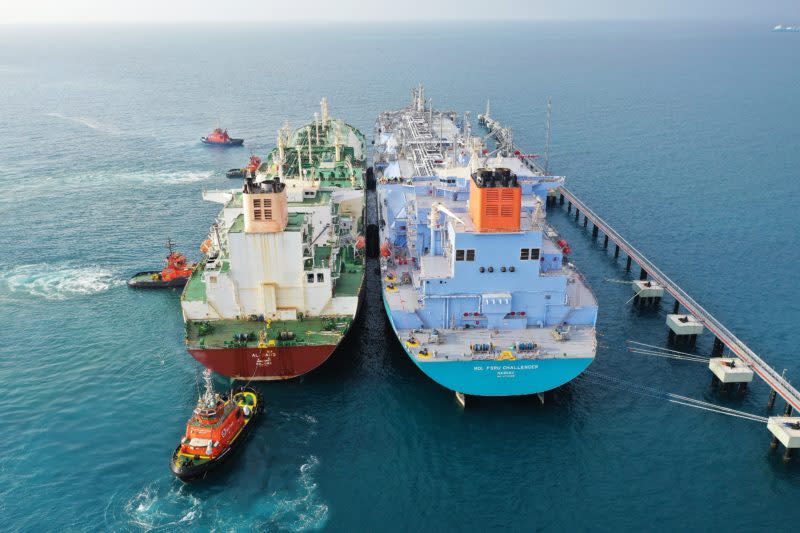 Since the Russian attack on Ukraine, the security of Germany’s gas supply has been in jeopardy. The moral dilemma also poses a real challenge for the federal government. After all, economic sanctions can only reach a limited amount if money is still flowing into the war chest in the Kremlin as a result of German demand for energy. But how does Germany manage to get out of this fateful dependency?

The answer to the question is said to be liquefied gas, the so-called Liquefied Natural Gas (LNG). LNG is high-pressure refrigerated liquefied natural gas that is shipped to European ports by tanker truck and is considered an alternative to pipeline gas. According to the EU Commission, the EU has so far sourced almost half of its conventional natural gas needs from Russia and only about 25 percent of LNG imports. Until now, Germany itself has been getting about 55 percent of its gas from Russia through pipelines. This should soon come to an end.

How do FSRUs work?

The tide is now about to turn with floating LNG terminals, also known as floating storage and regasification units (FSRUs). According to Lower Saxony’s Energy Minister Olaf Lies (SPD), the import of liquefied natural gas into Wilhelmshaven via FSRU could be successful before winter 2023. According to Economics Minister Robert Habeck (Greens), they are discussing more locations. “The federal government is currently examining potential locations in the North Sea and Baltic Sea where they can be used at short notice, in some cases as early as winter 2022/23,” the ministry wrote. Habeck officials have already “opted out” three floating liquefied gas terminals through energy companies RWE and Uniper.

To understand how floating LNG ships work, you first need to take a closer look at LNG. The natural gas, which consists of a mixture of methane, hydrocarbons, nitrogen, carbon dioxide, water, and toxic components such as sulfur compounds, is first fed to a liquefaction plant. After removing unwanted components, the methane content is 98 percent; not in vain, it is considered one of the purest gases in the world.

The gas must be cooled in several steps so that it becomes completely liquid. When cooled to -160 degrees Celsius, it is transported, usually by ship, to the desired destination. However, it must be heated to its original gaseous state. This superheating must occur before the gas is pumped to storage systems on land. The entire process of freezing and then reheating the fuel is usually very expensive and time consuming.

Instead, a cheaper and faster alternative will be offered by a floating storage unit with a reliquefaction system: the Floating Storage Regasification Units. On the one hand, they function as LNG storage facilities and, on the other hand, as regasification systems that can convert liquid fuel back into gas off the coast. In concrete terms, this means that no LNG terminals are required for offloading, of which there are currently only 37 in Europe and none in Germany, but a deepwater port is sufficient. According to “Marine Insight”, the following four components make up FSRU:

tanks: Membrane or spherical tanks are used to store the LNG.

Regasification unit: It is intended to convert liquefied natural gas (LNG), which is transported at a temperature of -160 degrees Celsius, back into natural gas.

LNG discharge hoses: The vessel carrying the LNG cargo discharges the gas with a discharge arm connected to the FSRU or with the help of cooling hoses.

heating medium: To vaporize LNG, seawater is often used as a heat source at terminals where ships dock. Strict environmental standards must be met for cold seawater that is discharged after heat exchange with LNG.

The special ships are new builds or converted from older LNG tankers and are ready for use within a few months. Furthermore, many of these ships already exist and would just have to be brought to the appropriate ports. A big advantage over land import terminals, which take several years to build and are significantly more expensive. In the last ten years, these boats have been used over and over again. Annual production is around five billion cubic meters of gas per ship. It’s no wonder, then, that interest in leasing such FSRU equipment has spiked in Europe in light of the war in Ukraine, as reported by Bloomberg.

Independence of Russian gas by 2024

Habeck is optimistic about Germany’s gas supply. Reliance on natural gas is now only “40 percent” instead of 55 percent previously. Much of the 46 billion cubic meters of gas that Germany receives each year from Russia has already been replaced by LNG deliveries. With the floating terminals, Germany could obtain 7.5 billion cubic meters of gas from other regions of the world as soon as next winter.

“Russian gas independence can largely be achieved in a joint effort by the summer of 2024,” the Ministry of Economic Affairs said. However, such a forecast also presupposes the massive expansion of renewable energy. If all goes according to plan, by the summer of 2024 only ten percent of the natural gas used in Germany could come from Russia.