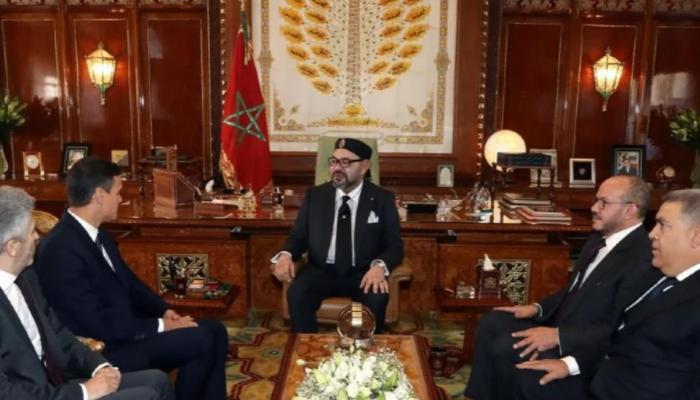 For the first time in its history, Spain, the Kingdom’s northern neighbor, expresses its explicit and direct support for the Moroccan initiative to resolve the artificial conflict in the Sahara, which is represented in autonomy under Moroccan national sovereignty.

Spain, through a letter sent by its President of the Government, Pedro Sánchez, to Moroccan King Mohammed VI, yesterday, Friday, expressed its recognition that the Moroccan initiative to resolve the Sahara conflict is the most serious, realistic and credible.

The letter included an acknowledgment by the Kingdom’s northern neighbor that “the Moroccan initiative for autonomy serves as the most serious, realistic and credible basis for resolving the dispute” related to the Moroccan Sahara.

For its part, the Moroccan Ministry of Foreign Affairs, in a statement received by Al-Ain News, values ​​the positive positions and constructive commitments of Spain regarding the question of the Moroccan Sahara.

The great and clear turn of the Spanish position towards the file of the Moroccan Sahara is considered a great diplomatic victory, according to Hassan Balouan, academic and expert in international relations.

Balouane told Al-Ain Al-Akhbar that Spain, which soon agreed to receive the Polisario leader on its soil under a false identity, issued a position like this, which is an unprecedented violation of Moroccan diplomacy.

He continued: “We discovered that the wise and careful diplomacy of Moroccan King Mohammed VI, characterized by a strategic vision that foresaw the future with a realistic smile, was able to achieve a gain that adds up to many gains, in addition to which is the explicit American recognition of the Moroccan Sahara, as well as the diplomatic impulse at the level of the Moroccan Sahara”.

It is not necessary to speak of the Spanish position in isolation from its German counterpart, who emphasized the same and highlighted the importance and effectiveness of the Moroccan proposal to put an end to this artificial conflict in the region for several years.

In this context, Balwan said: “The observer of the Moroccan Sahara file points out that the Kingdom is receiving more and more positive support from countries that until recently showed explicit and direct support for the separatist theses.”

All these developments, and if we add to them the great support that Morocco obtained almost two years ago in the context of the security of commercial and civil traffic in the Guerguerat pass, after the Polisario militias attacked the pass and suspended the circulation for weeks, reflect an unprecedented international awareness of the effectiveness of the Moroccan proposal and its realism in resolving this conflict.

Regarding the implications of this historic turning point in the Spanish position, and its repercussions on the file, Balouane speaks of two main points.

The spokesman clarified that the Polisario Front, and those who are in its orbit, today face a clear reality, and that is that the proposal to establish a “false republic” no longer exists except in their dreams and imaginations.

And he continued: “This separatist proposal is no longer feasible, which is why Spain today has hammered the final nail into the coffin of this proposal, that international positions have proven to be ineffective”, and added: “How is it possible to differentiate between the people from the same nation? Are we only doing this because dozens of people are supported by foreign countries that want to divide the country?

The second message, according to Bloun, is that “the Moroccan proposal for autonomy under national sovereignty has proven its effectiveness, which has already begun in one way or another through the expanded regionalization system applied throughout the country, which grants local officials, democratically elected, the highest powers in the management of local affairs.

“Just look at the cities of Dakhla and Al-Ayoun, and count the development projects that have radically transformed the region and raised the well-being of citizens in very record time,” he said.

The international relations expert concluded that this Spanish position will have consequences, since it will encourage many other countries to express their explicit support for the Moroccan proposal, due to its great effectiveness.