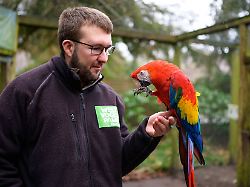 The winter holidays in the Weltvogelpark Walsrode are coming to an end, the approximately 4,000 birds can be visited again at the weekend. For the 60th birthday in June there is a new aviary.

Walsrode (dpa/lni) – After a winter break of four and a half months, the Weltvogelpark Walsrode will open its doors on Saturday. One of the new residents of the park is the bird of the year 2022, the hoopoe, chosen by the Union for Conservation of Nature. The regionally endangered hoopoe is a native migratory bird and likes to inhabit sunny meadows, pastures, orchards, and vineyards. It feeds on insects whose population has decreased due to the loss of large grazing areas and the use of pesticides. Its unpleasant odor is also characteristic.

In the parrot enclosure you can see the green parrots, widespread in South America to Tierra del Fuego, along with the Cuban Amazons, native to the Caribbean. The hornbill family also welcomes a new member: African white-crested hornbills originally inhabit the tropical rainforests south of the Sahara and, like all hornbills, nest in caves.

Bilbo the sloth who moved in April 2021 will have a mate in the spring. For the 60th anniversary, a walk-in aviary will open at the entrance in June.

There has been no major hurricane damage to the sprawling site in recent weeks. “It was challenging, but not too bad. Luckily, we had the tree felling a week before the big storm,” reports Janina Ehrhardt, a spokeswoman for the park. Due to hibernation, most of the animals stayed indoors. “One fears, but we got over it pretty well.”

Due to the spaciousness of the outdoor area, the number of visitors stabilized in the summer after a restricted spring 2021 due to the corona pandemic. For this season, which lasts until November 6, the park expects a return to normality.