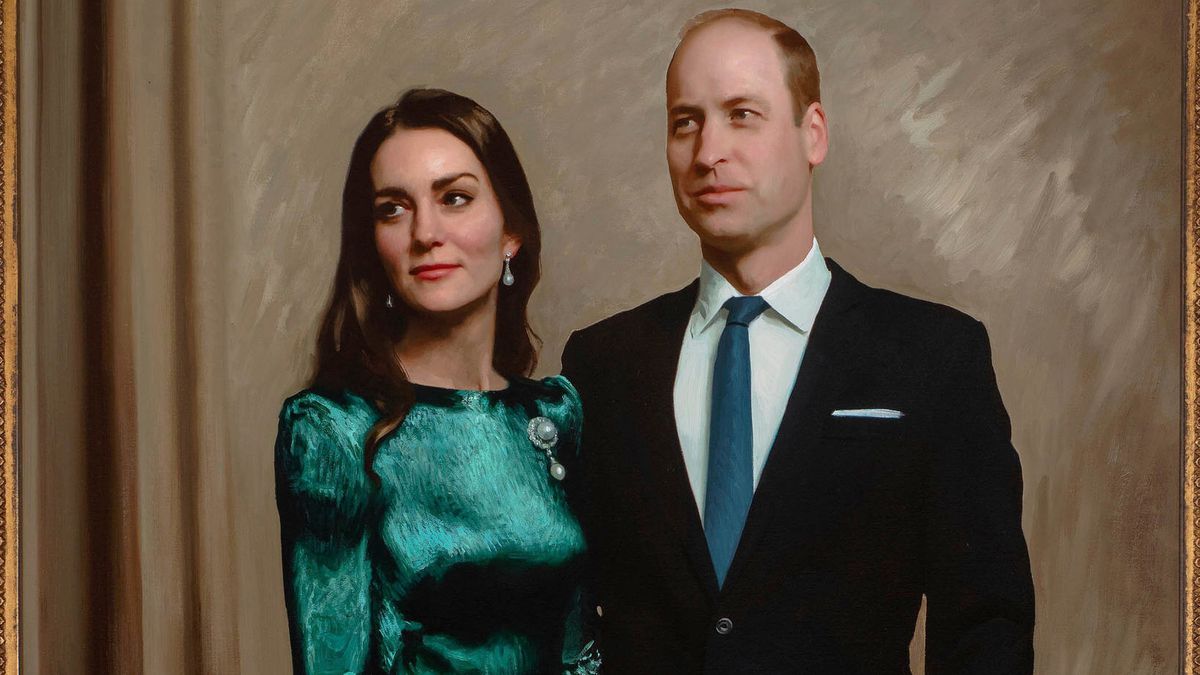 Holding each other by the hips, with half-smiles on their faces and looking at a vague point that eludes the viewer’s view. So Prince William and his wife Kate Middleton, Duke and Duchess of Cambridge, have decided to present themselves to the world in their first official portrait. The painting is the work of British hyper-realist painter Jamie Coreth, who has stated that commissioning this portrait was the greatest privilege of his life.

“I wanted to show Their Royal Highnesses relaxed and close, but also elegant and dignified,” says the artist, “because this is the first portrait of them together, and it’s from their time as Duke and Duchess of.” Cambridge, wanted the image to evoke a sense of balance between their public and private lives.” Commissioned by the Royal Cambridgeshire Portrait Fund as a gift to the county in 2021, the artist has celebrated the county through the brush by painting has painted the shadows of his historical buildings in the background of the portrait.

While Prince William dresses soberly (dark suit, blue tie, no jewelry or recognizable or conspicuous clothing), various specialized fashion media have highlighted Kate Middleton’s risky wardrobe choices for this first official portrait. The Duchess wears her emerald green The Vampire’s Wife dress by designer Susie Cave, wife of musician Nick Cave, which she wore to a visit to the Guinness Store in Dublin in 2020. Although it is common to see Kate Middleton betting on national talent, in his recent appearances he has opted for the sobriety of companies such as Eponine, Catherine Walker or Boden, while for the portrait he has chosen to pose for posterity in a dress, worn by celebrities like Alexa Chung or Sienna Miller.

Not only his clothes, but also his shoes have attracted attention. On her feet, Kate wears one of the most iconic shoes by the famous designer Manolo Blahnik, the Hangisi model with heels that became popular as the protagonist of the TV series Sex in New York, Carrie Bradshaw (played by Sarah Jessica Parker), chose her for her wedding anniversary. Although the Duchess sometimes wears shoes by the Canarian designer, it’s unusual for her to wear such a recognizable and medial model.

In the portrait, the Duchess also wears a brooch, which is a nod to both her title, that of the Duchess of Cambridge (which William and she were awarded at their wedding in April 2011) and also Queen Elizabeth II. For on the left breast, on the dress, she wears for the first time a brooch with a large pearl of the monarch. It is called the Duchess of Cambridge’s Pendant Pearl Brooch, with a large pearl surrounded by diamonds from which another smaller one hangs. It is common to see Elizabeth II wearing it in portraits, speeches and acts, but until now Middleton had not worn it. It is a Garrard jewel created in the 19th century and named after a previous duchess before Kate.

Prince William and Kate Middleton first saw the play on the morning of June 23 during a visit to the region. The portrait will be open to the public for three years at the prestigious University of Cambridge. The work is on loan to the National Portrait Gallery for reopening in 2023.