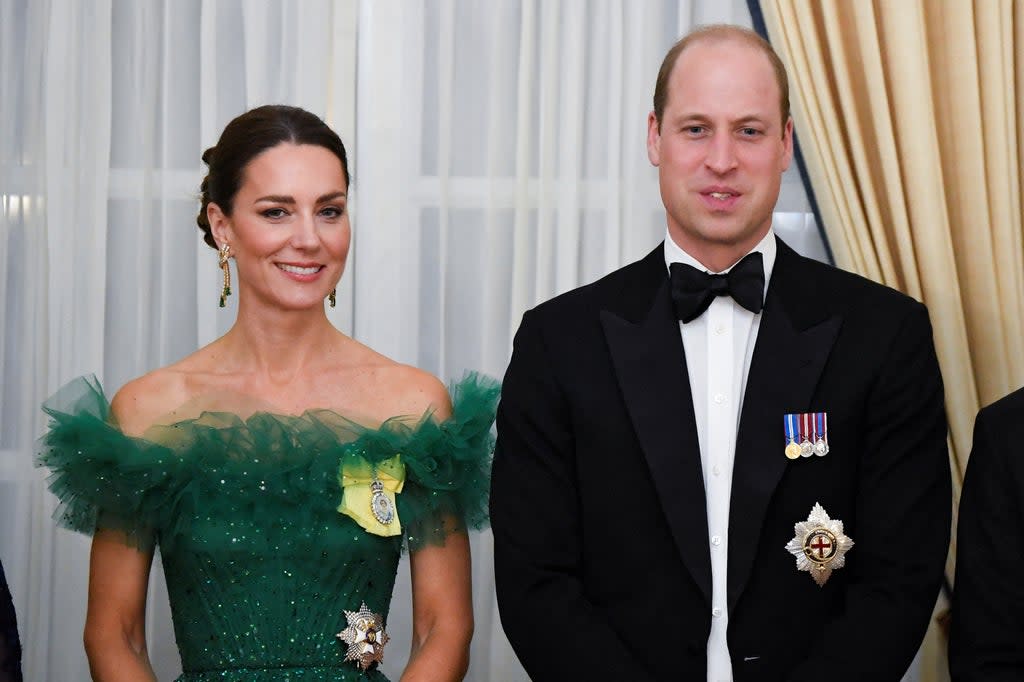 The Duke of Cambridge denounced slavery as “abhorrent” and said it “should never have happened” as he addressed the issue after days of protests demanding reparations from the royal family.

William expressed his “deep sorrow” at the forced transportation of millions of people from Africa to the Caribbean and North America, a trade that British monarchs supported or profited from during the 17th and 18th centuries.

The Cambridges’ tour of Belize, Jamaica and the upcoming final leg in the Bahamas has sparked protests and statements calling for an apology from the royal family. The future king did not ask for forgiveness, just as his father Charles had not done so during his trip to witness the conversion of Barbados into a republic.

But he praised the Windrush generation of Caribbean people who came to the UK a few years after World War II to help rebuild the nation decimated by six years of conflict.

Jamaican Prime Minister Andrew Holness appeared to suggest that his country could be the next country to secede from the monarchy, telling the Cambridges that he was “moving forward” and that he intended to “fulfill our true ambitions and destiny as an independent, developed and prosperous country”. .

The Independent has reported that the Jamaican government has already begun the process of transitioning to a republic, with an official appointed to oversee the work.

Speaking at a dinner hosted by the Queen’s representative to Jamaica, Governor General Sir Patrick Linton Allen, the Duke said: “Anniversaries are also a time for reflection, particularly this week with the International Day of Remembrance for the Victims of Slavery and the Transatlantic Slave. trade.”

Commenting on the sentiment expressed by Charles when he attended the ceremony that saw Barbados become a republic in November, he said: “I fully agree with my father, the Prince of Wales, who said in Barbados last year that the terrible atrocity of slavery forever stains our history.”

“I want to express my deep sorrow. Slavery was abominable.

“And it never should have happened.

“While the pain is deep, Jamaica continues to forge its future with determination, courage and strength.

“The strength and sense of shared purpose of the Jamaican people, represented in their flag and motto, celebrate an invincible spirit.

“It is this same spirit that animated the Windrush generation, who came to the UK to help rebuild after the Second World War.

“We will be forever grateful for the immense contribution this generation and their descendants have made to British life, which continues to enrich and improve our society.”

Elizabeth I was involved with one of Britain’s earliest slave traders, John Hawkins, while Charles II encouraged the expansion of the industry and with his brother, the Duke of York, later James II, invested their private funds in the Royal African Company, which transported Africans. across the Atlantic.

As slavery abolitionists campaigned, they were opposed by the Duke of Clarence, the son of George III, later to become William IV.

Royalty and the rest of the pro-slavery lobby would eventually lose the battle when William Wilberforce and other abolitionists succeeded in passing the bill banning the slave trade in 1807.

William delivered his speech on Wednesday and, for the second day, the Cambridges’ presence in Jamaica sparked protests, with around a dozen members of Jamaica’s Rastafarian community demanding reparations from the royal family as the couple visited a military event near Montego Bay.

Ras Iyah V, a leading member of Jamaica’s Rastafari Nyahbinghi community, said: “We are here to protest against any British descended monarchy coming to Jamaica unprepared to apologize for slavery and colonialism.

“We can only forgive people who recognize that what they did was wrong and are willing to make amends for the mistakes they have made.”

He added: “And today, the British monarchy has many African artifacts in its possession – they are still bathed in the wealth that was drawn from the blood, sweat, tears and lives of our people and we have never been compensated in any way. shape. of slavery.”

During his speech at the black-tie event, William affectionately paid tribute to the Queen, whose Platinum Jubilee is marked by the Cambridge Caribbean tour: “She may be my real grandmother, but everyone counts her as their grandmother too.”

“Their experiences are a reminder of the terrible loss and inequality of war and conflict around the world, which we must never forget.”

Kate was dressed in a green dress by British designer Jenny Packham paired with earrings and a bracelet that were on loan from the Queen and wore the Order of the Royal Family and her Dame Grand Cross of the Royal Victorian Order star.

Later Thursday, the couple will bid farewell to Jamaica after attending the inaugural commissioning parade for service personnel who have completed the Caribbean Military Academy’s officer training program, then fly to the Bahamas, where they will be received by Prime Minister Philip Davis.

- Advertisement -
Share
Facebook
Twitter
Pinterest
WhatsApp
Previous articleEgypt and Senegal.. What did Salah and Mane offer on the way to the World Cup?
Next articleThe Guelfs argue about the fairy-tale castle: the process begins