Will Trea Turner get an extension? Who is the closest? 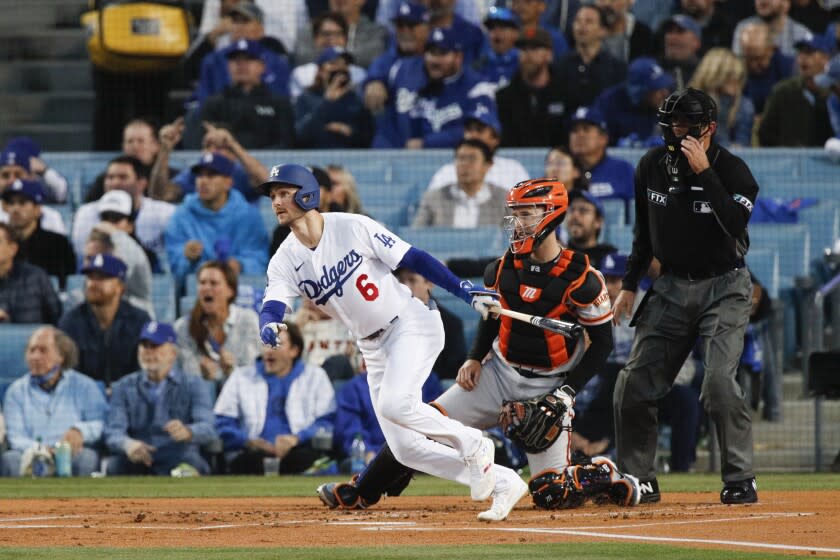 While the Dodgers’ search for Freddie Freeman continues to generate speculation, the team also opened its spring training camp over the weekend and held its first official workout on Monday.

A number of subplots and stories are already beginning to develop. As spring progresses, here are five things to watch in the lead up to the 2022 season:

Trea Turner is back in his natural position at shortstop. The question now: Will he also be the team’s shortstop in the future?

Turner, who was acquired at the trade deadline last year, is in the final year of his contract. And while he would be willing to stay with the Dodgers long-term, he said there has been “nothing substantive” yet in talks about a possible extension.

“I feel like I share,” said Turner, an All-Star last season who would be one of the top free agents available next winter. “I can talk if anybody wants to talk. If not, I’m ready to play and ready to go.”

Turner added: “I think this organization, like I said from day one, is amazing. My time here has been so much fun. And I think it’s definitely a place I can be in the long term. Whether or not that happens is another question, but I had a lot of fun.”

Manager Dave Roberts didn’t completely close the door on the Dodgers by re-signing free-agent closer Kenley Jansen, but it seems more likely every day that the team doesn’t have the veteran right-hander in the back of its bullpen.

That means the team will have to pick a replacement or, as Roberts hinted Monday, take a closer committee approach.

Roberts acknowledged that right-hander Blake Treinen would be the favorite, but also said the team likes his versatile setup/firefighter role in which he takes on the heart of the opposing order whenever it comes up.

“Blake is willing to do whatever he can to help us win and that’s the most important thing,” Roberts said. “But I love our pen. I think it’s a strength right now.”

One of the biggest impacts of the layoff will likely fall on starting pitchers, who are trying to stretch out in a significantly shorter spring training camp.

“I think our biggest concern is the early [in the year]”, said the president of baseball operations, Andrew Friedman. “So it’s just how to navigate that and where our own guys are and I think as we assess that, over the next couple of days, we’ll have an even better sense.”

The Dodgers are monitoring several players trying to recover from injury this camp.

Clayton Kershaw is the biggest name. After battling an elbow injury last year, he’s hopeful he’ll be ready for opening day and was buoyed up after facing live batsmen for the first time on Monday.

Relievers Caleb Ferguson and Tommy Kahnle, both returning from Tommy John surgeries in late 2020, are more of a question mark, and Roberts says he thinks he’s currently “unlikely” for opening day. Starter Dustin May is also rehabbing after undergoing Tommy John surgery last year and said he aims to return for the final third of the season.

Among position players, Mookie Betts (who battled a hip problem last year) and Edwin Rios (who had a shoulder injury) are complete, but Roberts said the team would be careful how they increase.

While the Dodgers’ top-of-the-line depth chart seems all but settled, barring the addition of another big free-agent signing like Freeman, the team will still have several roster spots up for grabs.

On the bench, the likes of Gavin Lux, Matt Beaty, new signing Hanser Alberto and Rios will compete for playing time, while off-roster guests including Eddy Alvarez, Andy Burns, Jason Martin, Stefen Romero and Jake Lamb , they will also try to be part of the team. .

The bullpen could have a few more roster battles. Left-hander Victor Gonzalez showed up to camp in impressive form after finishing last year in the minors. Ferguson and Kahnle, as long as they are healthy, will try to consolidate themselves on the Major League roster. Seven of the eight pitchers invited off the Dodgers’ roster also have previous major league experience, with the sole exception of highly touted prospect Ryan Pepiot.

- Advertisement -
Share
Facebook
Twitter
Pinterest
WhatsApp
Previous articleThis is Marina Ovsyannikova, the woman who spoke out against Putin’s war on Russian television, and is now on trial.
Next articleWarning about the use of Kaspersky antivirus