Will the Bundeswehr also soon use the crisis alert system of this new Franconian company? 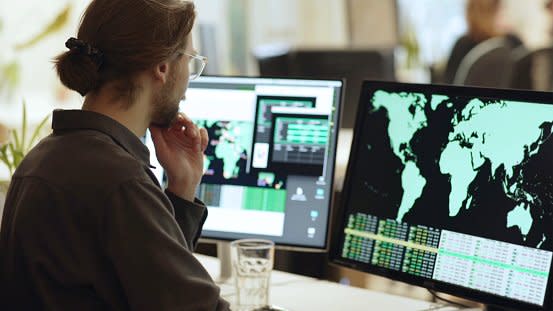 Crises such as pandemics, floods or wars have one thing in common: the situation on the ground is often confusing, especially at the beginning. The time factor plays an important role in crises, for example to get people to a safe place in time, says Traversals founder Dirk Kolb in an interview with Gründerszene.

However, in order to initiate adequate relief measures, reliable information is needed, which is sometimes not readily available. Because in times of crisis, manually verifying mobile phone videos or Twitter messages can be time consuming and delay important decisions. Isn’t that faster too?

Yes, says Kolb, founder of the startup Traversal from Uttenreuth in Franconia. The engineer’s software is designed to use artificial intelligence to collect, analyze and evaluate hundreds of thousands of entries from freely available sources like Google and Twitter, but also from global media reports. In this way, the laborious investigation for the evaluation of the situation reports could be eliminated, in order to be able to decide more quickly on the next steps. But who needs something like that?

The Bundeswehr for example. The Bundeswehr Cyber ​​Innovation Center tested the startup’s crisis alert system for a year to “relieve soldiers from routine tasks and increase the responsiveness of the operations center in the event of sudden and acute crises,” according to an official report.

The cooperation with the Cyber ​​​​Innovation Hub of the Bundeswehr is lucrative: the unit’s budget is around 10 million euros. This money is used to invest in startups like Traversals, which make it easier for troops to work with their solutions. The one-year trial phase ended in January this year. The Cyber ​​​​Innovation Hub is now checking if you want to continue using the software.

Startups don’t always have it easy in the public sector

It remains to be seen whether the software, which the Bundeswehr has dubbed “Prometheus AI”, will also prevail in the next step, namely in the Bundeswehr’s acquisition process. And that’s what gives Kolb a headache. Because the process of acquiring the Bundeswehr can take between one and three years. For Kolb, this means he has to wait until a deal is made between his company and the Bundeswehr, and the money flows into his coffers.

Criticism of the federal procurement system has increased particularly in the wake of the war in Ukraine. According to media reports, the procurement of military technology and equipment for soldiers has been repeatedly delayed in recent years. This is now getting its revenge: military experts report that the Bundeswehr is not ready to act in an emergency. According to her own statements, SPD Defense Minister Christine Lambrecht is striving to make acquisitions more flexible.

From a family business to your own startup

Kolb is sure faster processes would encourage more startups to do business with the state. The 38-year-old founded the company Traversals in January 2019 and now has eleven employees. After studying computer science at the Friedrich-Alexander University in Erlangen-Nuremberg, he first joined his father’s IT company. This was bought in 2012 for a double-digit million amount by the Swedish arms group Saab. He worked there for six years as a project manager and, by his own admission, represented the company on foreign trips around the world. But then he wanted to start something new and set up his own business.

In the summer of 2020 he launched the Traversals software. Since then, his company has been financed out of current income, but has not yet covered its costs. According to the founder, the company generated sales of half a million euros last year.

Airbus and Fraunhofer as customers

Traversals has about five clients, according to Kolb. These are not many, but very well known. Among other things, the startup has collaborated on a project with the Fraunhofer Institute for Communication, Information Processing and Ergonomics (FKIE) in Bonn.

But the world’s largest aircraft maker, Airbus, also uses the Bavarian startup’s software to create competitive analyses, as Traversals founder Kolb explains. This means that the software searches the Internet for global headlines and competing projects.

In addition, the program has other features. Among other things, the spread of infectious diseases can be specifically observed. However, companies should also be able to use the software to verify entire supply chains passing through third countries like Taiwan or Bangladesh, for example. Because from 2023 the so-called Law of Due Diligence in the Supply Chain will come into force. From then on, companies can be held liable if human rights are violated in their supply chains.

To verify this, the software can search the web for information, for example about a production plant located abroad. Because strikes or citizen petitions on site can indicate problems that could also affect employees in a production plant.

The data handled by Traversals is confidential. The startup announces that the work is strictly GDPR compliant. The price of a monthly license is based on the frequency of use of the program, that is, the frequency with which a company is informed about the situation on the site. The cheapest offer is around 400 euros per month. Billing is done through so-called credits, which companies buy from the startup. Each search that is performed costs credits to customers. The more the software is used, the more companies will have to pay.

The income is still not enough to offset the start-up expenses. In order to cover its costs, the new Franconian company needs even more customers, or money from investors. And the founder is already speaking to them. Because until an agreement is reached with the Bundeswehr, it will probably take a while. However, as a new business, you don’t always have that much time.