Will the “Bright Star” meet Ukraine’s expectations of Israel? 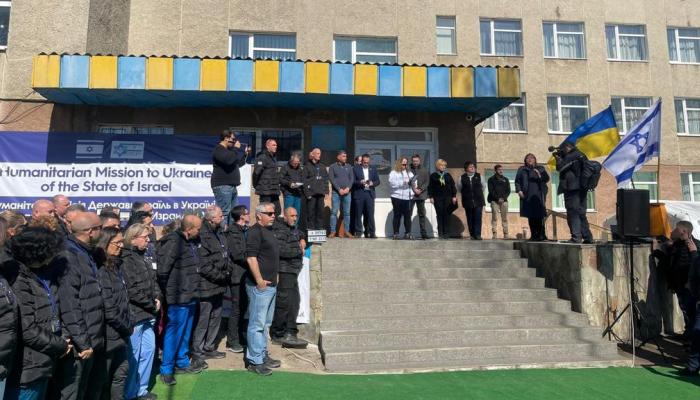 Israel is trying to please Ukraine through humanitarian aid, after its decision to refuse to supply it with weapons despite criticism.

Israel stands on a fine line between Russia, which it needs for strategic purposes, and Ukraine, which says it sympathizes with its people and supports the Western world.

But, so far, the Israeli political decision is to refrain from providing weapons to Ukraine, including the Iron Dome anti-missile system.

On Tuesday, the Israeli Foreign Ministry announced the opening of a field hospital in Ukraine, which it called “Bright Star.”

In a statement received by Al-Ain Al-Akhbar, the Israeli Foreign Ministry said: “The opening ceremony of the Bright Star Field Hospital was held in the city of Mostiska in western Ukraine.”

He indicated that “the ceremony was attended by representatives of the Ukrainian government, including: the Deputy Minister of Health, the Governor of Lviv and the Mayor of Mostiska, while on the Israeli side, the Chargé d’Affaires of the Embassy of Israel in Ukraine attended. the head of the delegation, the director of the hospital”.

She said: “The Bright Star Hospital was established by the Israeli Ministry of Foreign Affairs, the Ministry of Health and the Sheba Medical Center with the help of the entire Israeli health system and with the support of the Schusterman Foundation, which donates to national and social projects. In Israel.”

As for Professor David Dagan, head of the Health Ministry delegation, he addressed the members of the Israeli medical delegation and said: “We are here to be the star that lights the way for refugees who need medical care.” lend them a helping hand.”

Dr. Yoel Har-Even, from Sheba Medical Center and director of Bright Star Hospital, said: “The mission of this hospital is to make it clear to the Ukrainian people that they are not alone.”

The Israeli and Ukrainian flags were raised over the field hospital.

In response, the Ukrainian embassy in Tel Aviv said: “We express our gratitude to the Government of Israel and the Ministries of Foreign Affairs and Health for supporting and organizing this humanitarian initiative that will undoubtedly help Ukrainians suffering from Russian armed aggression.” .

He noted that the name of the hospital is derived from the name of Israel’s first female Prime Minister, Golda Meir, who was born in Ukraine.

And Israel had previously provided humanitarian aid to Ukraine with its announcement of receiving Ukrainian refugees, especially Jews.

But in a speech to Knesset members on Sunday, Ukrainian President Volodymyr Zelensky said: “Why didn’t Israel put direct pressure on Russia’s business interests? You have to give the answers and then live with these answers. 80 years ago years we saved the Jews and therefore there among us there are supporters of the people. The Jew. Now you also have the right to choose in Israel”.

The Ukrainian president praised the Iron Dome as the best missile defense system in the world and complained that Israel does not supply Ukraine with defensive weapons.

He said: “We turn to you and ask if it is better to assist or mediate without choosing a side, I leave the answer to you, but I want to point out that indifference kills.”

But Israel avoids antagonizing Russia, which wields heavy weight in Syria and influences international negotiations with Iran over its nuclear program.

“We are handling this unfortunate crisis in a sensitive, benevolent and responsible manner, while balancing various considerations, which are complex,” Bennett said Monday at a conference organized by the Israeli website Ynet provided by Israel to Ukraine.

Israeli analyst Anshel Baber said, in an article in the Haaretz newspaper, followed by Al-Ain News, that: “There was no clear difference in the intensity of Zelensky’s criticism of Israel, Britain and the United States, but according to his criticism to the Israeli government’s policy, a tone of disappointment also filtered in. Israel a little more, because of the history of the two peoples that it misrepresented a little when it tried to present the Ukrainians as the ones who saved the Jews in the period of the disaster”.

He added: “Zelensky’s deep disappointment is that the government of Israel does not provide him with weapons and does not add to the sanctions imposed on Russia.”

In turn, Sima Kadmon wrote in an article in the Yedioth Ahronoth newspaper and said: “What you expect from us is military assistance. Weapons. Iron Dome. Major sanctions against Russia. Ukraine called on Israel to take a stand and choose a side.”