Will Barcelona resort to a royal spell to end the European flop?

Barcelona will play a fateful match against its host Galatasaray in the second leg of the 16th round of the Europa League, on Thursday.

The first leg at the ‘Camp Nou’ stadium, Barcelona’s stronghold, ended in a goalless draw last week, which means that the Catalan team needs to win at their rival’s ground to snatch the ticket to the quarter-finals.

Since their last Champions League crown in 2015, Barcelona have suffered one Champions League failure after another, cemented by their failure to qualify for the playoffs despite comfortable first-leg superiority.

In the 2017-2018 edition of the European Champions League, Barcelona defeated Roma (4-1) in the first leg of the quarterfinals, but was eliminated by the legal goal rule, after their sudden defeat (0 -3) on the second leg

In the following season, Barcelona defeated Liverpool (3-0) in the first leg of the semi-finals, but lost again (0-4).

In the 2019-2020 season, Barcelona suffered a humiliating defeat against Bayern Munich (2-8) in the quarterfinals, then lost (2-5) against Paris Saint-Germain in the total of the two games for the final price in the following season, before bidding farewell to the championship this season from the Group stage, after finishing third to move on to the European League.

Barcelona started its career in the previous edition of the Copa del Rey (2020-2021) in an alarming way, and was on the brink of exit more than once at the hands of teams inferior to it in level.

Barcelona began their run that season by facing third-tier outfit Cornellá in the round of 32, with the original time ending in a goalless draw, after Barça missed two penalties.

Barcelona achieved a difficult victory with a clean double in extra time, scored by Ousmane Dembele and Martin Braithwaite, to collect the ticket for the final prize, in which they faced Rayo Vallecano, and were already a contender for the second division.

In a more complex scenario, Vallecano took the lead in the 63rd minute of the final prize game, but Barcelona revived their hopes and scored twice through Lionel Messi and Frenkie de Jong to reach the quarter-finals.

Barcelona played a more exciting match against Granada in the quarterfinals, where they were delayed by two goals until the 88th minute, before Antoine Griezmann and Jordi Alba scored for them, so the two teams played extra time, which they won Barca 5-3.

In the semifinals, Barcelona made an appointment with Sevilla, and Barça lost 0-2 in the first leg in Andalusia, to seem close to leaving, but got up in the second leg and won 3-0 to snatch the transit card from him. final match

The final was the only victory for Barcelona without complicated scenarios, as they beat Athletic Bilbao unanswered to achieve their 31st title in the tournament and move away from the most crowned title.

It seems that Barcelona are going the same way in the Europa League this season, as they faced Napoli in the round of 16 play-off, and the game ended in a draw (1-1) in Spain before Barça got a wide victory away from home (4-2) to snatch the transit token for the Final prize.

Barcelona fell into the trap of a goalless draw with their wild card Galatasaray in the first leg of the round of 16, and their fans await the second leg in Turkey and qualification for the quarter-finals to continue their path to crowning the title. 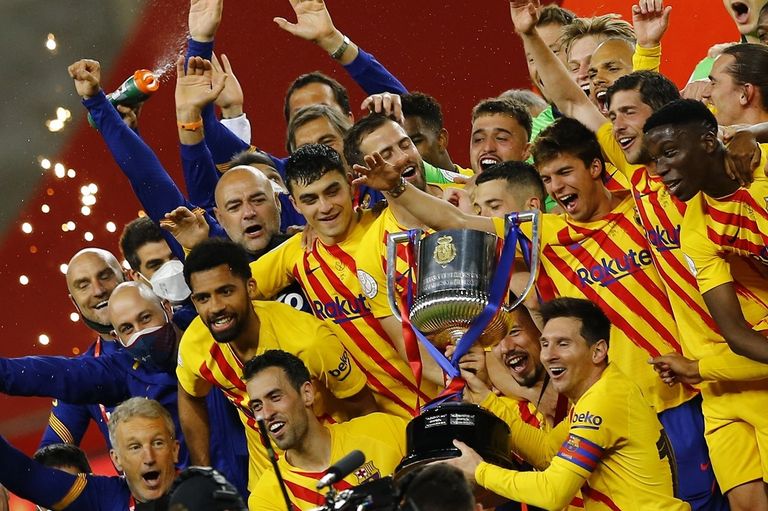