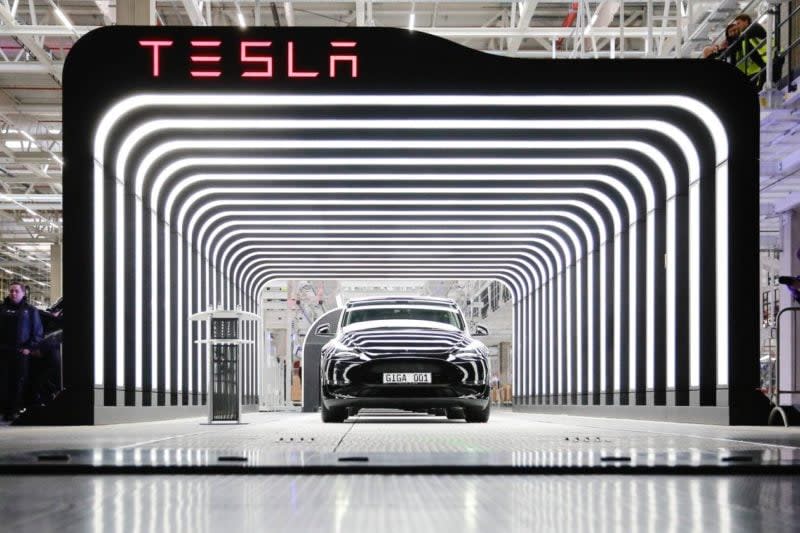 Tesla boss Elon Musk can breathe a sigh of relief. Just a few years ago, his company was on the verge of bankruptcy, but now the electric carmaker reports record profits every quarter. Musk’s expansion strategy is working: After the Gigafactory opened in China amid the coronavirus pandemic, Tesla vehicles have also been rolling off the assembly line in Germany since last week.

The factory in Grünheide will primarily serve the Arab and EU markets. According to the company, up to 500,000 vehicles can be produced per year. After Tesla sold around 936,000 worldwide last year, the 1.5 million electric car mark will soon be reached. For comparison: Audi recently sold 1.6 million vehicles.

One model accounts for 80 percent of sales

Slowly but surely, Tesla is entering the territory of the German automakers, which is causing them more and more headaches. Because with the mid-range Model 3 (from 42,000 euros), Musk is entering a segment that yields higher margins. Manufacturers earn less with small cars or vehicles below the Golf range than with those costing between 40,000 and 60,000 euros. At the same time, the Model 3 is responsible for more than 80 percent of Tesla’s total sales. How long does this reliance on a model serve the company well?

There will be no talk of market saturation for a long time. After all, in Germany alone around 44 million vehicles have yet to be converted to electric drive. At the same time, the Model 3 serves a comparatively small target group: high-income people interested in new technologies, who also have to like the Spartan interior. But there aren’t enough long-term buyers of these, so it begs the question of what Tesla’s next steps will be.

Elon Musk has already announced two new vehicles. The truck-like Cybertruck and a new roadster, the supercar. Both vehicles will undoubtedly sell well, but prices are likely to be high and the customer base is also likely to be limited. As futuristic as the Cybertruck is, it is not a vehicle for the mass market. In addition to that, it is not yet clear whether the vehicle, which weighs up to 6.5 tons, can be registered in Europe.

Elon Musk must now decide in which direction he wants to develop Tesla. In principle, he has two options: he can continue with the previous strategy and occupy the premium segment. However, this would require a wider range of models. In addition to the mid-range Model Y SUV, it could be a station wagon, for example. This variant should primarily appeal to European buyers. In addition, another vehicle is missing in the luxury class. Here, the German manufacturers have clearly presented. Although the sales figures in this segment are low, the margins are very high.

The other option for Musk would be to offer a vehicle in the Golf class. Here, however, Tesla faces the aforementioned problem of razor-thin profit margins. There are no exact figures for how high they are for different manufacturers. However, industry insiders assume that a combustion engine in the highly competitive Golf class produces a profit of around three to four percent. This then has to be used to finance the development and manufacture of the vehicle.

Volkswagen, for example, finances the ID.3 in part through its platform strategy. The interior in particular is largely the same as the Golf, which saves a lot of money. A comparable model from Tesla would have to use Model 3 components for the most part. In terms of technology and interior, this is certainly not a problem. However, Elon Musk is reluctant to enter the segment. Not only because the margins are lower, but also because for the first time in the company’s history he would have to spend money on marketing to find enough buyers.

There will be no Tesla small car

In addition, electric drives are still too expensive. In particular, current battery prices make it nearly impossible to offer a long-range car in the €20,000 range. At the same time, the battery market is extremely tight. Metallic nickel in particular causes problems. Russia is the largest exporter of the metal, which is why prices have soared recently. This makes battery production even more expensive and makes a Golf-type Tesla even less attractive.

Therefore, there is currently little reason for Elon Musk to enter this market. It only remains to expand the range of models for vehicles between 50,000 and 200,000 euros. The Tesla Model S in particular, which received a major update last year, could help here. However, the vehicle is only available in the US so far and only in small numbers there. If that changes, Tesla could arguably add to its profits quickly. Tesla still has a technological advantage when it comes to electric drives and, above all, integrated infotainment systems.

But this advantage will not last forever. Especially since German automakers are increasingly allying themselves with tech companies that supply software and hardware that is equal to, if not superior to, Tesla’s. So Elon Musk must not hesitate now. He has to deliver quickly.

Don Dahlmann has been a journalist for over 25 years and has been in the automotive industry for over ten years. Every Monday you can read his “Torque” column here, which takes a critical look at the mobility industry.