Why was Abramovich’s billionaire friend left off the UK sanctions list? 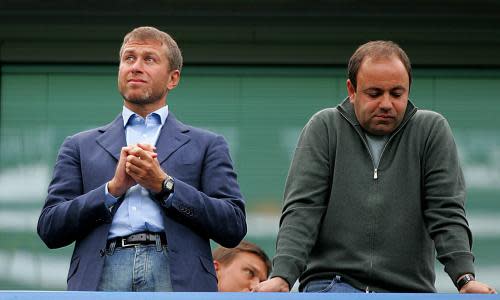 In March 2000, five of Russia’s wealthiest oligarchs met in a suite at London’s Dorchester Hotel to discuss a multibillion-dollar merger involving some of the world’s aluminum industry’s biggest assets.

The tycoons – one of whom came from a legal hearing in the House of Lords – discussed Russian politics, the aluminum wars in their country in the 1990s and the creation of the industrial giant Rusal.

A decade later, that hotel summit was at the center of a £3 billion court battle between two of those present, Roman Abramovich and Boris Berezovsky, over the allocation of the abundant resources from the privatization of the government-controlled industry. state of Russia, including aluminum. fusion. It was the costliest private court battle ever fought in British courts. Legal costs in the 2012 case were estimated at up to £100 million.

While Abramovich won the legal case, in which Berezovsky demanded compensation for his alleged involvement in aluminum assets, the roots of these global riches, and those involved in managing them, are now under intense regulatory scrutiny by the financial officials in charge of imposing sanctions against the regime of Vladimir Putin.

Two of the men at the Dorchester meeting on March 13, 2000 have since died. Berezovsky was found dead in the bathroom of his Berkshire mansion in March 2013 with a ligature around his neck. A coroner recorded an open verdict. Georgian oligarch Badri Patarkatsishvili, who was also present, died in February 2008 of a suspected heart attack.

Two others at the summit, Abramovich and billionaire Oleg Deripaska, the founder of Rusal, were placed on the UK sanctions list last week. Abramovich’s British assets, including the Chelsea football club, have been frozen. The Premier League has disqualified Abramovich as a club manager

Abramovich and Deripaska were among the seven oligarchs targeted by the move: the government says they are worth a combined £15bn. Foreign Secretary Liz Truss said officials would continue to “increase pressure on the Putin regime and choke off funds.”

The fifth person present at the 2000 meeting was Soviet-born billionaire Eugene Shvidler, a major shareholder in the London-listed global steel company Evraz, and a close friend of Abramovich.

Shvidler was also chairman of Millhouse LLC, Abramovich’s Moscow-based investment company, but resigned last week after sanctions were imposed on the Chelsea owner. Shvidler has kept a low profile for most of his business career, but is now in the spotlight after being mentioned in sanctions documents for his “close ties” to Abramovich.

A private jet, a Bombardier Global 6500, suspected of being related to him, was seized last week at Farnborough airport. Ministers are criminalizing the entry into UK airspace of planes owned or leased by Russians.

Shvidler has been described as Abramovich’s “right-hand man,” and the pair have often been seen together, including on a July 2015 trip to Scotland’s Isle of Arran. While Abramovich can be courteous and charming, Shvidler is described as more direct in business dealings. “He can be the bad cop for his good cop,” said one person who knew him.

Asked last week if Shvidler thought he might be at risk of sanctions, a spokesman said: “Mr. Shvidler is not, and has never been, a citizen of the Russian Federation. Mr. Shvidler is not a public person and he is not a part of current events. Mr. Shvidler was born in the USSR and left in 1989 as a stateless refugee. He settled in the US and became a US citizen in 1994. Since 2010, Mr. Shvidler is also a UK citizen, having arrived under the UK’s high-skilled visa program.”

Forbes has estimated Shvidler’s personal wealth at £1.3 billion. He has a house in Surrey and is said to own a superyacht, Le Grand Bleu, which is said to have been a gift from Abramovich. Her other holdings have included a Bordeaux vineyard called Château Thénac, a house in Colorado; and a £19m apartment in New York. He previously also owned property in Belgravia, London, which was sold in December 2012 for £55m to a company in the British Virgin Islands.

Shvidler and Abramovich built their fortunes after the privatization of the Russian oil company Sibneft in 1996. Shvidler was appointed chairman of Sibneft in July 1998. In the 2012 court case, the judge found that Abramovich accepted that he would not have gained control of Sibneft without the corrupt. Payments to Berezovksy to influence President Boris Yeltsin on the future of assets.

Shvidler resigned last week as a director of Evraz, along with nine other non-executive directors, including Sir Michael Peat, a former private secretary to Prince Charles. Abramovich is one of the main shareholders of his company and the Financial Conduct Authority suspended the trading of Evraz shares, pending the clarification of the impact of the sanctions.

The government accused the company of potentially threatening Ukraine’s territorial integrity, including possibly supplying the Russian military with steel that could have been used for tanks. Evraz denied the claims and said he did not expect his business to be affected by sanctions. He said that he supplied steel only for construction projects and that it had not been used in Russian tanks. Shvidler’s spokesman described the government’s accusations as “baseless”.

Shvidler was also previously a director of investment advisory firm MC Peat & Co, which was set up by Sir Michael Peat’s son Charlie. He resigned in May 2013.

Bill Browder, the financier and critic of the Kremlin, said last week that he welcomed the move against Abramovich and other oligarchs, but that sanctions now needed to be expanded. He said there should be investigations into “junior associates of these big oligarchs” and “relatives of the oligarchy who may have assets in his name.”

Shvidler’s spokesman said: “Mr Shvidler would like to make it clear that, like the rest of us in Europe, he hopes and prays for peace and an end to the senseless violence in Ukraine. We all hope that the war can end immediately.”