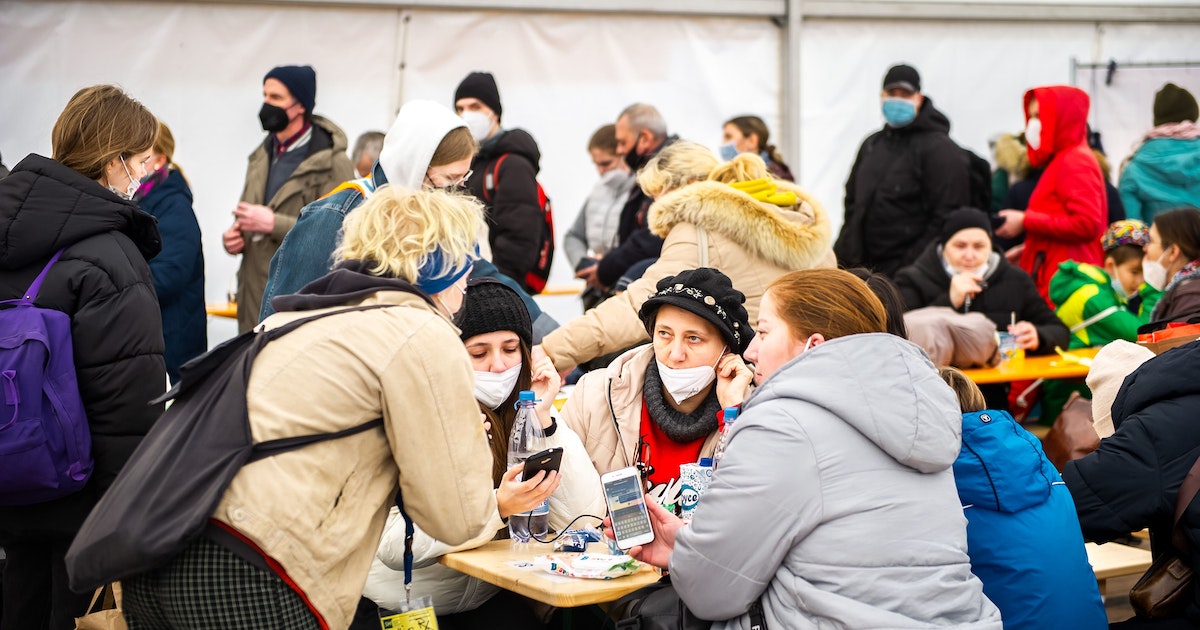 Sedan – On Thursday, March 10, on the 15th day of the Russian war of aggression in the Ukraine, the mood at Berlin’s central station set for the title of this column: It’s very brutal there and, unfortunately, very Berliner. Entering the lower lobby, which normally leads to the escalators down to U5, one is met with a strange smell, a mixture of sweat and lukewarm lentil soup. The room is packed with refugees from Ukraine. Some still lounge on donated air mattresses and yoga mats set up in part of the room. Others queue for tea or hot soup. Others run desperately and ask the BVG security guards standing at the edge of the corridor where they can get a SIM card. Only a few of the employees speak Russian and the desperate search continues.

This scene takes place amid the screams of nervous children and babies. At the same time, it is the scene of welcome for many Ukrainians who have fled the war and arrive at the main station in Berlin. For several days now, more than 13,000 people have been arriving in the capital every day, not only at the main train station, but also at the ZOB or Ostkreuz. In these places there are dozens of volunteers in yellow, orange and blue safety vests whose job it is to provide food, drink and help to these people, whether they want to stay in Berlin or continue to travel. On Telegram channels with thousands of members, these helpers organize donations, travel, and accommodation for refugees. Sometimes they work for days without sleeping. Many are exhausted, some with adrenaline. It is a burden, according to growing criticism, that they have to carry because the authorities in Berlin are overwhelmed.

Between distributing food and FFP2 masks to refugee families at the main train station, humanitarian worker Charlotte* can barely speak fast enough to explain the situation she and others face. “People from the Senate come every day and say, help will come tomorrow, the day after tomorrow. But so far we haven’t seen anything like that,” she says. “Here we have no organization, we have to take care of the garbage disposal and cleaning. The authorities have no plan and no idea.”

The woman speaks with horror of a promised catering service that has not yet been installed on Thursday morning. However, according to Matthias*, a colleague among the volunteers, its construction was scheduled for the afternoon. “We’ve gotten the Senate to finally take over the food supply,” says the volunteer. The seizure also came about because volunteers at the main station had given the Senate an ultimatum at 8:00 p.m. on Wednesday. The Senate should take over the food supply within the next 12 hours, otherwise the volunteers would withdraw. They are almost at the end of their strength. On Thursday morning, 90 percent of the food donations at the main station, from warm lentil soup to halal sandwiches to organic juicers, came from private sources, according to Matthias.

Potato soup would be nice.

No one expected this ultimatum to come. “We were still thinking last week that the Senate would commission non-governmental organizations to take over from us on Friday,” he says now. But nothing happened. Matthias and his colleagues had considered this Friday whether they should ask for help from large corporations such as Hello Fresh, Haribo or Nestlé instead of continuing to trust the Senate. When the first refugees arrived, the volunteers had no contact with the Senate. At least now there are regular crisis team meetings between the two parties and also representatives from BVG and Deutsche Bahn. But even after the most recent crisis team meeting Thursday morning, Matthias couldn’t say exactly which caterer the Senate had commissioned. He also got the impression that even the Senate staff at the meeting didn’t really know this.

On Thursday night, sandwiches, sweets, fruit and hot drinks were offered in the lower hall of the main station. But there was no hot food. Unfortunately. This was emphasized several times in the meetings of the Senate’s crisis management team with the volunteers: this was not possible due to the risk of fire and hygiene problems. “We stay in touch with the crisis management team and we really hope this will change at some point,” says Matthias. “You have to imagine: you escaped from a war zone, you sat on the train for three days and during that time you never knew when the next meal would come.” In such circumstances, a simple bowl of hot soup means a lot. “We’re not asking for anything crazy here. Even a potato soup would do,” says Matthias.

Assistant Matthias now says it very clearly. He asks for more transparency, more help from the Senate. “We often have to make decisions that we shouldn’t be making,” says Matthias. “If we stand at the station at 3 a.m. with 10 blankets and we have to decide which 20 children will get a blanket in front of us, then something has gone wrong. In such cases, beds or places to sleep would simply have to be found.” case, a child had to sleep in a cardboard box at the main train station.

After all, cooperation sometimes works quite well.

After all, the Senate now wants to take over the food. But Charlotte seems skeptical that catering will be enough. “We gave out 20,000 sandwiches in one day this week. When we asked the Senate for help, we received 4,000 sandwiches,” she says. Within two hours the sandwiches were gone. The visit a week ago by Mayor Franziska Giffey (SPD) and Berlin Senator for Integration and Social Affairs Katja Kipping (left) left many cold at the main station.”You hear a lot of complaints about politicians stopping by to take press photos and have small talk with some volunteers. They didn’t really deal with the chaos,” Charlotte said. “We’re still not really sure that the Senate understands how many people are here looking for our help and how big a problem it really is.”

For several days there has been a large tent in front of the main station, the so-called “Welcome Hall”. On Thursday morning, between 30 and 40 Berliner Stadtmission employees were working with about four employees of the mobile child protection and youth welfare team of the Mitte district office and their interpreters, confirms Barbara Breuer, spokesperson for Berliner Stadtmission. So far, the cooperation with the Senate and Deutsche Bahn has worked quite well, she says, despite a lack of staff due to coronavirus infections. The mission of the city, with more than 50 permanent employees, is to gradually set up “professional structures” to provide food and drink to the refugees, and to ensure their transport to arrival centers or other transport hubs in Berlin.

The Senate is lucky to have us

Such cooperation offers an important relief for the Berlin volunteers, says Yasemin Acar, one of the coordinators and initiators of the volunteer campaign at the Berlin ZOB. Malteser’s employees often travel to support Yasemin and his colleagues. The coordination works well, he says, but the work is organized almost entirely by volunteers. “We have been involved in this crisis from day one and now we have put in place a system so that we can respond quickly and flexibly to the needs of the refugees,” he says. For example, when unannounced buses arrive at the ZOB, its team of around 70 volunteers can care for up to 400 refugees; specific donations, such as diapers or baby food, can be transferred very quickly through Telegram.

Organizing transportation and accommodation is also a task that Yasemin Acar and her volunteers have taken on. Through Telegram, they have created their own databases of helpful Berliners. However, she thinks this was definitely more of a task for the Senate. “The Senate is lucky we exist,” she says.

Do you have an opinion about this text? Write us! [email protected]

This text appeared in the weekend edition of the Berliner Zeitung, every Saturday at the newsstand or here as a subscription.