Where are the limits of our universe? 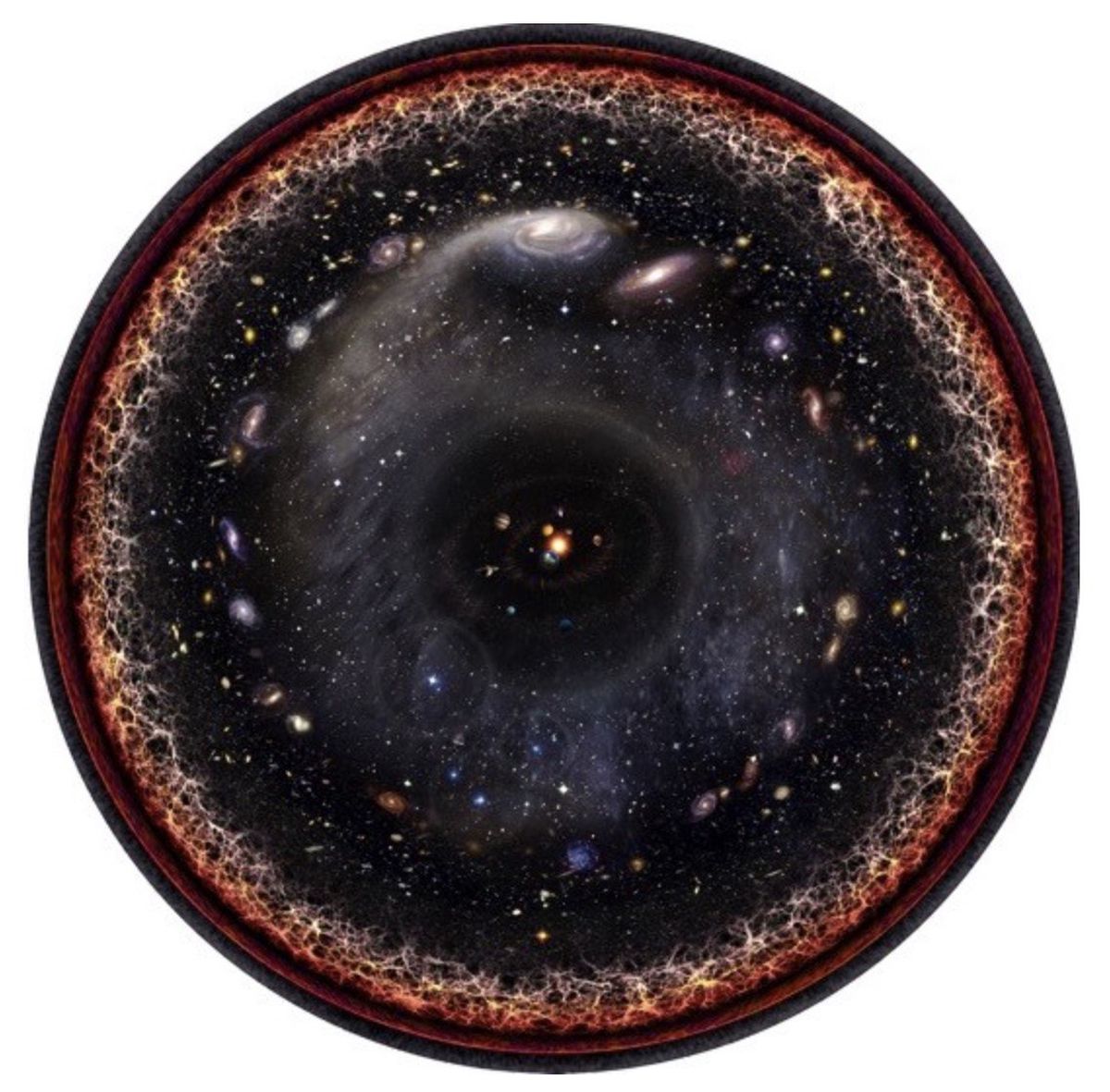 In the 1920s there was a heated debate among astronomers about the size of the universe and the nature of the so-called nebulae, diffuse objects of which several thousand have been catalogued. Some scientists argued that they were gaseous objects that were in our galaxy and that this was the entire universe, while others argued that they were star systems similar to the Milky Way, “island universes” that, because of their distance are diffuse. The debate was settled thanks to Edwin Hubble measuring the distance to the nebula from using the relationship obtained from Henrietta Swan Leavitt Andromeda, the only one visible to the naked eye from the northern hemisphere. Hubble’s value was much larger than the size of the Milky Way, proving the existence of other galaxies and dramatically increasing the size of the Universe.

It is customary to express astronomical distances in light-years. A light year is the distance that light travels in one year, approximately 9,000,000 million kilometers. The diameter of the Milky Way is 900,000 million kilometers and the distance to Andromeda is 22,500,000 billion kilometers. These distances are huge, even though Andromeda is part of the group of galaxies we call the local group, so our neighborhood. The truth is that the universe is so big that we cannot see it in its entirety because in its 13.8 billion years of life there are regions whose light has not had time to reach us.

The universe we can see, the known universe, is a sphere whose radius marks the distance between the regions that emitted the radiation we observe today cosmic microwave background radiation and our planet. If the universe were static, this boundary, which we call the particle horizon, would be 13.8 billion light-years away. However, it is at a much greater distance, 46,000 million light years.

The reason is that the universe is expanding, which Hubble also showed us in the article Relationship between distance and radial velocity in extragalactic nebulae, published in 1929. The title, of course, says nothing about the cosmological implications of the result, but it is informative. Hubble carefully measured the velocities and distances of a sample of galaxies and showed that they are receding from us in all directions, and faster the further away they are. Hubble was very cautious in his conclusions, but the implications were clear. Just five years ago, this scientist’s work had dramatically expanded the size of the universe and is now expanding the universe itself.

To illustrate how the result implies an expanding universe, the example of a walnut cake is often used. When we put it in the oven and it starts to grow, all the nuts see the rest go away. When the cookie doubles in size, two walnuts that were originally an inch apart will be two apart, while those that were three apart will be six apart. That is, during the same time, the distance between the most distant nuts increased three times more than the distance between the closest ones, that is, they moved away three times faster.

The background radiation was emitted in the early stages of the universe, but its light has traveled through an expanding universe for about 13,800 years before finally reaching us. However, these regions have been retreating all along, and the dots we see in the background radiation have evolved into galaxies and galaxy groups similar to those around us. If we could stop the expansion of the universe now, it would take another 46 billion years for the light from these galaxies to reach us. However, we cannot stop the expansion of the Universe, and we will never be able to see the galaxies that these blobs we see in the background radiation have become, no matter how long we wait. This is because these regions are moving away from us at a rate greater than the speed of light, so no matter how hard light tries, it can never travel the distance that separates them from us. In that sense, the particle horizonthe known universe, marks the visible boundary of the universe’s past, but not the universe with which we can interact.

Just a few days ago, in images taken with the James Webb Space Telescope, we were seeing galaxies whose light could have been emitted 13.5 billion years. Newly formed galaxies inhabiting a baby universe barely 300,000 years old. In a way, these images are images of ghost galaxies that are currently in a region of the universe that we can never interact with. Can we then say that they are part of our universe?

Then let’s define the boundary of the universe that we can interact with. Within this limit and as long as we have enough time, we can still receive the light that the galaxies are now emitting. This is the region of the universe that is expanding at a rate slower than the speed of light and whose limit is 16 billion light-years away. This limit is called event horizonin analogy to the event horizon of a black hole and marks the limit of the universe with which we can exchange information.

The sad news is that if the most accepted models of the universe are correct, the number of galaxies we can see in the future will be reduced until there comes a moment when everything disappears from view. Well, maybe not everything, because not all regions of the universe are expanding. Like the nuts in our pie, galaxies do not expand, neither the earth nor the trees nor us. The Local Group we are in is not expanding, and indeed the Andromeda Galaxy is approaching us, pulled by gravity. However, this gravity will cause all the galaxies that are not moving away to get closer and closer until they merge into one, which will be the only one that the astronomers who inhabit them will be able to observe. They won’t be able to measure the velocities or distances of other galaxies to know that the universe is expanding, and they will most likely revert to the assumption, like 19th-century astronomers, that the universe was made up of a single galaxy consists, their own.

cosmic emptiness it is a section in which our knowledge of the universe is presented qualitatively and quantitatively. It aims to explain how important it is to understand the cosmos not only from a scientific point of view, but also from a philosophical, social and economic point of view. The name “cosmic vacuum” refers to the fact that the universe is and is mostly empty, with less than 1 atom per cubic metre, although there are paradoxically trillions of atoms per cubic meter in our environment, inviting us to wonder about our existence and the presence of life in the universe.

Previous articleYoung people in Germany are leaving their parents earlier
Next articleAccording to the UGT FICA, almost 15,000 Spanish workers will take part in the harvest campaign in France, up 3%