When parents and children go to a party together: “It’s a way of enjoying with them; nothing, they won’t want to come with us anymore” 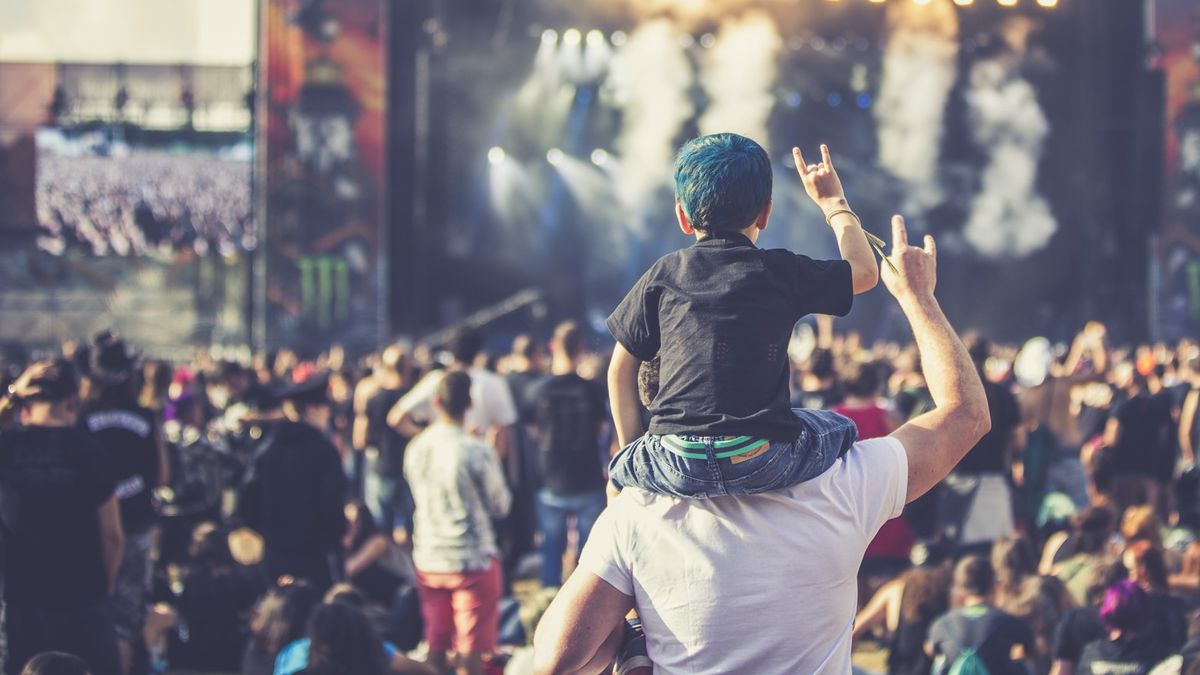 “These shoes make me look like I’m eight years old,” said six-year-old Cayetana as she entered Mad Cool, which took place July 6-10 in Madrid. In this year 2022, many young people are experiencing their first times at a festival, but the little ones do it with an even more special emotion, that of feeling like adults. Being able to go to your first musical appointment a few months after arriving in the world or being able to see your favorite group before the famous puberty are some of the new realities that appear in many events celebrated in Spain today. At the last edition of the Madrid Festival, where up to 70,000 people gathered in a single day, it was easy to find a significant number of children, especially when approaching the Ferris wheel instagrammable from the capital.

At this macro festival, minors up to the age of eight could enjoy the experience completely free of charge, but from nine to 16 the boys already had to buy their own ticket. Children had to be accompanied by adults unless they belonged to the exclusive 17 year olds club, in which case they could access on their own. The little ones had to register at the entrance and that’s what six-year-old Cayetana needed to be able to debut at an event of this nature and enjoy her idols, Imagine Dragons, as well as those of her parents, Metallica.

Something similar, but at a higher price, was experienced by Alejandro, Óscar and Javier, three brothers from Alicante aged 10, 14 and 15 who enjoyed the event accompanied by their mother and grandmother. “It’s very big, we expected it to be smaller,” they said. The eldest did not hide his desire to have this experience with friends, admitting that it is normal for young people to go to festivals at his age. Alicia, her parents, thought this was the exception and was surprised by the number of minors around them: “So you can enjoy something like that with them now, later they don’t want to come to festivals with us anymore.”

Jose and Virginia are the parents of Mario who, at 10 years old, is the universal heir to his family’s musical passion. With them he lived at a festival for the first time and he did it with several goals on his agenda, one being to see The Killers: “He knows all the songs, he comes home with the lesson learned”. His mother was so energetic festival goers Regular who took the opportunity to demand a discount on the ticket price – for example, the price of a three-day ticket for Mad Cool is 185 euros, while a single day costs 75 euros plus VAT – for those over eight and they were delighted very excited to have this experience with her son: “We want him to enjoy music and live it because it’s a way of life”.

Nobody doubts that the little ones are the quarry that these dates have to conquer if they want to stay alive, some more critical participants than usual, for which the organizers have to try even harder if possible. As demonstrated by Mario, who was aware of the possibility of repeating the experience: “When the night is over I’ll see if I come back”.

Resukids: the festival for children

Alba Guijarro, 38 years old and a native of Viveiro (Lugo), is responsible for one of the great children’s initiatives that are carried out at the circuit festival goers National: Resucids. Through his recreation and leisure company, Eureka, and with the resurrection festival showcase, she organizes every year in her city a small musical universe only suitable for minors: “The idea is that children can experience the festival in their own way and families can share this free time with them, but each according to his needs”. The project offers families many options so that the little ones can enjoy the experience: you can do it just for an afternoon, a whole day or sign up directly for the camp from the first to the last day of the festival.

Guijarro emphasizes the importance of dynamization: “In the afternoons we do activities inside the enclosure and in the mornings we supplement the offer with surfing courses, horseback riding or tattoo workshops.” They have a base camp that is one kilometer away summary 100% designed for the little ones: “We put bracelets on them with their phone number, some hats to keep them under control and we take them to the festival on a tourist train.” During the experience, they are the real kings of the event: “They are the bosses, we do it Loud, we shout and make the sign of the horns with our hands. People react very well when they see us.”

Once in the enclosure and to move around safely, the caregivers escort the little ones and their way has almost more privileges than that of their parents: “Let’s go to the VIP area for a drink, go to a stage and visit them backstage“. They have the privilege of seeing the festival as an audience and also experiencing the hidden part that everyone imagines: “Every day a band lets them on stage when they play and it drives them crazy. They burst into flames.” Just before they return to base camp on the Resukids train, and in an area farther from the crowd, they engage in more activities that vary by day: from a tin metal workshop to a game to a dinner with a visit to a concert.

This year up to 60 minors from all over Spain have registered every day, an audience between 3 and 12 years old. And all this for a price ranging from 40 euros for an afternoon to 355 euros for the five-day camp. With the latter, many have known each other from other years and meet up again every summer. Its organizer ensures that parents visit their children from time to time or even take them out to eat: “It’s vacation and we adapt. Each later continues with its parallel festival.” Guijarro admits that many families are already beginning to call for a similar camp, but for teenagers. Beyond Resukids, children up to the age of 12 can attend the festival for free and from 13 to 18 years old by paying their ticket and with the permission of an adult: “First the children came because their parents liked it, now they know music and ask for specific bands”.

The best way to go to a festival with a young child is to wear headphones, especially if they are babies, as the music is usually very loud. It’s also a good idea to bring water, sunscreen, a hat, a sweatshirt – even a change of clothes – a flashlight (there’s little light at night), and groceries so you don’t depend on what they sell on site. And to enjoy!

Primavera Sound and its Minimúsica room

Another great festival, Primavera Sound in Barcelona showed another year of commitment to reconciliation familiar thanks to Minimúsica, a space where the little ones enjoyed artistic workshops, games and live concerts inside the venue. With this in mind, the event made it easier for children under the age of 14 to enter the venue free of charge when accompanied by an adult with a ticket. In its last edition, this area of ​​the Parc del Fòrum was a stage for new generations to get to know the festival up close. From drum lessons taught by Shellac’s Todd trainer, to a concert poster spraying workshop passing through special performances by Santiago Motorizado, Ferran Palau or Chaqueta de Chándal. The initiative had activities for all target groups to bring music closer to children and had everything families need to feel comfortable: changing tables, hearing protection, nursing pillows, microwaves, high chairs and adapted bathrooms.

Previous articleiPhone 14 Ultra: The camera is stuck in the frame!
Next articleBank profitability remained at record highs in the first quarter, according to the Bank of Spain