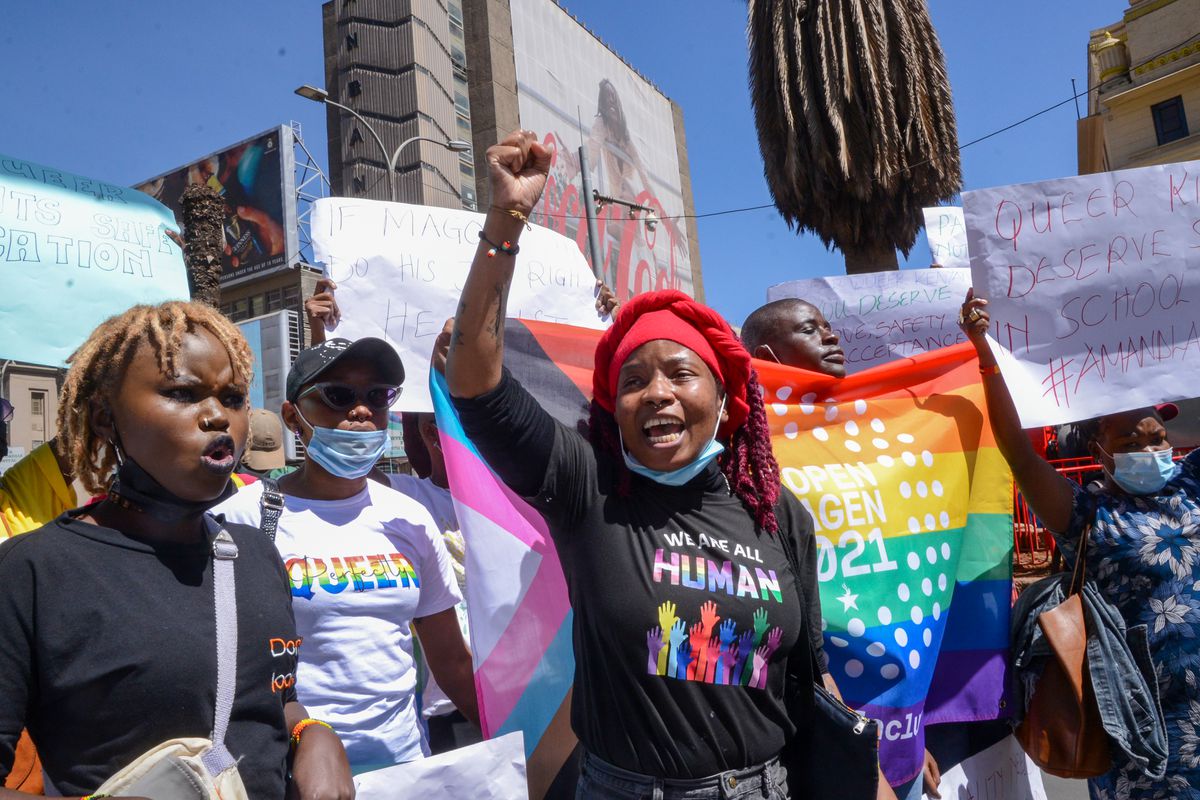 Matu (not her real name) describes her situation roughly and simply. “I’m a foreigner in a state that criminalizes the reasons that brought me here,” he says. Born in Kenya, where he grew up until everything went wrong, he now lives in Lilongwe, the capital of Malawi, a country in central South Africa and also one of the poorest countries in the world. Matu, a young man of almost 30, likes men. And that was too much at first in his place of origin, then in Uganda, the destination of his escape, and finally in Malawi. In these three nations and he is also an illegal person in thirty other African countries, someone who should be in prison. “The situation for the LGTBI collective is terrible. And the worst thing is that I don’t think it will improve in the next few years. I would be very surprised,” he muses.

Matu’s story begins in early 2017 in Muranga, a district of just over a million people in central Kenya. There he attended a boarding school, where he attended the final year of secondary school. He was just an ordinary boy, a guy who dreamed of going to university and studying law. But one day everything went wrong. Matu recalls: “We had classes in the afternoon from six to nine and a friend and I were a bit late. We came in from the showers… But the principal came over and saw us having sex… It was the start of the nightmare.” From there to the police. And from the police to ridicule, ridicule and tragedy.

Sections 162 and 165 of the Kenya Penal Code criminalize homosexuality with up to 14 years in prison. Regulations ratified by the Constitutional Court in 2019. Although there is a paradox: while the nation considers these relationships illegal, it also allows housing in two of its refugee camps (Dakuma and Dadaab) for people from other countries who seek asylum because they feel persecuted because of their sexual orientation. Such opening It does not correspond to what the country’s high levels express in their statements. Two examples: Archbishop Zacchaeus Okoth of Kenya even claimed that gays are anti-African and Ezekial Mutua, head of the state agency that classifies and censors films, blamed tourism for a sexual encounter between two male lions. “They copied the behavior of same-sex human couples. It would be necessary to study whether they are possessed by demonic forces,” he estimated.

“At the police station, the officers humiliated us. One of them ordered us to take off our underwear, the only thing we were wearing, to see a penis being inserted into a man’s anus,” Matu continues. And lets out a nervous laugh. “You wanted to see it! They wanted to see how it was done, for God’s sake!” Outside, he adds, he heard the screams of a crowd angrily claiming them. “The news had spread too quickly “Throwing animal intestines and waste, cow dung, banana peels. My friend was hit from behind and he started bleeding profusely. I took a moment when they were looking at him to escape; I jumped into a bush and ran.”

Matu says he ran as fast as his legs would allow. That he stopped when fatigue got the better of him and that he found himself alone, lost in a forest and cold in the darkness of the night. “In the morning, very early, I passed a farmhouse. I told him what I was doing Hike with some friends and that I had lost. He gave me breakfast, clothes and some money for transportation. So I took a bus and went to Nairobi.” But in his situation, he couldn’t stay here long. So he collected all his capital, about 3,000 Kenyan shillings (about 25 euros), and contacted a truck driver to take him to Uganda. Without a passport and papers, sneaking across the land border was his only chance to start a new life.

Uganda and its ongoing oppression

His new target greeted him with another terrible message. His mother, who lived in Kenya and was in poor health, could not bear the news of his homosexuality and died when she received the information. Some of his relatives accused him and threatened to kill him if he returned to his place of origin. But this idea did not occur to him. “In the capital, Kampala, I founded an association that supports refugees and LGTBI people. I told them my story and they helped me; At first they let me sleep in their offices. Later, when I made friends, I went into a rented apartment. But homosexuals are also punished in Uganda. The authorities treat them harshly. And society even more so. I was chased through the streets several times,” Matu recalls.

If the situation for the LGTBI community in Kenya is hopeless, things are not much better in Uganda. Laws are also homophobic and restrictive. Although rarely used, Article 145 of the Criminal Code provides for life imprisonment for consensual sexual relations between persons of the same sex. And Section 148 of the same text imposes penalties of up to seven years if the defendant or defendants commit what the text calls “other indecent practices” interpreted as oral sex or masturbation. And it could be worse. On two occasions in the last decade, the national government has pushed ahead with legislation providing for the death penalty for homosexuals, a rule that has met with widespread international opposition and direct opposition from Uganda’s Constitutional Court itself.

“Uganda is one trauma after another. People commit suicide, suffer in silence… The situation there is terrible,” says Matu. And given some of the events that have transpired over the past few years, his statement isn’t too far off the mark. The examples are many and varied. In November 2019, two major crackdowns on the homosexual community in Kampalaled to the arrest of hundreds of people and the performance of at least 16 anal examinations, a method used by medical authorities in Uganda (and other countries too) and which has been denounced and classified as torture by dozens of NGOs and international organizations.

“One day I was invited to a very cool party. It was organized by one of those associations that provide legal and personal protection to the LGTBI community. They even made a cake for us! There were a lot of people. Gay, lesbian and also trans. We were all handsome and sexy and had a great time. But suddenly the police came and the situation became dangerous. Some had to jump out of the window, others escaped as best we could…” Matu recalls. Under these circumstances, a few months after his arrival, the young Kenyan had no choice but to pack his few belongings back into a backpack and try to flee the country. A friend had told him about a refugee camp in the neighboring state of Malawi. It was mid-2018 and he would repeat the operation: He would cross the border hidden in a truck and try to settle in a new nation.

Malawi and the difficulties of poverty

Malawi is one of the poorest countries in the world, a nation that consistently ranks at the bottom of every verified index of progress. According to the United Nations Development Program (UNDP)Almost 51% of the 19 million inhabitants live below the poverty line. This organization places it 171st on its Human Development Index, a list that includes 189 areas. And Dzaleka, a refugee camp housing around 53,000 people, most of them from the conflicts in the Democratic Republic of the Congo but also from Rwanda or Burundi, is one of the places where this famine shines brightest. “I got there not knowing anyone and had to sleep outside for seven days. He did it on the ground, near the corn fields… He ate what he could, what he found,” the young man recalls.

He didn’t have to stay too long in Dzaleka. Due to his exceptional situation and the risk of suffering homophobia and violence in the camp itself, the United Nations High Commissioner for Refugees (UNHCR) granted him the status of Person of Interest, removed him from there and provided him with a room in a house , which this organization operates in Lilongwe, the country’s capital, for refugees and asylum seekers. But Matu’s troubles didn’t end there. “I was without money, without friends, without anything… And the situation for LGTBI people in Malawi, for nationals and also for those from outside, is terrible. I suffered it in my skin. People are forced to live alone and hidden,” he says.

Like Kenya and Uganda, Malawi is also not a good place for LGBTI people. The Penal Code punishes same-sex relationships with up to 14 years in prison, and although the laws criminalizing homosexuality have been the result of heated political and legal debates over the last decade – even leading to their virtual suspension – , Malawian LGTBI Citizens continue to suffer from restrictions on their rights and general living conditions. “When you talk about poverty in this country, you have to mean not just development, but also education and narrow-mindedness. If anyone here sees you kissing another man… They see it badly, very badly. I think it’s really difficult to accept something like that in the short or medium term,” Matu estimates. “I had a lot of problems. They beat me up in the first house, so I had to leave.”

Matu says she had to become a prostitute to earn some money and pay for her food and basic necessities, and she contracted an STD as a result. “What could I do? I needed to stock the fridge. I started working nights in a bar and there were people offering me sex for money. Men and women. I looked good; he was handsome, presentable… I attracted a lot of people,” he says. Some time later he left that life and now lives in another of the Acnur houses, watching the days go by without being able to show himself as he is. Hidden, anxious. And trying to forget a cruel and unfair past tense. “I know that in order to be comfortable with my present, I have to accept what happened to me in the past. But I still have trouble sleeping some days. That’s why I use marijuana and alcohol. It helps me clear my head and forget. And in the future we’ll see what happens to me,” he concludes.