What has left us the first stage of the motorcycle world championship? 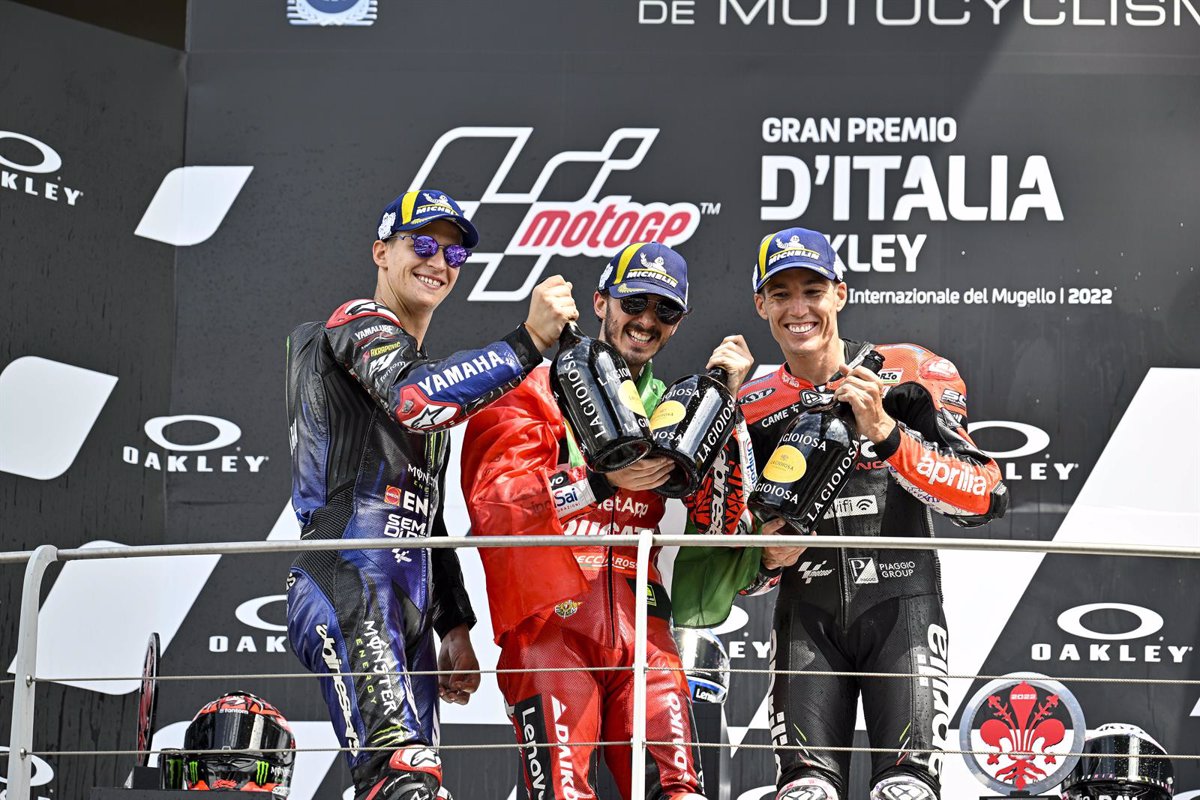 Next weekend the motorcycle world championship returns to action after a holiday break of almost a month and with all the championships still to be decided and with Spanish options in all. We’re using this return to Silverstone to review the highlights of the first part of the season.

1. Fabio Quartararo, Sergio García Dols and Celestino Vietti, leaders. After eleven Grands Prix appearances, these three riders are the respective top finishers in MotoGP, Moto3 and Moto2, although the Italian shares points with Augusto Fernández. The Frenchman leads Aleix Espargaró by 21 points and the Castellón man by three points ahead of compatriot and teammate Izan Guevara

2. Fabio Quartararo, the most “normal” in MotoGP. The reigning world champion in the “Queen” category leads thanks to his regularity. The Frenchman has won just three of the 11 Grands Prix (Portugal, Catalonia and Germany) and has been on the podium a total of six times, but apart from Assen he has not made any mistakes.

3. Francesco Bagnaia and Enea Bastiani, the others to repeat the win. Along with the “Devil”, the two Italian riders on Ducatis are not only the only ones to have repeated first place on the podium, but they have taken the same victories as the Yamaha rider, three though not by much at the moment accustomed to them since they are 66 and 67 points away from the champion respectively.

4. Aleix Espargaró breaks a personal and Aprilia barrier. The Italian factory had never won a MotoGP race and made history at Argentina’s Termas de Río Hondo circuit thanks to the Spaniard, who also finally broke his winning record in a World Championship, where he made his debut in 2004.

5. A monumental mistake. The man from Granollers was also an accidental protagonist due to his mistake at the Catalonia Grand Prix when he celebrated his second place with one lap to go. He eventually finished fifth but let slip valuable points that seemed tight and which could be crucial in his battle with Quartararo.

6. Another year without Marc Marquez. The Spaniard, eight-time world champion, will not be able to complete the World Cup this year either. After the Italian Grand Prix at the end of May, he decided to undergo surgery for a fourth time to solve his right arm problems caused by his crash at Jerez in 2020. Despite not scoring in five races, the Catalan is the season’s best Honda Championship with 60 points.

7. Surprise farewell to Suzuki. The Hamamatsu factory, champions 2020 with the Spaniard Joan Mir, unexpectedly announced that they would leave the World Cup at the end of this season. His other driver, Alex Rins, has already found a team in Honda’s LCR and it remains to be seen where the Spaniard will end up.

8. Quartararo, Fernández and Guevara, the only ones to chain wins. These three riders, one from each category, were the only ones able to string together consecutive wins, two in any case. The French and Balearics did it at Montmeló and Sachsenring, while the Madriders did it at Sachsenring and Assen.

9. Spain and Italy, dominance in victories. The two countries show their strength in this sport and have a total of 13 wins each. García Dols (3), Guevara (3), Augusto Fernández (3), Jaume Masiá (2), Aleix Espargaró (1) and Pedro Acosta (1) are those who have brought victories to the national motorcycling and Bastianini (3) , Bagnaia (3), Vietti (3), Tony Arbolino (1) and Dennis Foggia (1), in Italian.

10. Spanish triplets. Spain managed to be on the podium twice. Aleix Espargaró, Alex Rins and Jorge Martín made it in Argentina in MotoGP, and Izán Guevara, Sergio García Dols and Jaume Masiá in Jerez in Moto3.

11. Aleix Espargaró and Deniz Oncu, absolutely. The Spaniard and the Turk, who competes in Moto3, can boast of being the only ones in the entire World Championship grid to have scored a point in every Grand Prix to date.

12. The Kings of Saturday. Among the drivers who dominated qualifying, ‘Pecco’ Bagnaia leads with four ‘poles’ while Guevara and Vietti each added three.