What does Russia intend by changing its plans in Ukraine? 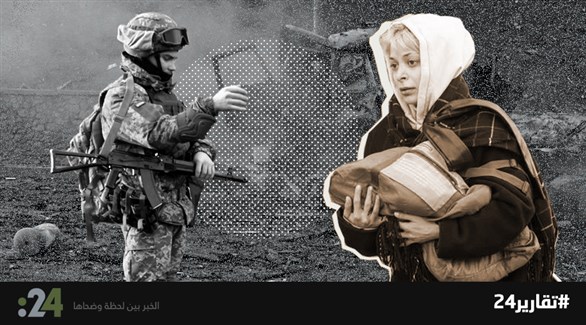 Ivan Gershkovich and Isabel Coles wrote in the American newspaper “The Wall Street Journal” that Russia’s decision to change its war plan in Ukraine indicates Moscow’s attempt to secure land near its borders, which it had carved out years ago and prepared the ground. by the fierce fighting in an area that was already destroyed more than a month ago by the war.

Russia’s change in its war plan highlights the faltering of the Kremlin’s broader efforts to control most of Ukraine.

With the Russian attack entering its second month, Russia does not fully control the Donbass border region. Russian Defense Ministry spokesman Maj. Gen. Igor Konashenkov said on Saturday that his country’s forces are fighting to seize two villages around Donetsk, a city controlled by Moscow-backed separatists since 2014.

On Friday, Moscow announced that it was close to completing the first phase of its military operation in Ukraine. “Our forces and resources will be focused on the main goal – the complete liberation of Donbass,” said Chief of the Main Operational Staff Sergey Rudskoy.

While Biden was in Warsaw
Despite this, Russia does not limit its military operations to the territory of eastern Ukraine. On Saturday, Russian missiles hit the outskirts of Lviv, according to its mayor, Andrey Sadovy. The city is located just 40 miles from the Polish border. The attack took place while US President Joe Biden was visiting Warsaw, just 340 kilometers away.

Ukrainian forces said Russian forces are regrouping in preparation for their new attack on a disputed area stretching from Lugansk along the Russian border with Ukraine, west to the southern city of Mariupol, which is Witness street fighting as Russian forces are trying to take it over.

This area is considered strategically important for the Kremlin, because Moscow aims to secure a “land bridge” between western Russia and Crimea, and extend its control to the Donbass.

The Donbass industrial zone stretches along the eastern border of Ukraine bordering Russia. Russia has long occupied parts of the area, ever since fueling an insurgency there in 2014. Russian-backed separatists managed to capture parts of Mariupol in the early stages of the fighting but were pushed back by Ukrainian forces. Intermittent fighting lasted eight years, killing 14,000 people, before Russia launched its massive invasion last month.

The head of the Luhansk Region Military Administration District Sergey Heidi said Russian forces are attacking warehouses in Severdonetsk. He noted that supplies of food and other necessities are being distributed to basements and shelters where people are hiding throughout the area. Efforts are being made to evacuate civilians to safety and restore communications where possible.

According to a US military official, Moscow’s focus on Donbass comes at a time when Ukrainian forces have recaptured areas that Russian forces had controlled at the beginning of the invasion on February 24. In recent days, Ukrainian forces have pushed the Russian army out of the vicinity of the town of Mykolaiv, west of Mariupol, and are fighting the Russians in Kherson, the regional capital of the province they had previously captured.

front lines
The Ukrainian forces deployed in that region are the most powerful, as they are stationed on the front lines against Russian-backed separatists.

The writer believes that Russia’s change in its war plan highlights the hesitancy of the Kremlin’s broader efforts to control most of Ukraine. When Russia invaded Ukraine, he did so on several fronts, with the aim of capturing kyiv, the capital, and other parts of the territory. In the first days of the fighting, Ukrainian forces managed to repel an airdrop to seize control of the city, stop tank columns moving towards it and slow the advance of Russian forces in other areas.

On Saturday, Anatoly Byplov, president of South Ossetia, the Russian-backed breakaway region in Georgia, announced that his forces would join the war in Ukraine. According to a US official, Russia is already looking to bolster many of its forces by recruiting Syrian fighters.