What are the best selling cars in Europe? Asian companies increase sales in May 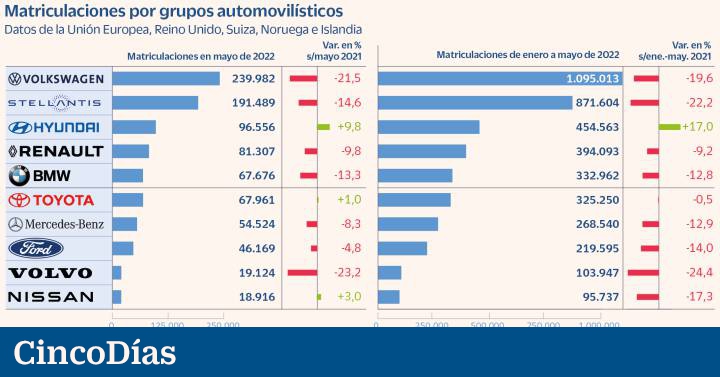 The big European automakers continue to lose ground to Asian brands in the sales battle on the Old Continent. In a complicated context for the industrywith registrations continuing to fall (down 12.5% ​​in May and 12.9% in the cumulative figure for the year across Europe, including the UK), due to the chip crisis, Asian firms Hyundai, Toyota and Nissan were the only ones in the top 10 who managed to increase their deliveries in the fifth month of 2022.

Hyundai, which has increased its share by 2.5 points to 10% of the European market so far this year, is the one that continues to rise the most, according to data released this Thursday by ACEA, the European employers’ association of automobile manufacturers. In May, the South Korean (including Hyundai and Kia) sold more than 96,000 units, up 9.8% from a year ago, and ranks third for most deliveries of the month.

Toyotaup 1% (it was the 5th best-selling car company in May) and Nissan (10th in the ranking), which increased its registrations by 3%, saw more modest growth.

If instead of the month the is taken into account of the year accumulatedof the big automobile companies Stellantis has seen the biggest drop in registrationswith a breakdown of 22.2%, up to nearly 872,000 units. For his part Volkswagenthe manufacturer with the most deliveries on the old continent, down 19.6% through May, with 1.09 million cars sold. Closing the podium is the aforementioned Hyundai, up 17% so far in 2022 (it’s the only automaker to grow into the top 10 in the cumulative figure for the year), extending its lead Renaultthe fourth stays.

On the other hand, the data offered by ACEA shows that the development of registrations is very uneven between the different countries. Although across the European Union the decrease is 13.7% up to May, Several Eastern European nations were able to increase their registrations. Romania with a plus of 32.9% and Bulgaria with a growth of 17.5% are the markets that have developed best so far this year.

On the contrary, among those that fall the most is the third most important market in Europe, Italythe nearly a quarter collapsed by May, 24.3%with 557,000 new cars delivered. Francethe second largest country with the highest sales volume, fell 16.9% over the same period compared to 2021 up to 600,000 units.

Spain, itself the EU’s fourth largest market, fell by 11.5%below the European average and just slightly above the decline of the continent’s largest market: Germany, which was down 9.3% to May with just over 1.01 million units.

In Spain, the market gave a good sign in May Restoration of sales to the private and business channels, with increases in registrations of 4.3% and 3.3% respectively. However, the overall drop in registrations is explained by the sharp drop in rentals, which fell by 41.4%.

“This improvement [del canal particular y de empresas], which places the month of May in the best record of the year, may reflect a growing interest on the part of buyers who are resuming vehicle purchases despite the economic and international context. We’ll have to await developments in the coming months to see if this is a one-off situation or a first sign of recovery,” he said. facethe national association of manufacturers when the May dates were released in Spain.