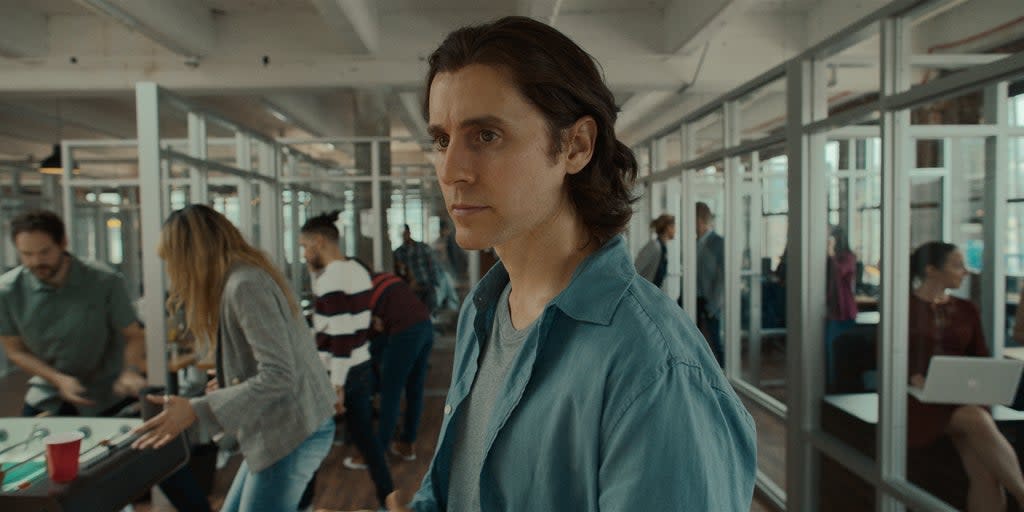 You already know the exercise. A fast-rising entrepreneur or influencer falls unceremoniously from dizzying heights. First comes the long read exposition. Then comes the podcast series. Then the book. Then the documentary. And then, sure as night turns to day, comes a streamer’s star-studded biodrama.

Fake heiress Anna Sorokin just had the jobs completed, thanks to Netflix’s Inventing Anna, and Theranos founder Elizabeth Holmes was just played by Amanda Seyfried in The Dropout. (Jennifer Lawrence will play the deep-voiced biotech entrepreneur later this year.) Next on the conveyor belt is Adam Neumann, the shiny-haired would-be messiah who co-founded WeWork, now played by Jared Leto in WeCrashed, premiering on AppleTV+ next week. His wife Rebekah, who is also Gwyneth Paltrow’s cousin, as we are repeatedly reminded, is seriously played by Anne Hathaway.

The appetite for these stories is obviously strong. They throw fascinating provocations at things great and lofty, both in what we as a culture are willing to buy, and in human nature itself. But it’s hard not to feel that, by the time the long-winded process of turning it into a drama is over, we’ve been told the story so many times that we feel a little stuffed.

That’s certainly the case with WeCrashed, which doesn’t add anything new to what we already know about WeWork’s history and often feels too much like a chore. Far better to watch the concise and thought-provoking documentary WeWork: or the Making and Breaking of a $47 Billion Unicorn, full of interviews with people who were there. And a clip of Neumann talking about his IPO plans with Ashton Kutcher.

We Crashed understandably opens with a dramatic ending: The board is trying to track Neumann down so they can oust him, as it’s clear the joint venture, once valued at a staggering sum, is making too many losses. to go public as had been planned for a long time. Also, having sold the concept to the world, it looks more and more like a drag. The fact that Neumann walks into the office to the thunderous sound of Katy Perry’s Roar and is not wearing shoes suggests that he is unaware, or perhaps in denial, about the impending disaster. He is flanked by his wife Rebekah, who is a strong believer in energy and says things like “fear is a choice.”

Then we go back to the beginning, when Neumann was in business school, trying to convince people to invest in his ideas (like…baby knee pads), and Rebekah is training to be a yoga teacher. After a testy initial meeting (Neumann, problematically, wears a mesh vest), the pair fall in love, Rebekah encourages him to ditch the ill-fated schemes, and he comes up with an idea that will give the world true meaning. Soon, Neumann meets architect Miguel McKelvey, who becomes his WeWork co-founder. Played by Kyle Marvin, he seems to exist here mainly to say variations of “I’m not sure if that’s a good idea.”

It’s easy to see why method actor Stan Jared Leto was drawn to a character like Neumann, a larger-than-life figure with iron gonads and an impressively brazen ability to sell his ideas. Yet he strangely feels like something is missing, like trying to rise above media characterizations has turned everything a bit beige. I never thought I’d say this, but I really wanted Leto to be bigger. Hathaway also seems to be trying to add some humanizing complexity to Rebekah, but it all feels a bit sanitized.

Overall, the series is a bit like the ‘Hustle Harder’ neon signs that adorn the WeWork offices seen here: flashy but vague. What made the WeWork story fascinating is that it seemed like an attempt to tap into a specifically millennial sense of yearning for meaning and community. Or as Neumann says here, people “don’t want to make a living. They want to make a life.” But far from being disruptive, wasn’t it merging them so tightly together that it was actually reinforcing capitalism’s tendency to blur the boundaries between work and life?

Even more intriguing is the way Neumann seemed able to exploit the anxiety of missing “the next Facebook.” The company amassed a colossal valuation only to spend it in part, it seems, because Neumann was good at disguising himself as a charismatic tech genius steps away from changing the world, and he began to believe his own hype. “I am an entrepreneur…and I live for disruption,” he says here at one point. (WeWork, it must be said, finally went public last year and just predicted a 30% revenue increase as people return to offices.) But these things feel underexplored at the expense of more mundane territory, though trouble doesn’t go away any time soon.

However, that fear of missing out obviously carries over to the world of television. The race to grab the next viral story is fierce. It hasn’t even happened yet, but when I think about the amount of content he’s going to create… I’m already exhausted.

The first three episodes of WeCrashed air on AppleTV+ on March 18, followed by a new weekly episode.

- Advertisement -
Share
Facebook
Twitter
Pinterest
WhatsApp
Previous articleApplication to help refugees from Ukraine with orientation
Next article“You can’t stop Putin with doves of peace”: Everyone wants the end of the war, but the path is controversial – Berlin