Weil and Honé travel to the island: Brexit and energy 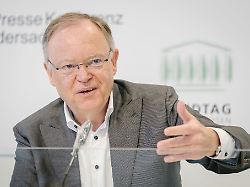 Lower Saxony and Bremen
Weil and Honé travel to the island: Brexit and energy

Hannover (dpa/lni) – The Prime Minister of Lower Saxony, Stephan Weil, is traveling to Great Britain together with the European Minister, Birgit Honé, to talk about economic cooperation and prospects for energy policy. The two SPD politicians will be accompanied on the trip by representatives of business and science, as the State Chancellery announced this Sunday. “We want to use the time in the British Isles to explore further opportunities and prospects for cooperation after Brexit,” Weil said.

Initially, several talks with British ministers, representatives of the Labor Party and a forum on general political developments after Brexit and in the face of war are planned in London. The delegation travels to Scotland on Tuesday. The prime minister is combining the Edinburgh visit with energy policy interests, he said. This cooperation had become significantly more relevant as a result of the war. “A direct import of green hydrogen from Scotland to Lower Saxony could become a reality within a few years,” Weil said.

For companies from Lower Saxony, the UK remains the third largest sales market after the Netherlands and France and therefore enjoys a high priority in the exchange of economic policies, as he told the German press. Alexander Altmann, board member of the British Chamber of Commerce in Germany. Agency. “With immense natural resources in wind power, Scotland is also positioning itself as a global player in the export of green hydrogen, which can be a solution to Europe’s energy independence,” he said.

Brexit has severely affected German foreign trade with Britain, Altmann said. This was also felt by companies in Lower Saxony, which now sell significantly less to the UK than before Brexit. For Altmann, Weil’s meeting with Scottish First Minister Nicola Sturgeon also indicates that they not only want to expand the exchange between the two regions, but also that future energy agreements such as liquid hydrogen will be discussed.

- Advertisement -
Share
Facebook
Twitter
Pinterest
WhatsApp
Previous article3 historical events that changed the course of the Oscars… “War and assassination”
Next articleAgainst Russian missiles: Germany could have its own “Iron Dome” based on Israel’s model