Watch Klay Thompson start to find his groove, score 38 in the Warriors win 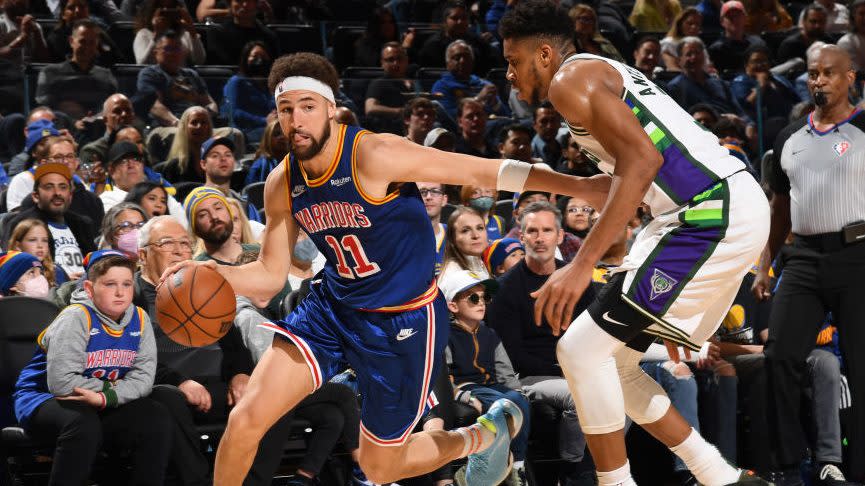 SAN FRANCISCO (AP) — Klay Thompson has been waiting for his shot to start dropping consistently, and he certainly found a rhythm for Golden State against defending champion Milwaukee.

Thompson scored a season-high 38 points, raising his right arm in triumph to ignite the home crowd and lead the Warriors to a 122-109 victory over the Bucks on Saturday night.

Thompson shot 15-for-24 with eight 3-pointers and had his second 30-point performance since returning Jan. 9 from a two-year absence following knee and Achilles surgeries.

“I’m sure it’s a relief,” coach Steve Kerr said. “He is so hard on himself and wants so badly to be successful.”

Giannis Antetokounmpo had 31 points and eight rebounds, but the Warriors’ defense stopped the rest of the Bucks. Milwaukee had won six in a row.

This was a bad night for Milwaukee on the injury front.

New forward DeAndre’ Bembry, only signed last month when the Nets released him, injured his right knee and was helped to the locker room with 2:31 left in the third quarter. He came down hard along the sideline jumping to defend Poole’s 3 point attempt.

Bembry was receiving an MRI exam.

“We just have to wait and see what that looks like,” coach Mike Budenholzer said. “… It seemed like tonight was one of those nights where Klay was going to hit some hard shots, which were well defended. His offense and his shooting were better than we could defend. Credit to him. He had a great night.”

Serge Ibaka received points in the first half for a laceration to his right eye after being injured in the first quarter. He came back briefly and scored 15 points.

Andrew Wiggins added 21 points, six rebounds and four assists for the Warriors. Poole started for the second time in the last 13 games and shot 9 of 16, while Stephen Curry had eight points and eight assists on just seven shots.

Golden State held Milwaukee to 41.3% from the floor, with Khris Middleton going 3-for-11 in the first half before finishing with 18 points on 6-for-19 shooting. The Bucks were 17-for-44 from deep.

See more about the Warriors

Stephen Curry brings joy to the young fan who cried when Curry missed the previous Warriors-Nuggets… Three things to know: On the big stage, Durant steps forward as Harden melts NBA Power Rankings: the Suns stay in first place, but the Celtics, the 76ers win