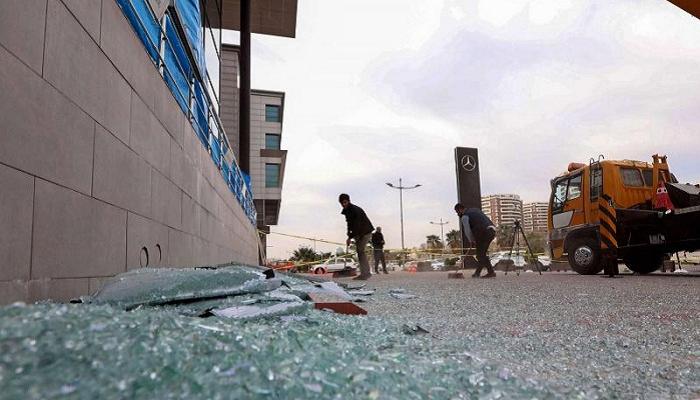 Today, Sunday, the US ambassador to Iraq said: “We condemn the blatant attack on Erbil and affirm that Iran must be held accountable for this blatant violation of Iraq’s sovereignty.”

While the Iranian Revolutionary Guards militia announced on Sunday its responsibility for the missile bombardment that targeted the Erbil Governorate in Iraqi Kurdistan, the Iraqi Kurdistan government denied the Iranian accusations.

The Revolutionary Guards militia claimed, in a statement published by Iranian media, that their attack on Erbil was related to previously announced “Israeli crimes”.

She claimed that “last night, the strategic center of the Israeli regime’s conspiracy was attacked.”

The Revolutionary Guards warned Israel that “the repetition of any evil will be met with harshness, decision and destruction”, as it stated.

In turn, the Iraqi Kurdistan government confirmed that the site that was hit by Iranian missiles is a “civilian” one.

Several consecutive explosions occurred near the Erbil airport in the Kurdistan region of Iraq, in the early hours of Sunday morning.

Eyewitnesses told “Al-Ain News” that “explosions occurred in the early hours of Sunday night, and their sounds were heard near the vicinity of the airport in Erbil Governorate.”

Witnesses confirmed that those explosions were “missile strikes due to the nature of their severity and the location of the target where the US Consulate is located.”

The Iraqi news agency quoted Erbil Governor Omid Khoshnaw as saying that “several missiles fell on Erbil, the capital of the Kurdistan region in northern Iraq.”

Dr. Saman Barzanji, Minister of Health for Iraq’s Kurdistan Region, said “the explosions in the city of Erbil caused no casualties or injuries.”

The Iraqi Army Security Media Cell announced the opening of an investigation into the bombing that targeted the city of Erbil.

Meanwhile, the Counter-Terrorism Service in Iraq’s Kurdistan region said: “The attack was carried out using 12 ballistic missiles fired from outside the country.”