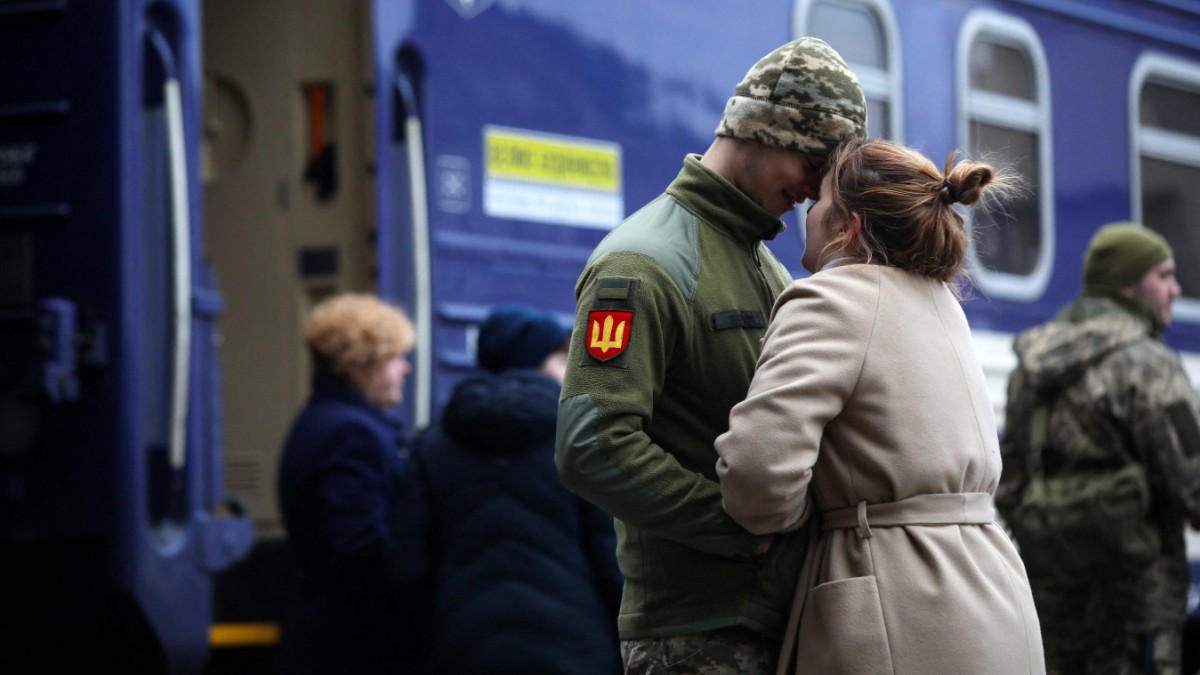 While adult men under the age of 60 are currently barred from leaving Ukraine and are supposed to defend the country, while an increasing number of male volunteers from other European countries provide military support to Ukraine, millions of women are leaving the area. of war. Dramatic parting scenes between women and men, parents and their families take place at Ukrainian train stations and at the border. What happens to equality and gender roles when there is war? Historian Claudia Kraft works at the University of Vienna on comparative contemporary European history and on gender relations in Central and Eastern Europe.

Claudia Kraft: Flight and defense are a logical reaction to a brutal war of aggression imposed on this country. It is true that many men want and need to stay in the country. But I wouldn’t see it as a consolidation of old gender roles. That would not fit at all with the conditions of Ukrainian society.

In war, the representation of masculinity always plays a role. From a historical perspective, it’s interesting right now how images of masculinity differ.

what do you mean?

Selenskij does not present himself as a martial man, but as a good friend from the street who talks to his people. In contrast to a Putin detached from the people, he represents a completely different masculinity. Interestingly, however, he is not a military man either, but rather a masculinity in a suit.

There are also impressive photos of the mayor of Kiev, the boxer Vitali Klitschko: how he hugs women in the Kiev metro, a few days later he can be seen on the field with a machine gun. What is being communicated?

Klitschko is adept at portraying a diverse and modern masculinity. You can see that he is capable of taking on different roles, including comforter and protector. Defense poses are then all the more effective in their effect. He shows that men in the Ukraine, and you can see clearly with Zelensky, just didn’t wait to play military, hyper-masculine roles. But they’re getting in there as a result of the robbery. This is also important for a global audience to see.

That means the world public is no longer as receptive to the authoritarian masculinity embodied by Putin, but is it to modern heroism?

Yes. This conflict takes place between an authoritarian or dictatorially ruled Russia and a Ukraine that has been on its way to becoming a modern, pluralistic society for more than a decade, one might even say since 1991. If you are waging a war over political values, it would be hard to convey if you only saw heroically exaggerated tough men.

What role do women play?

We see women taking responsibility for their children and their elders. It’s incredibly brave and independent to run away, so it just seems like a “traditional image of women” at first glance. You see actors who take risks, who care and take care of their loved ones.

What about women in Ukraine?

They are usually very emancipated and have a lot to lose in this war. That still has something to do with the employment of women in the Soviet Union, but also with how women had to function during the transition period. The welfare state collapsed, they had to make ends meet, there was no way to retire to being a housewife.

How important is equality in Ukraine today?

The Western women’s movement initially struggled there in the 1990s because the very idea of ​​such a movement had been ruined by Soviet state feminism. The country has been a member of the Council of Europe since 1995 and, since the beginning of the 21st century, has approved several conventions dealing with equal opportunities for women in the workplace and the fight against domestic violence. It is also part of the democratization of a society that gender justice is established through legislation.

In Germany, Ukrainian women are stereotypically associated with the themes of the marriage market, surrogacy, forced prostitution, that is, the exploitation of femininity.

This is not the problem of a supposedly backward Ukraine but the problem of Western Europe. There is a neoliberal and problematic attitude towards Eastern European countries, which are seen as a kind of repository for cheap caregivers and bodies available for Western needs through surrogacy.

Together with two colleagues from the University of Vienna, he recently published a statement on the “special situation of women in Ukraine”. Why is this necessary now? One could also point out the special situation of young people who are now forced to take up arms.

I also wondered: Isn’t this the time when everyone has to come together and stand up for Putin instead of talking about gender? But in a society that is already far from being democratic and pluralistic, as is the case in Ukraine, issues such as gender equality, the recognition of difference and the rights of LGBTQI people are of paramount importance. It must also be emphasized in times of crisis, also and precisely because that is precisely what Russia does not want.

Historically, is war more of a kind of leveling machine or does it not drive a deep divide between the sexes?

If you look at wars in the 20th century, things are very different. Of course, with the armament and mobilization of soldiers, there is an incredible change in the image of men. And while women are challenged as actresses, they are also often victims. This sacrifice is also used as a propaganda stylistic device in the sense of the demand: “We have to protect our women.” However, the real distortions tend to emerge in the post-war period.

The return of militarized men to civilian life, as we saw after World War II, is a difficult process. Especially with defeated armies. Then, at the expense of women and families, male dominance was restored in peacetime.

A refugee woman is seen differently than a refugee man, right?

Yes, we are experiencing this in a very extreme way right now. The incredible willingness to help in Poland, for example, certainly has a lot to do with the fact that the people who come are mostly women, children and the elderly. And perhaps also because they are Christians from the neighborhood.

Looking at the experts today, one gets the impression again: war is still considered a matter for which men are responsible, women take care of the human side.

In historical studies, the question is always: Who has the opportunity to tell an event? When a war ends, the victories are the stories that are told the most, and perhaps also the defeats. But everyday life, which takes place in the state of exception, is not counted. In the end it comes down to who won and who lost. Not about how people continued to support families or sustain village communities during the war.

Now an exorbitant special fund is being created for the Bundeswehr. Is remilitarization a threat to equality in this country?

I do not think. A positive process is taking place here in these dire times. Germany has been good at always looking far ahead and being pleased with itself. Now the federal government, but also society, is asking: What is really happening around us? And can we stand smugly and say that we don’t define ourselves militaristically, we’ve gotten over the fact that there is war and peace?

But doesn’t such a process change the DNA of a society?

Maybe. He would only say as a historian that the DNA of a society changes a lot. Legislative acts such as the separation of marriage affect gender equality in a much more sustainable way than the question: do we have to reconsider how we position ourselves in the world?