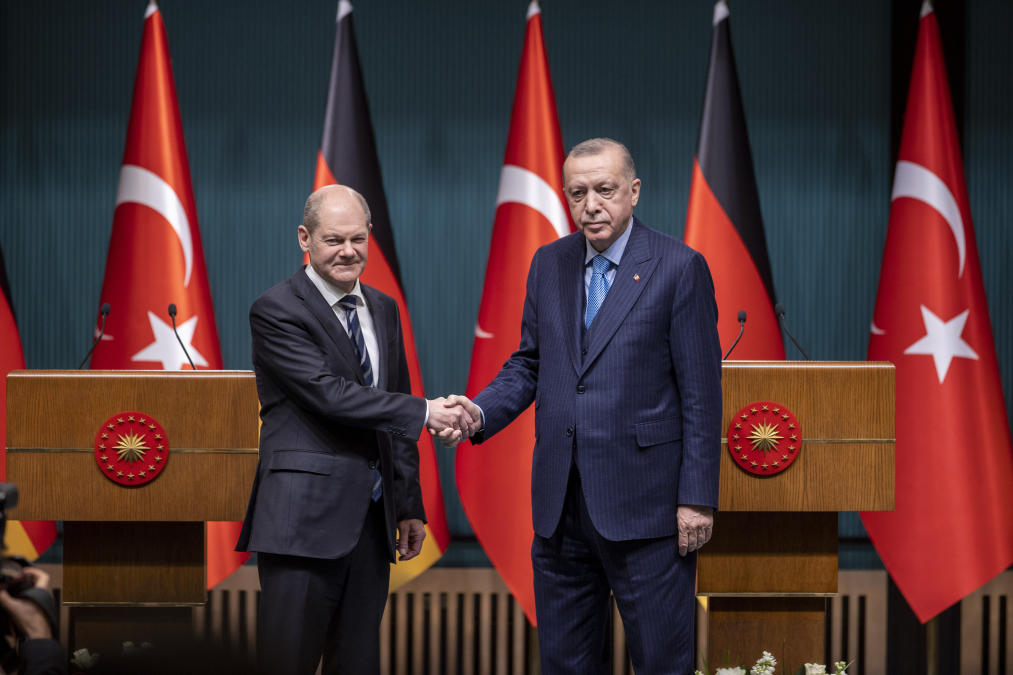 Russia continues to attack targets in Ukraine. Ceasefire negotiations are not advancing. According to the Kremlin, the Russian armed forces aim to capture large cities. A Putin confidant reveals problems with the attack.

kyiv/Moscow – The ceasefire negotiations between Russia and Ukraine have been interrupted again without tangible results. According to Ukrainian information, they should continue this Tuesday. For the first time, a senior official in Russian President Vladimir Putin’s apparatus has admitted that the Russian attack is not going according to plan. Moscow now does not rule out the capture of large cities. There was a brief hope for the desperate people in Mariupol: according to Ukrainian information, the first civilians were able to leave the besieged port city.

According to US government estimates, the Russian military is slowly advancing towards the Ukrainian capital of kyiv. One of Putin’s supporters, the head of the Russian National Guard, Viktor Solotov, explained regarding the military operation: “I would like to say yes, not everything goes as fast as one would like.” He spoke of the fact that the “Nazis” hid behind the citizens, in schools, kindergartens and residential buildings.

In view of the development, there is growing concern that the war will escalate further. UN Secretary-General António Guterres warned: “The prospect of nuclear conflict, once unthinkable, is now back within the realm of possibility.” In recent weeks he had called the use of nuclear weapons “unimaginable.”

During his first visit to Turkey, Foreign Minister Olaf Scholz (SPD) called for a ceasefire together with President Recep Tayyip Erdogan. They appealed to Putin: “Wait.” Scholz emphasized: “Every day, with every bomb, Russia moves further away from the circle of the world community that we form together.”

Russia launched an illegal attack against Ukraine on February 24. According to the Interfax agency, Putin’s spokesman Dmitry Peskov on Monday explained the military plans as follows: At first, Putin instructed the Defense Ministry to refrain from an immediate attack on metropolitan areas. However, the ministry does not rule out taking full control of large populated areas. The reason is that “nationalist formations” have placed military equipment in residential areas.

Russian and Ukrainian negotiators began new talks via video on Monday. The break until Tuesday is a technical break for talks in the working groups and a “clarification of individual definitions,” Ukrainian presidential adviser Mykhailo Podoliak said.

Ukraine demands the end of the war and the withdrawal of Russian troops. Moscow is demanding that kyiv recognize the annexed Black Sea peninsula of Crimea as Russian territory and breakaway areas in eastern Ukraine as independent states, and that Ukraine declare its neutrality.

According to Russian information, the number of Ukrainian military objects destroyed since the beginning of the war is now about 4,000, including more than 1,200 tanks and armored vehicles. According to Moscow, pro-Russian separatists in the Luhansk region are still facing strong resistance from Ukrainian troops. In the northeast of the city of Sieverodonetsk a fight against “nationalists” was taking place, Russian Defense Ministry spokesman Igor Konashenkov said. About 100,000 people live in the city.

According to pro-Russian separatists, at least 20 people were killed by debris from a Ukrainian rocket in the eastern Ukrainian city of Donetsk. Children are among the victims. kyiv denied the accusations in the evening. It was “clearly a Russian missile or some other type of munition.”

According to Ukrainian sources, the Antonov Aircraft Works site in kyiv, known for its cargo planes, was bombed. Moscow confirmed overnight that the Russian military had destroyed “a large ammunition depot for multiple rocket systems” at the Antonov plant. There was heavy fighting north and east of kyiv. The information provided by both parties cannot be independently verified.

Image caused a sensation around the world: Pregnant woman dies after attack

After several failed evacuation attempts, the first civilians apparently managed to escape from Mariupol. The city council announced in the early afternoon that more than 160 private cars had left the city on Monday. However, a convoy with relief supplies did not make it through the siege ring, nor did the buses that should have brought more civilians to safety. The situation in the fenced-in city is considered catastrophic.

A few days after an attack on a maternity hospital in Mariupol, a pregnant woman and her unborn child were killed, the Ukrainian Foreign Ministry said. A photo showing the pregnant woman being carried on a stretcher by several men through the destroyed clinic complex caused a worldwide sensation. A second pregnant woman in polka dot pajamas was also seen in the photos. This woman has now given birth to a girl, according to media reports.

A journalist for the US broadcaster Fox News was injured near the Ukrainian capital kyiv, the broadcaster said. “We have few details at this time. He has been hospitalized and our teams on the ground are working to gather more information,” he said.

Since the Russian attack, 1.77 million people have fled to the safety of Poland. This was announced by the border guard through the short message service Twitter. The number of war refugees in Germany is also increasing. The Federal Ministry of the Interior announced that 146,998 people had registered since the attack began. According to the UN, a total of around 2.7 million people from Ukraine have sought refuge abroad.

The location of nuclear power plants in Ukraine.

According to the Ukrainian operator Ukrenergho, the old Chernobyl nuclear power plant is once again without electricity. The line supplying the plant and the nearby town of Slavutych north of kyiv was damaged by Russian forces, Ukrenerho said. Initially there were no comments from the Russian side. According to Ukrainian sources, Russian troops blew up parts of an ammunition depot not far from the occupied Zaporizhia nuclear power plant.