War babies: Ukraine’s surrogate newborns waiting for their parents in a kyiv basement 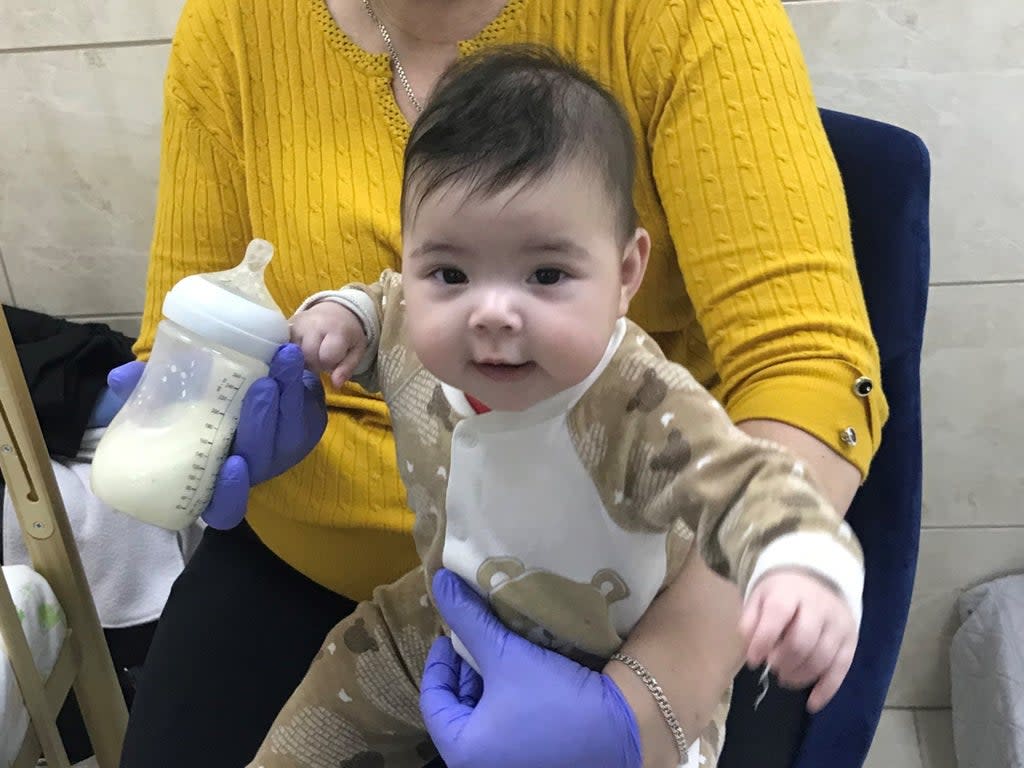 The youngest was only three days old, the oldest five months. They lie in rows of cots in a basement bunker to protect them from missile and artillery strikes, innocents trapped by war, with deep uncertainty about what the future holds.

The babies were from surrogate mothers of foreign couples who are now unable to come to Ukraine to pick them up after the Russian invasion, while the violence makes it too dangerous to try to get them out of the country.

There were 11 nannies left to care for the 21 babies at the BioTexCom clinic in kyiv out of 50 who were there before the conflict began and have now left to be with their families, many of them in safer areas outside of kyiv.

“It’s hard work for those of us here, we’re sleeping two to three hours a night if we’re lucky, that’s how it’s been since the shelling started,” Antonina Yefimovich said. “My family moved from kyiv. But I will stay here. What choice do I have? We are not going to abandon these babies.

“Most of the little ones would have already been picked up. The five-month-old has been here much longer than usual, but his parents are Chinese and sometimes the Chinese wait a little longer than others to pick them up, now of course they have been caught up in the war.

“We live in this basement 24 hours a day, apart from going upstairs to shower. There are bombings every night. Most babies normally sleep, but it’s very worrying for us, not only for what can happen here, but for our families at home.”

The clinic is located in a housing estate on the eastern edge of the city. The road leads to cities like Irpin, which have become battlefields, with fierce fighting as Russian forces try to encircle kyiv. There are explosions of artillery rounds as Ms. Yefimovich, 37, speaks. “Do you think they’re getting closer?” asks one of her colleagues.

The surrogacy market in Ukraine is one of the most active in the world. Ukraine is one of the few countries that offers this service to foreign couples. Many other states, mainly in Asia, that used to offer it have stopped after concern led to the exploitation of vulnerable women by middlemen.

However, Ukrainian law also stipulates that biological parents must confirm their nationality in person, creating major problems in establishing legal guardianship of babies in the current turbulent circumstances.

Clients have been coming to Ukraine from countries such as Britain and the United States, China and Japan, Argentina and Australia, France, Germany, Italy and Spain, as it became known as a reliable place for surrogacy.

Around 15 companies are in business, with BioTexCom being the largest. Surrogate mothers receive between £15,000 and £20,000 per birth, a relatively large amount for a country that has experienced economic problems.

Around 2,500 children are born by surrogacy each year in Ukraine and it is estimated that around 500 women are expecting babies for foreign clients. The births will take place in nursing homes and then the babies will be transferred to specialized clinics.

Sofiye is three and a half months pregnant with a surrogate baby. She had planned to move to Vinnytsia, 120 miles from the capital, with her two children as the likelihood of war grew. But then she had to cancel the trip because her mother got sick.

Most of the little ones would have already been picked up. The five-month-old has been here much longer than usual.

The 28-year-old former shop worker, who did not want her last name published, said: “Of course I had no idea it was going to burst when the procedure was carried out, no one expected this to happen.

“I am very worried about what is going to happen, I am very stressed, I have been sick and I am worried that it could affect the baby. It would have been better if we had left kyiv, I think that is what the couple whose baby I am having wanted, but my mother is not well, so we cannot leave.

“I’m doing this [surrogacy] because I want to help people who can’t have babies, I was told that the couple who wants this baby have been trying for over twelve years, so I feel good that I can help.

“So I’m unemployed, I was just getting casual work. I am separated from my husband, I have to take care of my son and daughter, my mother, and the rate was good. I know that the baby is my responsibility until the parents can pick it up. The company I am working with has discussed delivery with me. I am praying now that the war ends soon and I can give birth to a healthy boy or girl.”

Ms Yefimovich, whose work is not linked to Sofiye’s company, said: “Obviously the new babies will mean more work for the clinics, but that is the situation and we must learn to cope.”

Pointing to shelves of baby food, medicine, diaper packs, bottles and changing mats laid out, he continued, “The clinic keeps us well stocked and I think they will continue to do so. The problem is more the lack of personnel and the impact it is having on us, we are…”

A colleague, Svetlana Stetsuik, chimes in: “Zombies, we are like zombies right now with lack of sleep and tiredness, it is very difficult to stay awake, but you have to do your job and take care of the babies.

“My family is not in kyiv, they keep asking me to come back home, but there are so few of us left that it would be unfair to my colleagues and the babies of course. We have to try to keep them safe until they can go to their new homes.”

Both Ms. Yefimovich and Ms. Stetsuik were bitterly angry with Vladimir Putin for the disaster he had unleashed.

“We had so many links between the two countries, Ukraine and Russia, friends and families, all of this has been destroyed, I can’t see that we will ever go back to the way we were,” said Ms Yefimovich. “I feel angry at Putin for what he is doing, I feel angry at the Russians who believe the lies they are being told.”

Ms. Stetsuik said simply: “The Russians are at war against innocent people, women, men, children and babies. That is the terrible thing that is happening here.”

The Independent has a proud history of campaigning for the rights of the most vulnerable, first running our Welcome Refugees campaign during the war in Syria in 2015. Now, as we renew our campaign and launch this petition in the wake of the development of the Ukrainian conflict crisis, we call on the government to go further and faster to ensure that aid is delivered. To find out more about our campaign to Welcome Refugees, Click here.