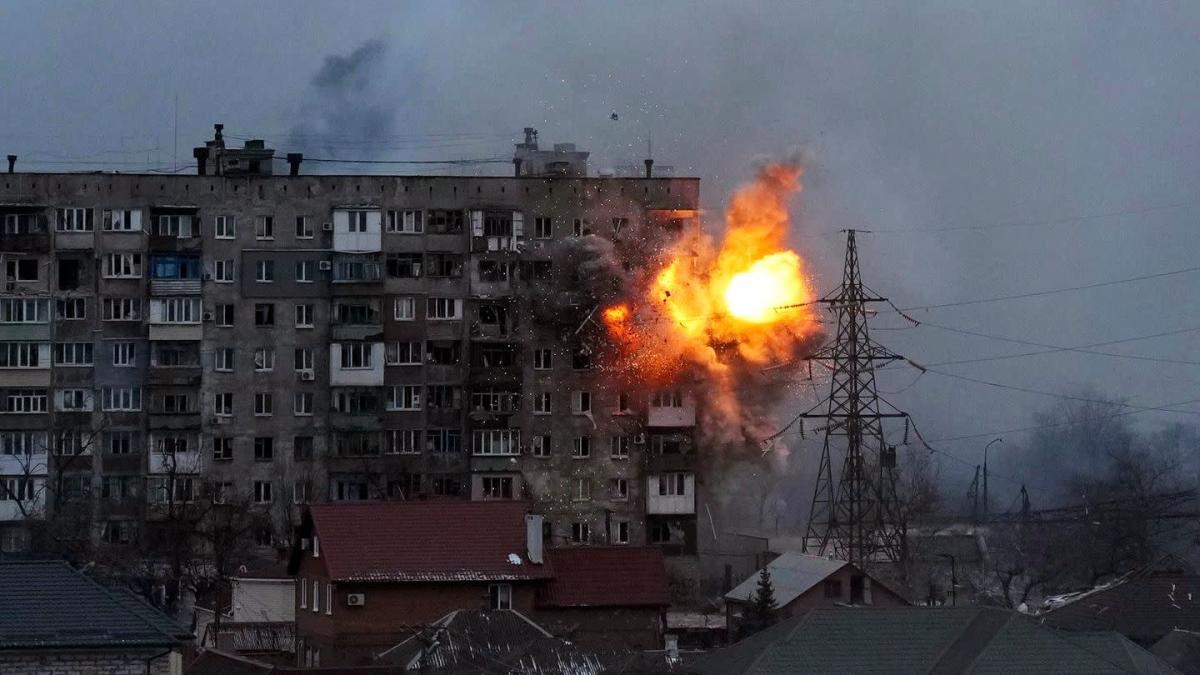 “Garbage, they don’t let us sleep,” wrote Vitaly Kim, the governor of the Mykolaiv region in southern Ukraine, on Telegram on Saturday night. A few hours earlier, he had told a Ukrainian television channel that at least one person had been injured in the town of Mykolaiv and that several houses and cars had been damaged. Two fires also broke out in the city due to rocket fire. According to a local official, the city’s cancer clinic was also damaged.

In the capital, Kiev, flight alarms were activated at least three times on Saturday night. According to CNN, “minutes of” shelling could be heard in the city from afar on Saturday morning.

According to the Ukrainian military, there are Russian offensives around Kiev in the northern limits of the city near Sazymya and in a southerly direction near Vyschenky, according to a report by the Ukrainian general staff posted on Facebook last night. These offensives were partially successful in some areas.

To blockade the city of Chernihiv in northeastern Ukraine from the southwest, Russian units also tried to capture the towns of Mykhailo-Kozyubinske and Shestovytsya, some 15 kilometers away. Ukrainian President Volodymyr Zelenskyy said on Friday that a major water main in Chernihiv had been damaged by shelling. As a result, the city of almost 280,000 inhabitants was left without a water supply.

The report goes on to say that Russian Air Force strategic bombers used cruise missiles on the cities of Lutsk, Dnipro and Ivano-Frankivsk. Lutsk and Ivano-Frankivsk are located north and south of the city of Lviv, not far from the Polish border.

According to Ukrainian figures, the number of civilians killed in the port city of Mariupol has risen to 1,582. The humanitarian situation in Mariupol is catastrophic, according to a statement from the city council on Friday night on the Telegram news channel.

According to United Nations statistics, just over 560 civilian deaths have been recorded across the country so far. Ukraine assumes significantly higher numbers.

According to Russia, Mariupol is blocked. “All bridges and access roads to the city have been destroyed,” Colonel General Mikhail Mizintsev of the Russian Defense Ministry said in Moscow on Friday, according to the Interfax news agency. He claimed that Ukrainian “nationalists” had mined major roads and were opening fire indiscriminately. “By doing so, they are forcing the population to stay in their homes.”

According to the city administration, more than 200,000 people are waiting to flee. The city is under constant fire and shelling from the Russian army. “In addition, they have cut off the city from all directions,” Deputy Mayor Serhiy Orlov told the ARD “Mittagsmagazin”. According to him, humanitarian trucks are not allowed to enter the city. So far, several attempts to establish humanitarian corridors to rescue civilians have failed.

“I don’t know how to describe the destruction in our city. The city doesn’t really exist anymore. The images of Grozny and Aleppo – this is what Mariupol looks like right now,” Orlov said. The Ukrainian army is “very brave”, but against the air strikes of the Russian army the soldiers have no weapons to protect the lives of civilians.

The head of the human rights organization Human Rights Watch, Kenneth Roth, had already drawn parallels with previous destructions in Chechnya Grozny and in Aleppo in Syria.

The evacuation of people from besieged and besieged cities is expected to continue on Saturday. Six escape corridors are planned for the Sumy region in the northeast of the country, the head of the Sumy regional administration, Dmytro Schywytskyi, said on Telegram on Saturday night. According to this, civilians from the cities of Sumy, Trostjanets, Lebedin, Konotop, Krasnopillja and Velika Pysarivka will be taken to the city of Poltava in central Ukraine.

In general, evacuations remain slow. Some 3,800 people were evacuated on Friday, according to Ukrainian Deputy Prime Minister Iryna Vereshchuk, while hundreds of thousands remain trapped in cities like Mariupol surrounded by Russian troops. Residents of the suburbs of Bucha, Hostomel, Vorsel and the village of Kozarovychi, north of the capital, northwest of Kiev, were able to flee through humanitarian corridors, Vereshchuk said. There were no evacuations in Izyum, Mariupol and Volnowakha. The Russian side also reported new difficulties in evacuating civilians.

According to Ukrainian sources, Mayor Ivan Fedorov was kidnapped in the southern Ukrainian city of Melitopol, which was occupied by Russian troops. A video clip showed hooded people pulling a man out of a central building. This was published by the deputy head of the Presidential Office Kyrylo Tymoshenko on the Telegram news channel. Tymoshenko wrote that the mayor had been kidnapped. The information could not be independently verified.

President Zelenskyy has demanded the mayor’s release. Pressure on mayors or their “physical removal” will not help Russia take over Ukrainian cities, Zelenskyy said in a video address. Such an approach is a “sign of weakness” for Russia.

According to Russia, 82 military installations were destroyed in Friday’s attacks. Among them are four command and control centers of the Ukrainian army, a Russian Defense Ministry spokesman told the Interfax news agency. In addition, three air defense systems were hit. Three ammunition and fuel depots were also out of service. This information could not initially be independently verified. According to the spokesman, a total of 3,346 Ukrainian military objects have been destroyed since the beginning of the war.

According to US President Joe Biden, a direct military confrontation between the US military and the Russian armed forces must be avoided so that a “third world war” does not occur. The US military and NATO partners will unite and defend “every inch” of alliance territory “with full force,” Biden wrote on Twitter. “But we will not go to war with Russia in the Ukraine. A direct confrontation between NATO and Russia is World War III, and something we must strive to avoid,” the Democrat wrote. Ukraine is not a member of NATO.

During an appearance before friends of the party in the US state of Pennsylvania, Democrat Biden also commented on the debate over the possible delivery of fighter jets to Ukraine on Friday. There should be no situation where the United States sends American-manned planes or tanks to Ukraine, Biden said. “You have to understand that, you can’t kid yourself, no matter what everyone says, that means World War III,” the president said.