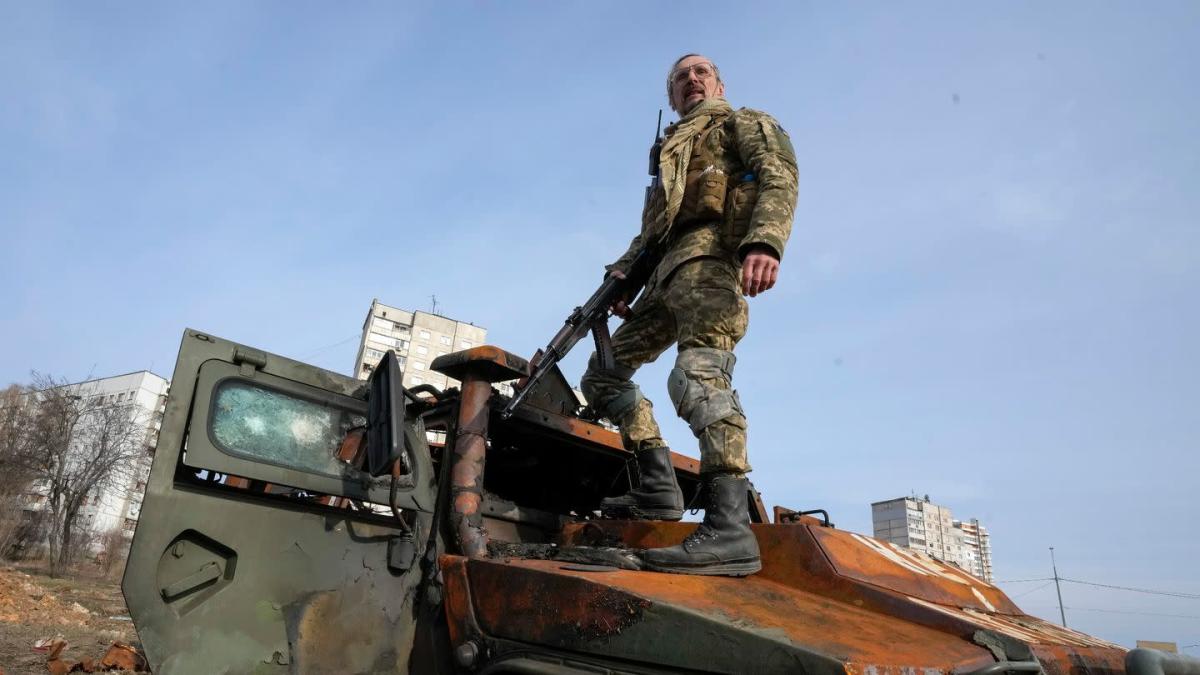 kyiv (dpa) – Hardened fronts on the ground, violent attacks from the air: According to both sides, Russia hit strategically important targets with rockets and cruise missiles in the Ukraine war.

Russia itself reported the destruction of a Ukrainian weapons stockpile west of the capital, kyiv. Ukraine confirmed the bombing of an air base. In Germany, the opposition is increasingly demanding an energy embargo against Russia to stop the financing of the Russian war.

Russian troops now have parts of the neighboring country to the north, east and south under control. However, the Ukrainian armed forces are putting up resistance and are probably pushing back some Russian troops, for example, in the city of Cherson in southern Ukraine and in the vicinity of kyiv.

However, the Chief of Staff of the Ukrainian Army, Olexander Grusewitsch, warned that a Russian attack on the capital was still possible, as Russia was massing strong forces there. Mayor Vitali Klitschko ordered a curfew for kyiv from Saturday night.

British Foreign Secretary wants to increase the pressure on Putin

British Foreign Secretary Liz Truss wants to put more pressure on Russia and President Vladimir Putin to bring the country to the negotiating table. “We need to intensify our sanctions. We need to send more weapons to Ukraine,” Truss said in an interview with Britain’s Sunday Telegraph. Then, when it comes time for negotiations, the UK should play a crucial role in supporting Ukraine.

On the one hand, Russia must be weakened economically at home, on the other hand, countries like Britain must continue to supply Ukraine with lethal weapons, Truss said. “Over time, this will reduce Putin’s chances of success and ensure that he loses in Ukraine.” Then it will be about reaching a ceasefire and the withdrawal of Russian troops.

According to British sources, Russian air and missile forces continue to bombard targets throughout Ukraine, including in densely populated areas. Russia continues to rely on so-called standoff munitions, which are fired from Russian airspace so as not to expose its own aircraft to Ukrainian air defenses, according to a British Defense Ministry update, citing intelligence information.

However, according to US reports, these Russian weapons failed in up to 60 percent of cases, which would further increase weapons supply problems on the Russian side, he said. This will force the Russians to resort to less sophisticated missiles or expose their planes to greater risks.

The “Neutronquelle” nuclear research reactor in the eastern Ukrainian city of Kharkiv has again come under artillery fire, according to Ukrainian media reports. According to the state nuclear supervisory authority, the reactor was shot at on Saturday, “Ukrajinska Pravda” reported. “Verification of the extent of the damage is impossible due to continued fighting in the vicinity of the nuclear facility,” he said. The plant had already been damaged in a bombing raid nearly two weeks ago and had been cut off from power supply. However, the reactor had already been shut down to a so-called subcritical state at the start of the war.

Runners to escape from Mariupol

Fighting since early March has badly damaged Mariupol, once home to more than 400,000 people. France, along with Turkey and Greece, is considering a rescue operation for the besieged civilian population. According to Ukrainian sources, ten humanitarian corridors have been established in other conflict areas to allow civilians to flee, for example, in the outskirts of kyiv and in the eastern Ukraine region of Lugansk.

According to information from Moscow, another 4,000 civilians were evacuated. In recent weeks, more than 98,000 people managed to escape from Mariupol without Ukraine’s help, the Russian Defense Ministry said. Russia and Ukraine have accused each other of sabotaging the evacuation of civilians from the Sea of ​​Azov port city.

According to their own statements, Ukrainian soldiers expelled Russian troops from a town not far from Sumy in northeastern Ukraine. The Russians left weapons, ammunition and equipment in Trostianets, several media outlets wrote on Saturday, citing the 93rd Brigade of the Ukrainian Armed Forces. Initially, the information could not be independently verified. The Ukrainian army had previously reported on the fighting in Trostianets.

The Sumy region has been under attack since Russia’s war against Ukraine began more than four weeks ago. There is also heavy fighting in the neighboring Kharkiv region.

According to Ukrainian President Volodymyr Zelensky, Russia is doing its best to “de-Russify” Ukraine by waging war against the civilian population. “Where the Russian has always been part of everyday life together with the Ukrainian, in the east of our country, where they (the Russians) are currently turning peaceful cities into ruins, Russia is doing everything possible to carry out derussification. on our territory.” Zelenskyy said According to «Ukrainska Pravda».

This “derussification” is happening “for this generation and forever,” Zelenskyy added. “This is another manifestation of his suicidal policy.”

Twelve journalists have been killed in Ukraine since the war broke out a month ago. Ten other reporters were injured in the course of the fighting, some seriously, Prosecutor General Iryna Venediktova said on her Facebook page. “Telling the world the truth about Putin’s aggression is deadly: 12 journalists have already died in the war,” she wrote. According to the reading of it, the journalists were killed by the Russian army.

According to investigations carried out so far, at least 56 media representatives have been attacked, including 15 foreigners. According to Venediktova, the foreigners included British, Czech, Danish, American, Swiss and citizens of the United Arab Emirates. An American, an Irishman and a Russian journalist were killed.