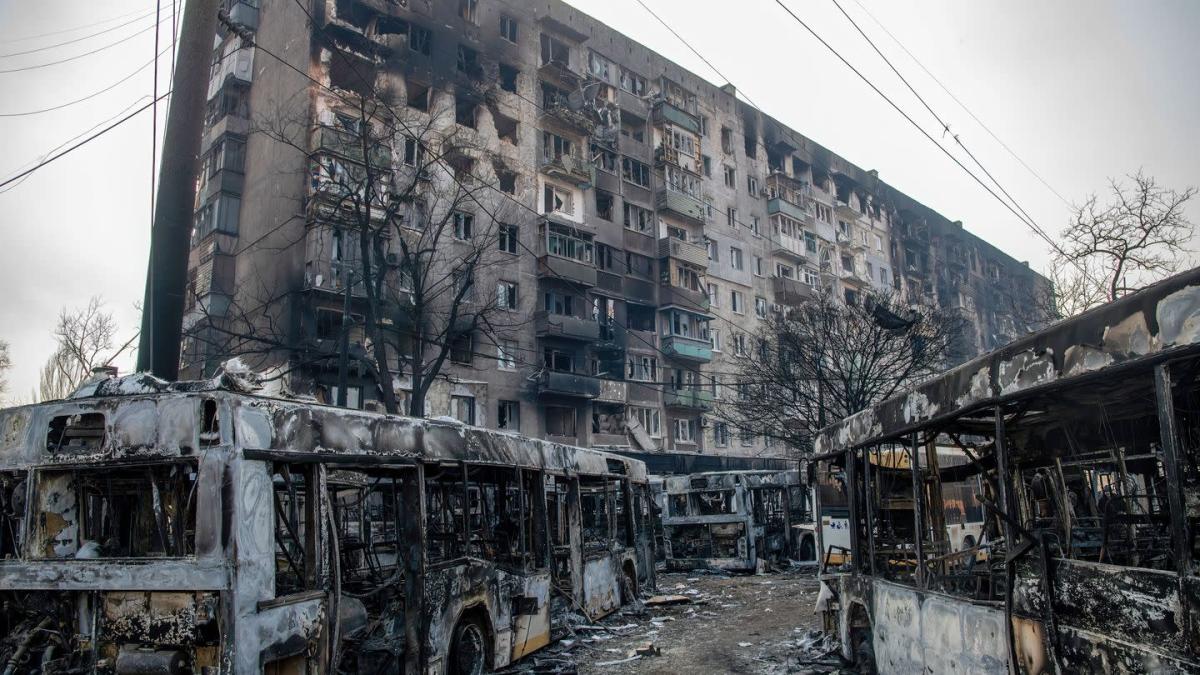 kyiv/Brussels (dpa) – Exactly one month after the Russian attack on Ukraine, Ukrainian President Volodymyr Zelenskyj called on people all over the world to protest against the war.

“Come in the name of peace, come with Ukrainian symbols to support Ukraine, freedom and life!” Zelenskyy said in a video address Thursday night.

The peaks are coming

Thursday will also be a decisive day for Western countries’ reactions to the war: NATO, the Group of Seven major industrialized countries (G7) and the European Union (EU) will meet in Brussels. This is the reason why US President Joe Biden came to Europe. According to his national security adviser, Jack Sullivan, the high-level discussions are intended to herald the “next phase” of military support for Ukraine.

“On these three peaks we will see: who is a friend, who is a partner, and who sold and cheated,” Zelenskyy said. We must work together and prevent Moscow from drawing members of NATO, the EU or the G7 to the side of the war. Meanwhile, the fighting in Ukraine continued with the same intensity. By order of President Vladimir Putin, Russia attacked the neighboring country on the night of Thursday, February 24.

According to the Ukrainian military, Russian units continue to attack numerous cities and areas, but have been prevented from advancing near kyiv. The Russian troops were stopped near the eastern kyiv suburb of Brovary, the Ukrainian general staff said. They also failed to break through the Ukrainian defenses to reach the northwest corner of the capital. On the contrary, according to British intelligence, Ukrainian troops have launched successful counter-attacks northwest of kyiv.

According to kyiv sources, the vast majority of Ukrainian units were under fire in the Donetsk region in the east. The Russian troops wanted to take the cities of Werchnoterezke, Marjinka and the hard-fought city of Mariupol. However, the reports from the combat zones cannot yet be independently verified.

According to the US Department of Defense, even a month after the start of the war, Russian forces have not seized air sovereignty in Ukraine. The United States and its allies worked to provide the Ukrainians with more long-range air defense systems. The Ukrainians use the systems currently in place “very effectively”. That’s one of the reasons “why we’re seeing quite risk-averse behavior from some Russian pilots.”

Russian bombing in kyiv on Wednesday killed Russian journalist Oxana Baulina, who worked for the independent investigative portal The Insider (theins.ru). Since the beginning of the war there have been reports of at least six journalists killed.

“Get out of your offices, your homes, your schools and universities!” Zelenskyy said in his call for global protests. The war is not only targeting Ukraine, but Russia is trying to nullify the freedom of all people in Europe and the world, he said. Moscow is trying to show “that only crude and cruel violence counts.”

The president in kyiv once again addressed the citizens of Russia in Russian. He is convinced that there are many people there who are “fed up” with the “lies of the propagandists”. Ukraine has never threatened the security of the Russian Federation and kyiv is doing everything possible to end the war.

Several forest fires have been successfully fought in the restricted area around the former Chernobyl nuclear power plant. Ukraine’s nuclear regulatory agency has informed the International Atomic Energy Agency (IAEA) that the Chernobyl city fire brigade has put out four fires. This was announced by the general director Rafael Grossi on Wednesday night. There was no information on the cause of the fire. Russian troops took control of the area around the nuclear power plant about a month ago. It was there in 1986 that the worst nuclear accident in the history of civilian use of nuclear energy occurred.

That’s going to be important today.

Russia’s war against Ukraine occupies international politics with the three NATO summits, the G7 and the EU in Brussels. The heads of state and government also have to deal with the issue of Russian energy supply. Putin ordered on Wednesday that “hostile states” like Germany would have to pay in rubles in future. If Western countries back down, they would lift their own sanctions against Russia’s financial system.