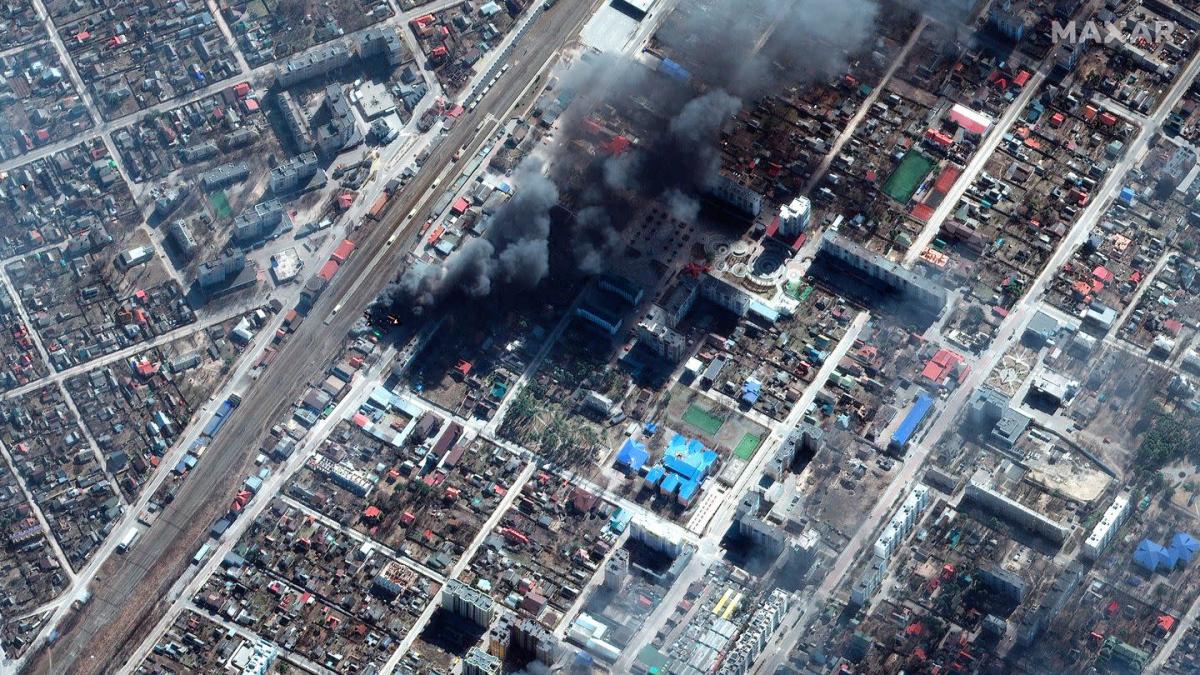 kyiv/Moscow (dpa) – After nearly a month of war in Ukraine, there is still little hope for peace. In view of the increase in violence against civilians, President Volodymyr Zelenskyj called on his compatriots in a new video message to resist against Russian troops.

Zelenskyy appealed to his compatriots to do everything possible to protect the state. “To save our people. fights Fight and help!” The head of state, who was in kyiv, called for the “invaders” to be expelled. In a video link outside the Italian parliament on Tuesday, Zelenskyy reported that at least 117 children had been killed. Referring to the Russian troops, he added: “They don’t stop killing.” According to his own statements, Selenskyj had telephoned Pope Francis before the change to parliament and advocated Vatican mediation.

According to the Ukrainian General Staff, the Russian troops are having more and more problems with supplies. They still have ammunition and food for up to three days, according to Kyiv. The situation with fuel is similar. Such information cannot be independently verified.

Zelenskyy describes the peace negotiations with Russia as “very difficult”. “They are very difficult, sometimes scandalous, but we are moving forward step by step,” Zelenskyj said in a video address distributed Wednesday night. Representatives of Ukraine participate in the negotiations every day. “We will work, we will fight as far as possible. Until the end. Courageous and open.” The negotiators are working tirelessly. “We can rest when we have won.”

At the same time, Zelenskyy thanked all the international forces that supported his country. Above all, he thanked the intermediaries “who bring a real image to Moscow.”

Meanwhile, diplomatic efforts to end the conflict continue. French President Emmanuel Macron has spoken with Russian President Vladimir Putin about the terms of a ceasefire.

US President Joe Biden will travel to Europe on Wednesday. Among other things, the EU, G7 and NATO summits in Brussels are on the agenda there. According to the White House, more sanctions against Russia will be announced there. An important element will be tightening existing punitive measures to make it even more difficult for Moscow to circumvent sanctions, national security adviser Jake Sullivan said. However, he also warned that the war would continue. “This war will not end easily or quickly.”

Russia’s Deputy Foreign Minister Sergei Ryabkov had previously stressed that he saw relations with the United States on the “verge of collapse” due to the war. As a condition for further talks with Washington, he named an end to the escalation by the United States. “You must stop making threats against Russia.”

According to information from kyiv, pro-Russian separatists have stopped an aid convoy not far from the besieged Ukrainian port of Mariupol. Fighters from the self-proclaimed Donetsk People’s Republic took a number of Ukrainian civil defense workers “hostage” in Manhush, ten kilometers west of Mariupol, Deputy Prime Minister Iryna Wereschuk said on Ukrainian television. This information could not initially be independently verified.

The arrested people were driving buses in which civilians were to be evacuated from Mariupol, Vereshchuk said. The escape route had been agreed with the International Red Cross. More than 100,000 people are awaiting an evacuation but are stuck in the Azov Seaside city, where observers say the situation is becoming increasingly dramatic.

Meanwhile, the Russian Defense Ministry said more than 68,000 civilians had been brought to safety from Mariupol without help from kyiv. These people are now “in complete safety under the protection of the Russian Federation.” kyiv, on the other hand, accuses Moscow of bringing women and children in particular to Russia against their will. “Women and children are being deported en masse from Donetsk and Luhansk regions,” parliament’s human rights commissioner Lyudmyla Denisova wrote on Facebook.

According to the US government, the Russian military is still struggling with significant logistical issues. There are shortages not only of food and fuel, but also of equipment for soldiers, a senior Defense Ministry official said. “We have received indications that some soldiers have frostbite and have been withdrawn from combat. So you continue to have problems with logistics and supply.” Russian troops also had trouble communicating with each other.

The Pentagon official attributed the logistical difficulties faced by the Russian forces to continued resistance by the Ukrainians and poor planning. Difficulties in fuel supply would also affect the Navy. “They are worried about being able to continue fueling their ships.”

The government official said Russian forces are now likely to be firing from the sea at the particularly disputed port city of Mariupol. In the Sea of ​​Azov, the Russians would have assembled around seven ships for this purpose. The Pentagon representative again raised serious accusations against the Russian armed forces. Clear evidence was seen that the Russians had deliberately targeted civilians over the past week, he said.

Both warring parties report that they are gaining ground

The Ukrainian side reported successful attacks. In the air, nine Russian targets were hit in 24 hours. According to the Ukrainian government, three escape corridors were to be opened in the particularly disputed city of Mariupol on Tuesday; it was unclear if this was successful.

But Russia also reported military progress. The Russian military reported a new advance from the Donetsk and Luhansk regions in eastern Ukraine. According to the Russian Defense Ministry, fighters from the self-proclaimed Donetsk People’s Republic advanced another four kilometers. Fighting for the capture of three villages near the city of Donetsk. The village of Uroshajne was taken to the southwest. Additionally, fighters in the Luhansk region gained control of at least three other locations. The General Staff of Ukraine did not agree.

UN Secretary General Guterres said in New York that Russia could not win the war. “Ukraine cannot be conquered city by city, street by street, house by house. Sooner or later you will have to switch from the battlefield to the peace table.” The Portuguese called for an immediate ceasefire. Continuing the war is morally unacceptable, politically unacceptable and militarily senseless.