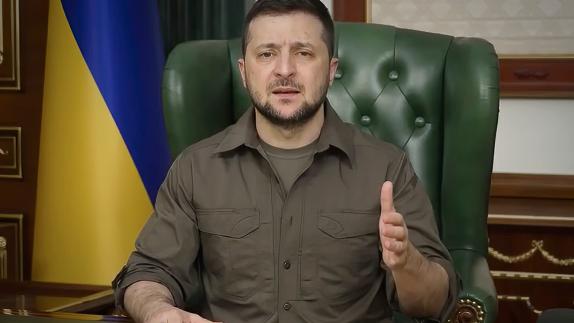 kyiv (AP) – In a video message to all Ukrainians, the head of state Volodymyr Zelenskyj called on his compatriots to resist and persevere.

With a view to the ongoing negotiations with the Russian side, he hinted that any agreement with the opponent would have to be submitted to the Ukrainian people for a referendum.

Selenskyj wants all the agreements reached in the negotiations with Russia to be decided by referendum throughout the country. The head of state announced it on Monday night on television. The final form of the compromises with Russia on security guarantees and on the occupied areas of Ukraine must be approved in a referendum. Both parties to the conflict are currently negotiating with each other. However, there are no concrete agreements yet.

The negotiations with Moscow are initially about a neutral status for Ukraine and international security guarantees for the country. “To find a way out, you have to take a first step,” Zelenskyj said. “And when we’ve done that, we can talk.” He would then be ready to talk about the occupied territories in a meeting with his adversary, Kremlin chief Vladimir Putin. This means Crimea and the self-proclaimed breakaway People’s Republics of Luhansk and Donetsk. Among other things, Moscow demands that Crimea be recognized as Russian territory.

He does not expect to solve all the problems in talks with Putin. “But there is a chance to resolve some of that, to end the war,” Zelenskyy said. At the same time, he warned Putin not to continue the war: “By destroying us, Putin is destroying himself.”

The Russian newspaper Komsomolskaya Pravda, close to the Kremlin, published a large number of Russians allegedly killed in Ukraine, then deleted them. An online article on Sunday, citing the Defense Ministry, said that 9,861 Russian soldiers had been killed since the war began, according to an archived version of the text. That would be significantly more than the 498 dead that Moscow has officially confirmed so far. A few hours later, however, the relevant passage from the article in Komsomolskaya Pravda had disappeared again.

Ukraine’s presidential adviser Mykhailo Podoliak commented on Twitter that “the Russian art of lying” is no longer helpful. “A disaster for Russian propaganda, but in the real world there are almost twice as many dead Russians.” According to the Ukrainian account, nearly 15,000 Russian soldiers have been killed since the start of the war.

Selenskyj calls for resistance and perseverance

In the face of increasing violence against civilians in Ukraine, President Zelenskyy has called on his compatriots to resist Russian troops and persevere. In a video message distributed Monday night, he appealed to Ukrainians to do everything possible to protect the state. “To save our people. fights Fight and help!” The head of state, who was in kyiv, called for the “invaders” to be expelled. “So that Ukraine lives, and all of us together with it, free and in peace.”

In his speech to the “great people of the great Ukraine”, Zelenskyy called the Russian military “tourists with tanks” and “slaves of their propaganda that changed their consciousness”.

Ukrainian counterintelligence has stopped a possible assassination attempt on President Selenskyj according to their own statements. A group of Russian saboteurs, led by a secret service agent, was arrested in the city of Uzhgorod, in the border triangle between Ukraine, Slovakia and Hungary, the Unian agency reported Tuesday night.

In addition to the attack on Zelenskyy in kyiv, the order of the approximately 25 men also included the execution of a series of acts of sabotage in the government district and in other parts of Ukraine.

Apparently, in anticipation of Russian attacks, the mayor of Boryspil has asked civilians to leave the city. His call also applies to all civilians who have fled from other parts of Ukraine to the city southeast of kyiv, Volodymyr Borisenko said Tuesday night.

The call for evacuation was made for purely tactical-military reasons. “The experience of other places that are being fought over has shown that the job of the armed forces is easier when there is less civilian population in the city,” Borissenko said.

The United Nations General Assembly is scheduled to meet on Wednesday to consider another resolution related to Russia’s war of aggression against Ukraine. The draft resolution titled “Humanitarian Consequences of Aggression Against Ukraine” was expected to receive wide approval in the largest UN body with 193 members.