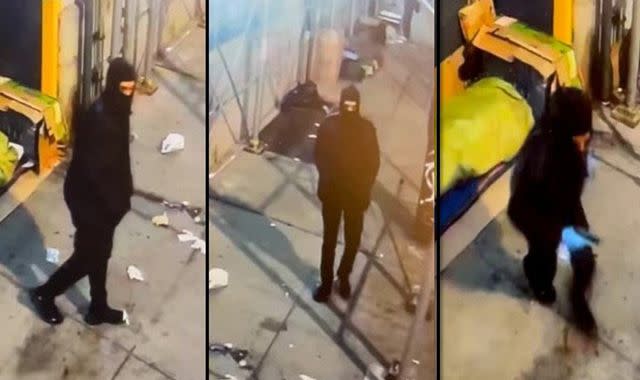 A man is being sought by officials in New York and Washington DC, in connection with the murders of two homeless people.

The man is believed to have attacked several people sleeping in the streets, killing two and wounding three others, police said.

Police in the District of Columbia said Sunday they are working with the New York Police Department to find the man who fatally shot and stabbed a man Wednesday in the capital and killed another man in New York on Saturday.

The suspect shot and wounded two other homeless people in early March in Washington and another person in New York, authorities said.

Police believe the attacks were committed by the same person because the shots and evidence from the scenes were similar.

The victims were attacked without provocation, police added.

In Washington DC, the first attack occurred on March 3 at 4 am and the victim survived.

Another man survived a shooting on March 8 and a body was found the next day when police spotted a tent on fire, according to the joint police statement.

The first shooting in New York happened around 4:30 a.m. Saturday and left the man wounded.

Another shooting is believed to have occurred around 6 a.m., but the victim was not found until Saturday night when someone reported a man in the street with gunshot wounds, police departments said.

He was pronounced dead at the scene, police added.

None of the victims’ identities were released.

The NYPD is being offered a $10,000 reward for anyone who helps find the suspect.

“This individual approached the two men, one at a time, you see him looking around to make sure no one was around, kicking the homeless man, making sure he wasn’t asleep, and he just killed them.

“The case is a clear and horrific intentional act of taking someone’s life, it appears because he was homeless.

The attacks are similar to the killings of four homeless men as they slept on the streets of New York’s Chinatown in 2019.

Randy Santos, another homeless man, has pleaded not guilty to those attacks.

Honest Ideas: This Is What Samira Klampfl’s Post-Baby Body Looks Like