Violence destroys the oasis of Chiapas 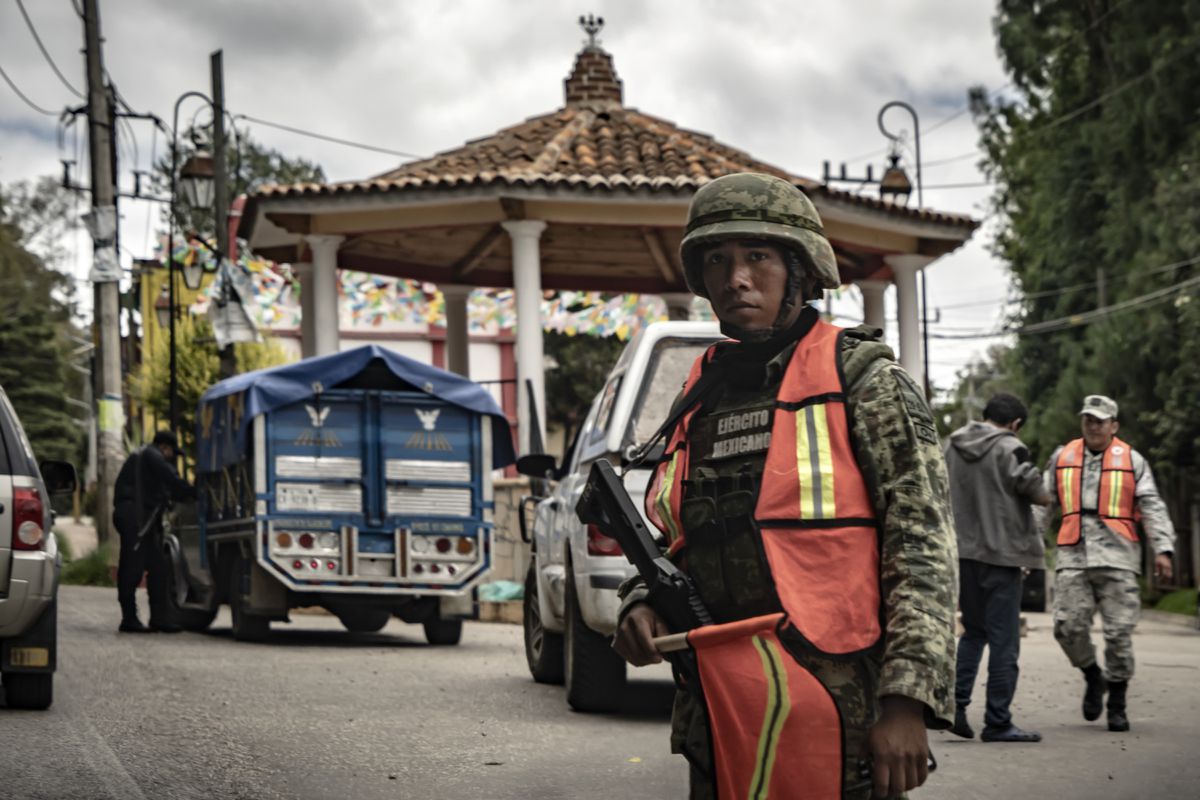 To explain what happened at the market on Tuesday, the greengrocer asks his daughter to go get something at the back of the stall. The young woman returns with her fist clenched, and when she opens her hand, seven golden shells the size of an almond appear. “When we arrived the next day, we picked them up from the ceiling and off the floor. I wasn’t there, but they shot with powerful weapons,” says the shopkeeper, who is afraid not to give his name. Her daughter was there and she saw around noon dozens of hooded men, dressed in bulletproof vests and armed with assault rifles, gunning down the five aisles of the North Market of San Cristóbal de las Casas, the tourist center of San Cristóbal de las Casas, Chiapas.

It all started a little earlier in the parking lot of a mall a few blocks from the market. “Some black vans and many motorcycles arrived. They got out and the shooting started,” says one of the workers in the area who collect the empty shopping carts. “We ran to the store. Shots could be heard. We spent a while there with the customers on the floor. They gave us a soft drink and a bolillo to scare us,” says the man, who also does not give his name.

For more than four hours, the northern part of the city (population 215,000) became a trench of war: burning cars, blocked roads and armed squads in broad daylight. All this under the impotent gaze of the authorities. The mayor admitted he felt overwhelmed and it took the military hours to arrive.

Scenes like this have already been seen in Mexico. But they are more common in the border towns of Tamaulipa or in the historic cradles of organized crime like Guadalajara or Culiacán. This had not happened in Chiapas, one of the poorest and most forgotten states in the country, where drug violence appeared to be concentrated closer to the southern border. Even less so in San Cristóbal de las Casas, a seemingly quiet colonial town nestled in a valley of pine and oak trees.

Base camp for routes through natural parks and archaeological Mayan ruins, the survival of several indigenous communities is another tourist attraction in the area. The neo-Zapatista uprising of the 1990s against the misery and marginalization of its people put San Cristóbal even more on the international map. Young foreigners, fascinated by the rebellious Native Americans, still coexist with the American retirees who have bought homes here, with the boutique hotels, signature restaurants and art galleries.

The war turmoil we witnessed this week broke the mirage. The bullets in the market have resurfaced the old latent conflict of exclusion, racism and structural violence, now adding the explosive component of drug trafficking networks. Market traders have named businessmen and local tribal leaders as responsible for the attack. “They have money and can pay the Motonetos to riot and spread fear,” says the owner of a chicken shop, also anonymously. The Motonetos’ name is repeated by the market stalls, but the meaning is not entirely clear: a cartel, a gang, some assassins, some thugs.

Human rights organizations that have worked in San Cristóbal for decades consider them “shock groups,” squads serving the highest bidder. Marina Page, Coordinator of Sipaz, dates back to the colonial days when the city’s Creole landowners had the “white guards” to protect their lands and subdue the local farmers. These groups often consisted of mestizos and declassed aborigines. “Just as now, the so-called Motonetos are children of the pockets of the Tzotzil, driven out to the poorest outskirts of the city. These groups have always existed and been used by various power groups.”

The priests, another key player in understanding Chiapas and who, as a precaution, prefers not to be named in this report, support the same thesis. Of the Vicariate for Justice and Peace, set up in the 1990s to mediate in social problems, they point out that “every local leader, every politician, every businessman and now every cartel uses shock groups”. As a current example, they refer to the former PRI government, which, according to the Vicariate, brought the thugs onto the streets in order to defuse the protests of the teachers against the educational reform: motorcycles, hooded men, shots in the air.

The thesis of those close to the ground is that the bosses of the Motonetos are now the big drug trafficking groups, further increasing the violence. They are already openly talking about a fight for the place. That is, organized crime logic, according to which two rival gangs contest control of the territory. As a tourist hub, the town has traditionally been more of a selling point with the presence of local groups from the neighboring San Juan Chamula population. But the facts of the market represent a turning point. For Page, “It’s about more than a battle between merchants. Control of the market means control of carriers, roads, and trade in all kinds of goods.”

The signs that things are heating up in the Plaza de San Cristóbal have accumulated over the past year. In January, the city was besieged for hours by another group from the transport industry. In October, journalist Fredy López Arévalo, a veteran following recent events, was murdered at the door of his home. Two men on a motorcycle fired four bullets at him. Two months earlier, the same thing happened to Gregorio Pérez, Prosecutor for Indigenous Justice. Six bullets from a motorcycle. Pérez also investigated recent massacres in a nearby community.

San Cristóbal is just over three hours’ drive from the Guatemalan border and one hour from the country’s capital, Tuxtla, via the same highway. In December last year, a trailer overturned in a curve at the entrance to Tuxtla. The accident killed 55 migrants who were hidden in the back of the truck. Another 105 injured result. The event unveiled the new ways for organized crime companies. Since mid-2019, Andrés Manuel López Obrador’s government has increased controls at traditional border crossings. Under pressure from Donald Trump, he built a military wall primarily in Tapachula and Tenosique, the northern gateways on both coasts.

As if they were moles, for which they close a hole in the ground but always find another one to stick their head through, organized crime began to look for alternative routes. After the ends are sealed, the international highway that crosses the center of Chiapas consolidates as a new hole. Cities that are on this path, like Chamic or Comitán, are already suffering the consequences: curfews, roadblocks, murders and enforced disappearances. San Cristóbal and the capital Tuxtla are also on the same route to the north.

“We are outnumbered and inferior”

“In recent years, organized crime has increased in this area with the presence of antagonistic groups acting at will. The authorities do not resist them. The mayor said they were overwhelmed,” said Juan Manuel Zardain of the Chiapas State Human Rights Commission. What municipal mayor Mariano Díaz said was an admission of their weakness: “They outnumber us and outweigh us.” He also minimized the impact of the attack and denied that it was a drug-related issue.

Díaz of the Greens won the mayoralty for the third time last year. This time after a tight pulse with the Morena candidate who managed to win the governorship. Chiapas, through its ally el Verde, has been one of the traditional bastions of the PRI in recent years, greased with welfare and patronage policies that have not relieved the state of its endemic backwardness. More than 75% of the population is poor.

Chiapas and the rest of the battered Mexican south is one of the flags of López Obrador. And one of his voting pawns. Last July’s election is another key that analysts are pointing out. “It is no coincidence that the state began to warm up during the pre-campaign. When there is a change in the institutions, especially the local ones, there are usually agreements that change, that are broken or renegotiated, leading to more violence than leverage,” they emphasize from the Vicariate.

The assassination of a Sinaloa Cartel capo is embedded in this temporal logic. It was July 8, a week after the elections, in the capital, Tuxtla. In broad daylight, Ramón Gilberto Rivera, son of Uncle Gil either The Lord of the Southern Frontierone of El Chapo Guzmán’s trusted men and the entire area’s mafia boss until his arrest in 2016. His son succeeded him in office until his assassination, which has been claimed by the Jalisco New Generation Cartel, the mafia is now more powerful and involved more tentacles across the country.

President Andrés Manuel López Obrador has admitted the links to organized crime in the San Cristóbal shooting. Aside from defending his containment policy once again, as evidenced by the more than four hours it took authorities to arrive. A day before the attack, the army announced the launch of a special unit with more than 500 soldiers and national guardsmen. Barracks 31 is less than half an hour’s drive from the market where the shooting took place.

Military Camp 31 was also one of the barracks the EZLN stormed during the uprising. The starting signal was the confiscation of the City Palace of San Cristóbal on the morning of January 1, 1994, the day the free trade agreement with the USA came into force, the formation of a market turn for a PRI which at the same time unknowingly opposed the last stretch of its hegemonic party dictatorship. In the same arcades where, almost 30 years ago, the indigenous rebels shouted “enough is enough!”, four homeless aborigines now sleep. While you are in the next street between a shop specializing in wine Pinot Noir and an Irish Pub, a group of American tourists holding their belts with their thumbs and dancing the signature cowboy dance.