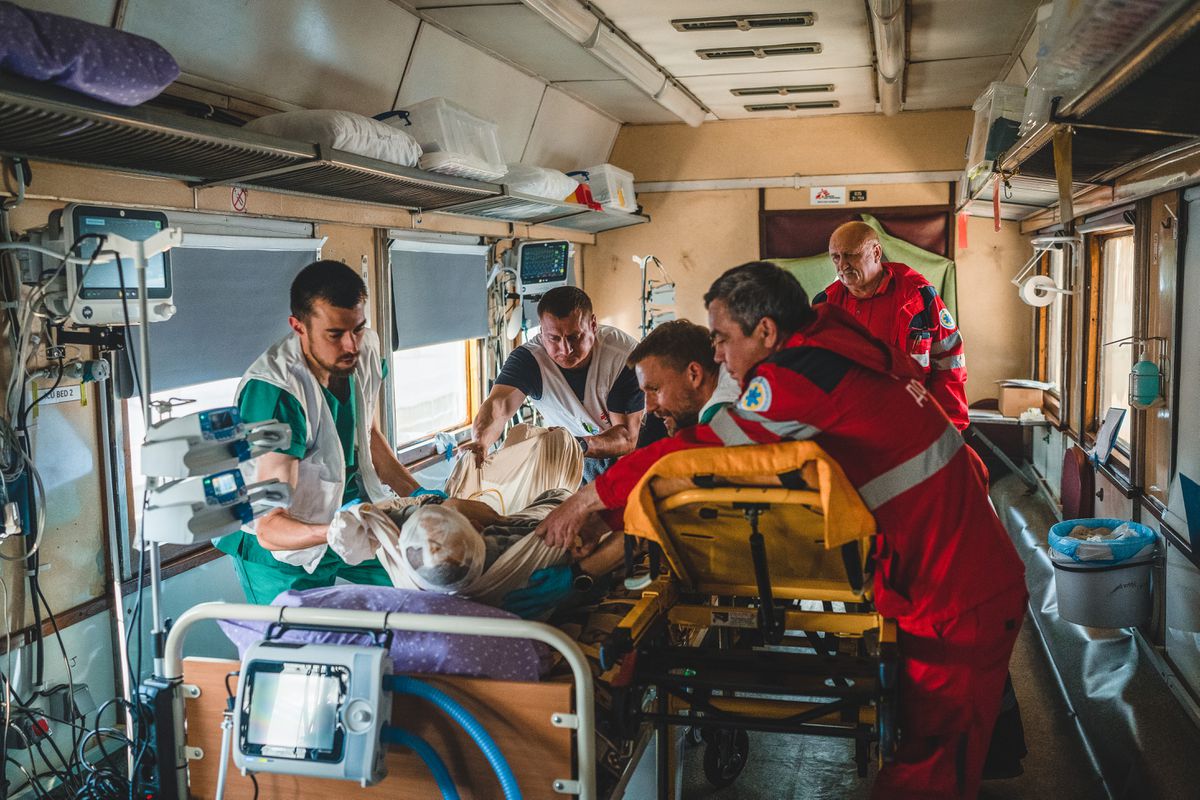 One of the trains seen from the outside Doctors Without Borders received medical treatment to evacuate wounded from eastern Ukraine is indistinguishable from anything else on the country’s rail network. But as you can see in this video, inside there are stretchers instead of seats, an intensive care unit instead of dining cars, and war casualties instead of travelers. Aitor Zabalgogeazkoa, head of the MSF emergency unit, explains how the idea came about: “We were looking for the added value of MSF in a conflict like the one in Ukraine. One of the problems they faced was transporting wounded and very vulnerable people from areas where fighting is most active to safer areas. Given the size of the Ukrainian rail network, we thought the train would be a good alternative.”

The organization got to work. It matched two local convoys and has evacuated more than 700 war casualties since March 31. The one in Ukraine is the first armed conflict in which Médecins Sans Frontières organizes such a system. “He travels the country from east to west trying to help the hospitals closest to the line of fire to move their patients and not be overwhelmed by the casualties caused by the war.” says Guadalupe García, an MSF train doctor in Ukraine.

Since they started operating, these trains have made 28 journeys. It is the local authorities who tell the NGO which patients need to be transferred to the West. “The Ministry of Health tells us the places where the hospital is most congested. We coordinate with the ministry and the hospitals the moment of picking up the ambulances, they come, we pick up the people on the train, they are stabilized, they are housed and the journey begins, which takes between 20 and 30 hours,” says Zabalgogeazkoa.

These are not easy journeys, as the rail network suffers from frequent power outages. Its destinations include cities such as Kyiv or Lviv, a thousand kilometers away from the main exit stations of Zaporizhia and Dnipro. And they have come to pick up patients further afield, in the Donbass, the area where the most intense fighting is currently taking place. “We gathered people in Kramatorsk, in Kropovsk, in Severodonetsk, in places that are directly affected right now and cannot be reached,” he adds.

In addition to the wounded and sick, doctors, nurses and maintenance personnel also travel on the trains. 25 specialists can work in the car in which the ICU was installed. Most of them are Ukrainians trained by the MSF team. “This medical train has five Level 2 beds for critical care and 18 beds for intermediate care,” says García. If necessary, they could operate with the material they have on board. Of course the convoy had to stop.

The patient’s profile has changed as the conflict has evolved. “In the beginning there were many war wounded, now there are patients with chronic degenerative diseases.” In any case, most of them are civilians. And among them children and the elderly predominate, although not all are injured by Russian shells. “We also did other types of evacuations, for example orphanages or psychiatric hospitals,” concludes Zabalgogeazkoa. Hundreds of victims left the war in these wagons. But doctors keep returning to continue evacuating the most vulnerable.