Video.. The truth of the attack on the Eiffel Tower in Paris 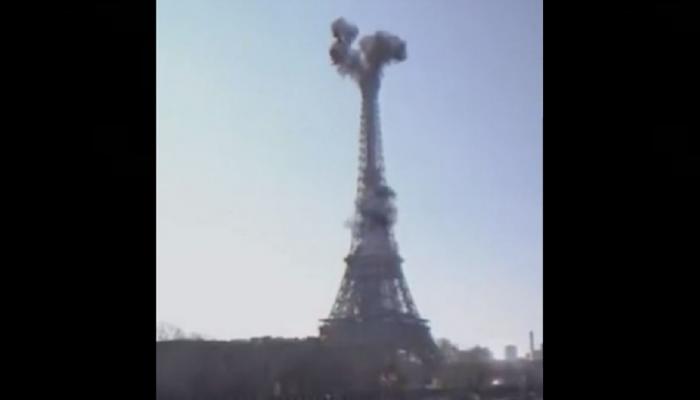 Social media users circulated a video simulating air raids on the French capital, claiming “Russian propaganda” portrayed it as a threat of a third world war.

However, the video was made by a French team and published by official Ukrainian accounts to urge European authorities to impose a no-fly zone over Ukraine, according to Agence France-Presse.

The video shows a woman trying to take a photo in front of the Eiffel Tower, which is suddenly being bombed, then war planes appear in the air and plumes of smoke rise from the tower, and the bombing affects other parts of the French capital. .

“Russian propaganda posts hypothetical videos of the bombing of Paris and the start of World War III,” the accompanying comment read.

“Will the famous Eiffel Tower in Paris or the Brandenburg Gate in Berlin still stand under the endless Russian bombardment? Do you think you are not interested? Today Ukraine, tomorrow the whole of Europe, Russia will not stop,” the accompanying text read. Verkhovna Rada account.

In addition, in the last seconds of the video, there is graffiti in English, which the video editors deliberately removed in the misleading context, in which it says: “Think for a moment: What if this happened in any European capital? Heavens”. over Ukraine or provide us with fighter planes.

Ukrainian President Volodymyr Zelensky again urged NATO on Sunday night to impose a no-fly zone over his country, saying refusing to do so would lead to “Russian missiles landing on their territory, on NATO territory.” “.

Who made the video?

The deep investigation led to the fact that the video was made by a French team, who knew the producer Jean-Charles Levy, who posted it on his account, and the director Olyas Barco, who lives in the Ukrainian capital.

In an interview with Le Monde newspaper, Barko denied that the video was made at the request of the Ukrainian authorities, saying: “I wanted to do it myself with the producer as an electric shock to the West… For me, we are in a third war. and this conflict will circulate… It’s a film that embodies what we hope will happen, not a propaganda film.”

The famous Eiffel Tower in #Paris or the Brandenburg Gate in #Sedan stand up under the endless bombardment of Russian troops?
Do you think that does not concern you?
today is #Ukrainetomorrow will be all #Europe. Russia will stop at nothing. pic.twitter.com/vi6z5UWV8q— Verkhovna Rada of Ukraine (@ua_parliament) March 11, 2022