Victims of sexual exploitation visit the players of the women’s soccer team: “I felt like a criminal for years” 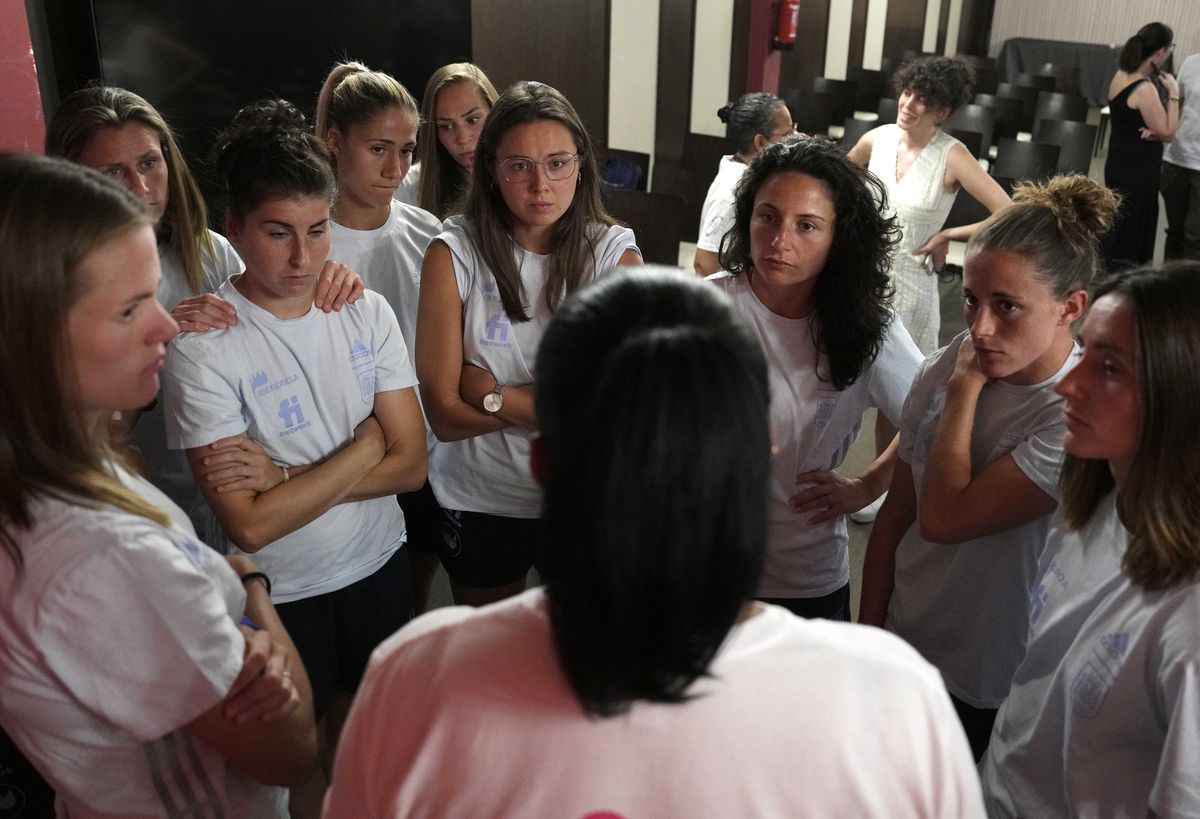 —When I saw you come in, so young and smiling, I thought: Which one of you would be a potential victim of human trafficking? The answer is: all.

Marcela, a fictitious name she chose to protect her identity due to being threatened, came to Spain 16 years ago. Someone promised him a decent job, but as soon as he set foot in Europe, he realized his ordeal as a victim of the sex trade had begun. First her pimp made her go through all the clubs in Portugal, then they stopped in Seville. “I arrived without knowing a single word of Spanish and I immediately realized that I was the worst at learning it,” he jokes, smiling to the audience in front of him, who are stunned by his statement bring. In the press room of the Ciudad del Fútbol in Las Rozas (Madrid), standing on one side and holding a microphone are four women victims of human trafficking. On the other hand, the women’s soccer team that stopped training for the Europeans to learn the story of these survivors.

“It is clear that there are many injustices in the world that we are not aware of. It’s impressive that they can tell their stories, not everyone has the same strength,” said Aitana Bonmatí, midfielder for Spain and Barcelona. For an hour, the 23 soccer players glued to their chairs could not interrupt the story of Marcela, Alina, Jeanette and Carmen, survivors who escaped thanks to the help of their pimps the association for the prevention, reintegration and care of prostitutes (APRAMP).

“The first thing people think when they see us on the street is why don’t they run away? No one knows that the pimps are always in control of us, they drug us, take our documents and threaten the lives of our loved ones if we don’t do what they say,” explains Alina (35 years old), who came from Spain a country in Eastern Europe. . She is not allowed to give her real name, nor reveal her nationality, since she managed to escape the surveillance of her exploiter and sneaked into the police station on Montera Street, a few meters from the place where she was engaged in prostitution was forced, she lives under a protective regime.

11 years have passed since this courageous act. Now she is part of the “mobile units” of the APRAMP association, the rescue groups that work to find trafficked women and help them get out of slavery. “Alina is a true leader. She is well known among her compatriots and has helped us to save many women in all the years that she has been with us,” confirms Rocío Mora, lawyer and president of the association.

The work of the mobile units is one of the topics that most excites national team players who ask about it modus operandi in rescue operations. “Finding the places where women are being exploited is the easiest. Streets, polygons, clubs with neon lights clearly visible. Knowing where the apartments are is more complicated,” explains Alina. “Then you have to be patient and manage to gain the women’s trust.” For security reasons and in order not to jeopardize the work of APRAMP, no further information can be given on these operations, which are continuously carried out in Madrid, Murcia, Almería or Asturias.

“Raise your hand, who saw it pretty Womanasks Marcella. Only four hands in public. “EITHER sky red‘ he emphasizes. Almost all footballers answer yes. “It all seems very glamorous, with lots of money, parties, gifts. But none of us made money in a brothel, the mafia get rich. The only thing we have achieved is walking away shaken and without self-esteem,” emphasizes the South American.

“I felt like a criminal for many years, not wanting to talk to the police for fear of going to jail,” recalls Carmen (42). As he tells his life – a story he says is very long and painful and which he couldn’t tell a few years ago without breaking down in tears – no one moves in the room. She left her country in Latin America in 2010, lured by a job offer that would allow her to support her children. A year later he came to Spain. In the 12 months between the start of her slavery and her release, she first traversed Turkey, where she was imprisoned in a hotel with other women for three months, and then walked to Greece, where she was forced into prostitution in an apartment.

“Have you managed to get to know your children?” asks Barcelona striker Mariona Caldentey at the end of the conversation. He replies that he lives with the little ones in Madrid and often talks to the older ones. “What can we do to help you?” stresses Irene Paredes, captain of the La Roja. “Talk about our stories,” says Jeanette. “And win the European Championship.”

- Advertisement -
Share
Facebook
Twitter
Pinterest
WhatsApp
Previous articleSelena Gomez admitted to feeling ’embarrassed’ after posing nude for one of her album covers
Next articleThe Pope appoints Secretary General and spokesman for the EEC, Luis Argüello, as the new Archbishop of Valladolid