Verdi asks that nursery notice be given again 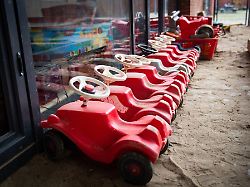 Hanover (dpa / lni) – In the collective bargaining of municipal nursery and social service employees, the Verdi union has again called all-day warning strikes in Lower Saxony and Bremen for next week. The union announced work stoppages and demonstrations for next Tuesday (March 29) and Wednesday (March 30). A second round of negotiations with the Association of Municipal Employers ended earlier this week without result. The talks have been postponed until May. Verdi had already called a first warning strike on International Women’s Day on March 8.

According to Verdi on Thursday, new warning strikes and rallies are planned in Bremen, Hameln, Hildesheim, Lüneburg, Braunschweig, Stade and Verden.

With the actions, the union wants to increase the pressure on collective bargaining for the childcare and education sector. Verdi demands better working conditions, measures against the shortage of skilled labor and economic recognition of the work done. After the second round of negotiations, the VKA bosses announced that the unions’ relief proposals were “far from reality and could not be implemented”.