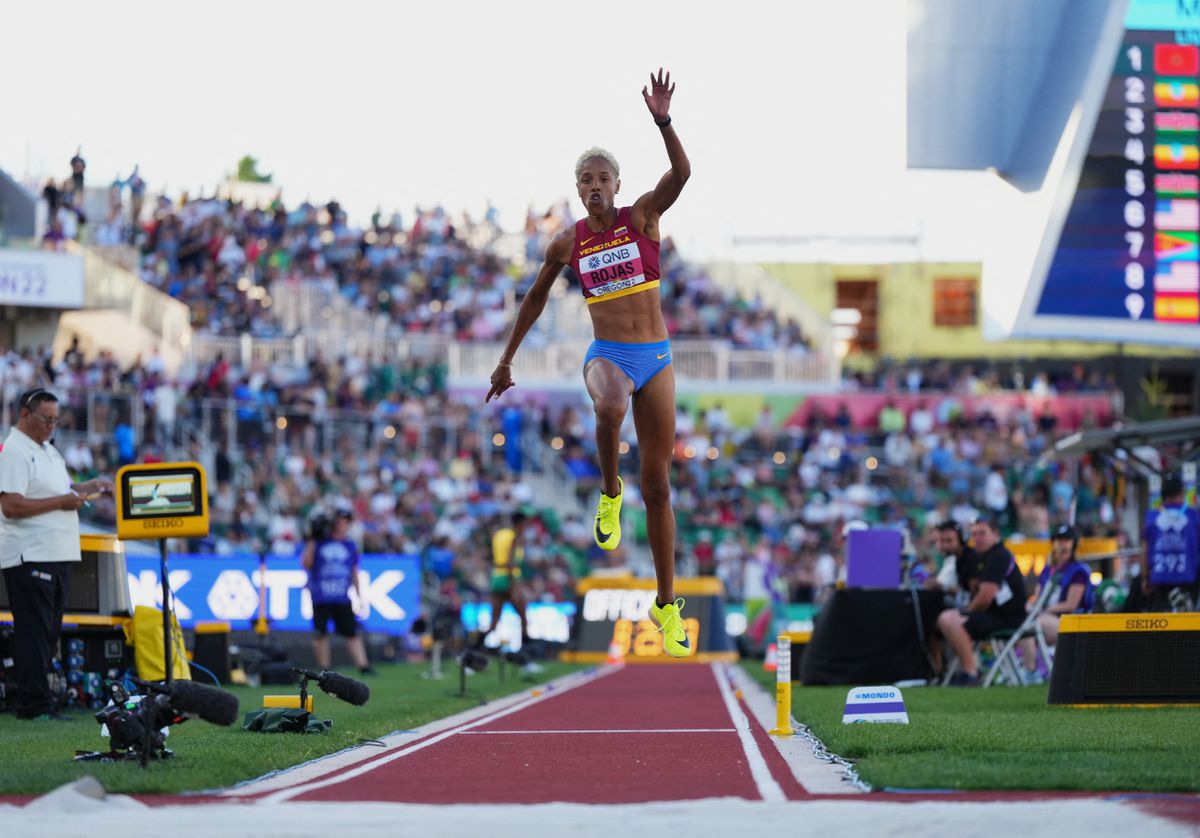 Venezuelan Yulimar Rojas became the first athlete to win three triple jump world titles on Monday, thanks to a mark of 15.47 meters that earned her gold at the world championships in Eugene. Rojas, holder of the world record (15.74 meters), confirmed her overwhelming dominance in this discipline by defeating Jamaican Shanieka Ricketts, who took silver with 14.89, and American Tori Franklin, bronze with 14.72. Cuba’s Leyanis Pérez, 20, stayed on the edge of the podium with a jump of 14.70 meters, finishing fourth.

Rojas, Olympic gold medalist in Tokyo 2020, now has three gold medals at the outdoor World Championships (2017, 2019 and 2022) and three more indoors (2016, 2018 and 2022). Rojas, 26, finished the competition with a second vault of 15.47, the best mark of the season. When his cry of joy after Olympic gold rang out in the empty grandstands of Tokyo last year, he enjoyed the support of around 10,000 fans in Eugene, who asked for his support from the very first jump. After a disappointed murmur at his first and discreet mark of 14.60 meters, Rojas demanded with his hands that they would have a little patience that the show was coming soon. Jamaican Rickets, the last to jump further than Rojas in a competition in 2019, led the competition with a starting jump of 14.89 meters. Rojas didn’t want to wait any longer and caused a general astonishment with a second jump of 15.47 meters, the best of the whole season and now celebrated it in the stands. Rojas first raised his knees to mimic basketball player LeBron James’ classic celebration and then pointed his fingers at the track, ending the fight for gold. Only one of her eleven competitors had managed to cross the 15-meter mark in her career, Portuguese Patrícia Mamona (15.01).

With her third world title practically in the bag, the Venezuelan had four jumps to attack other exploits. Just three centimeters away was the World Cup record, which will continue to belong to Ukraine’s Inessa Kravets (15.50). Ahead lay his own world record (15.74) and, on an unexplored frontier, his great personal goal of flying up to 16 meters. On the third try he stayed at 15.24. As in every corner, Rojas approached the front row to listen to his coach, Cuban multi-time long jump champion Iván Pedroso, polishing the Caracas diamond in Guadalajara, Spain, both technically and emotionally since they met via Facebook in 2015.

In the fourth and fifth jumps he risked more than necessary and they were zero. He was left with a sixth and final attempt, tying the two world records he broke last year. “The Leap of Glory,” as Rojas calls it, this time he stayed at 15.39 meters, but after checking the marker, he quickly turned around, let out a whoop of joy and ran to the stands to look for a Venezuelan flag to seek to run the route. With this triumph, Venezuela counts in its history at the World Athletics Championships with three gold medals from Rojas and a bronze medal from Robeilys Peinado in the pole vault in London 2017. In the current edition of Eugene, Latin America adds three gold medals. Along with Rojas, Peru’s Kimberly García (20km walk) and the Dominican 4×400 mixed relay also climbed onto the podium.