Valencia opens the most unique CaixaForum: a futuristic landscape in an iconic building 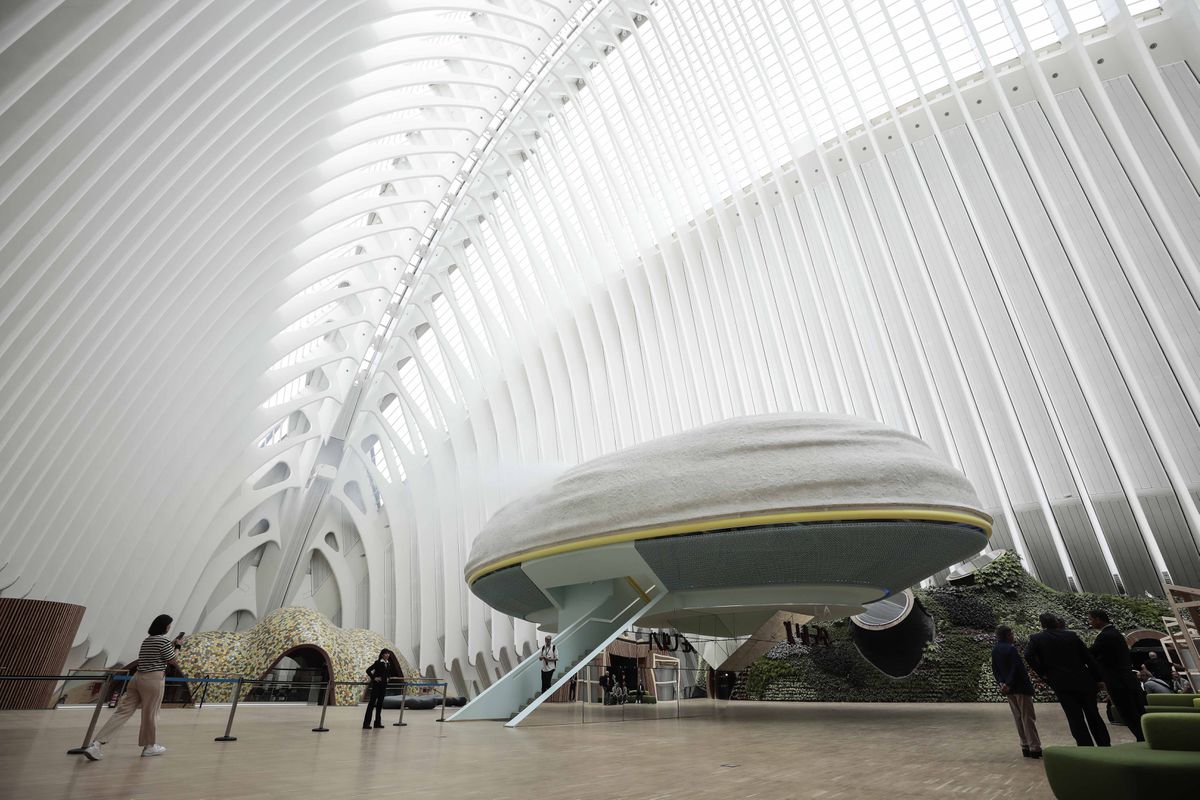 Landscape was the most repeated word of architect Enric Ruiz-Geli this Tuesday during the presentation of the ninth CaixaForum that will open in Spain. A futuristic-looking landscape of multiple capsules grown in the bowels of El Ágora, a vast, empty building designed by Santiago Calatrava. In this dialogue lies the greatest uniqueness and spectacularity of the new cultural and social center that opens its doors to the public this Wednesday in the also iconic Ciutat de les Arts i les Ciències in Valencia.

The metal structure, designed by the Valencian architect, has white whalebone ribs, up to 80 meters high, that now house a public square with oak steps, beneath which are two exhibition halls; a restaurant covered by a garden with animals that look like something out of a sci-fi movie; a shop, a bookshop and some offices clad in molecular ceramics, sitting on a frame in the shape of a “moose palm tree”; an auditorium with an ecological installation by Frederic Amat and a playful and educational cloud dedicated to artificial intelligence that looks like a spaceship and is the most striking element of this landscape.

However, this “landscape of living cells” can only be considered an architectural work if it is “breathed” by the people, by the visitors, emphasizes the Catalan Ruiz-Geli. It is the first time that an architectural competition has been won without a building but with a landscape, adds the author of the El Bulli de Ferran Adrià Foundation, jokingly.

The la Caixa Foundation has invested 19 million euros in the recycling of the building, which occupies 10,000 square meters. To this figure must be added the disbursement of almost a hundred million by the PP-ruled Generalitat for the construction of the Ágora, which opened in 2009 without completion. Since then it has hosted a few tennis championships and fashion shows and a campus party. with leakage problems before closing in 2015. Controversy accompanied the project from the start due to the lack of definition of its content and its cost overruns.

Now the building comes to life with a dialogue between the work of Ruiz-Geli and that of Calatrava, although the former admits not having spoken directly to the latter. The communication was established through the City of Arts, which breathes by providing content for the blue and white space, which is expected to attract between 500,000 and 700,000 visitors per year.

The program, which will cost five million annually, begins with the exhibitions pharaoh. king of egyptin collaboration with the British Museum, and horizon and border. landscape visions, conceived for the center of Valencia from the rich contemporary art collection of the Fundación la Caixa. In addition, La Nube offers an interactive experience designed especially for the youngest.

Two permanent works by two Valencian artists have also been installed: arch to the skyby Inma Femenía, reproducing the optical effect of the rainbow inside the CaixaForum, and stilt houseby Anna Talens, a sculpture outside in the pond, referring to the agricultural architecture to keep the boats away from the nearby Albufera.

This Tuesday it was a bit hot in the public space of the CaixaForum, not in the various closed rooms where there are air conditioning. The digital “temperature-controlled air management” that allows doors and windows to be opened and closed and excess air in the rooms to be used via grilles on the floor has not yet been activated, explains Ruiz-Geli. That will happen shortly, adds the architect, who defends the sustainable use of natural air conditioning in a vast space and rejects the large air cannons used in airports, for example. The architect ensures that energy consumption and pollutant emissions are lower than in any museum.

The delegation for the official presentation this Tuesday was led by the President of Valencia, Ximo Puig, the Mayor of Valencia, Joan Ribó, and the President of the Fundación la Caixa, Isidre Fainé, in the presence of representatives from the business world such as Juan Roig and others. It was Puig who, years ago, suggested to Fainé the possibility of Ágora hosting a CaixaForum in Valencia, the city to which Caixabank subsequently moved its headquarters in 2017 process in Catalonia and the purchase of the Bank of Valencia. The Generalitat ceded the space for 50 years.

The person in charge of the foundation claimed that a project is “so extraordinary and of such magnitude” as this new cultural center, which is also “a dream within other dreams” since the CaixaForum is inserted in the Ágora and therefore in the city of Art and in the city of Valencia himself. The socialist Ximo Puig pointed out that he assumed that this “emblematic” center would form “a cultural pole of the first magnitude in Europe” and help to strengthen the vision of the City of Arts as a “cultural bastion”. , and stressed that It will strengthen Caixabank’s ties to the Valencian Community with an investment of almost 300 million euros over 50 years for the progress of this country. The Mayor of Valencia, Joan Ribó, from Compromís, pointed out that this “first class” cultural center puts Valencia “on the level of the big Spanish cities”, it will also be “a claim for cultural tourism”.

As part of the cultural program, six exhibitions are opened every year. The first three travel through the past, present and future. pharaoh. king of egypt With 137 exhibits, among which gold and silver work and monumental statues stand out, it brings visitors closer to a civilization that has not lost its allure. The pharaohs ruled 5,000 years ago and until the Roman conquest 30 years before our era. This exhibition has been shown at the CaixaForums in Madrid and Palma de Mallorca and will be on view in Valencia until February 23 next year.

horizon and border. scenic visions, based on funds from the Contemporary Art Collection of the “la Caixa” Foundation, brings together 31 works by 24 artists such as Courbet, Miró, Victoria Civera, Tacita Dean, Nicolas Faure and Anglada-Camarasa. The curators are Nimfa Bisbe, responsible for the collection, and Manuel Laguillo. It will close on January 8, 2023.

And finally, the interactive experience in The Cloud of Education in the age of intelligence artificially invites you to learn about the educational potential of this technology by July 23, 2023.

The company has numerous activities planned for the first few weeks, including the first edition of Summer Nights, bringing together music, poetry, cinema and the performing arts. To celebrate the opening, there will be open days from June 22nd to 30th, with tickets already fully reserved. Yes, you have free access to the central public space called Ágora as well as the facilities. Admission tickets are only required for the exhibition halls.

- Advertisement -
Share
Facebook
Twitter
Pinterest
WhatsApp
Previous articleThe PSOE, PP, Vox and Ciudadanos slam the widespread use of co-official languages ​​in Congress
Next articleMaroto highlights the relevance of Siro’s profitability plan and his disappointment with the actions of the C&L board